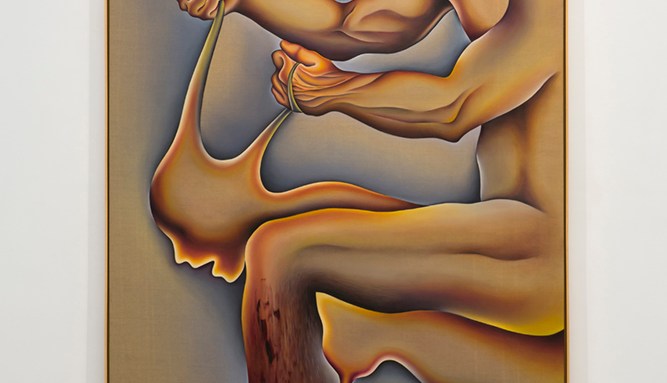 This exhibition comprised paintings—made in airbrushed acrylic and oil—from Judy Chicago’s 1982–87 series “PowerPlay,” in which the feminist artist allegorized tropes of masculinity and the issues and misconduct that can occur when men wield the power and privileges afforded them. While it was easy to see the work as prophetic of the era of Trumpian politics and #MeToo, the patriarchal structures that Chicago examined have of course long existed—in fact, their entrenchment in Western society is a central theme of the series.

The show began with a selection of nine-foot-tall canvases. At once beautifully rendered and discomforting, these works portray glowing, godlike male figures who emit an aura of self-satisfaction as they carry out brazen acts of domination. Pissing on Nature (1984) depicts a faceless man unleashing a torrent of Technicolor urine on the landscape over which he towers. He appears either unapologetic for his impropriety or too self-involved to recognize it. The painting speaks to the sort of attitude that today lies behind “make America great again”—a call to action for those who wish to return to a world in which, among other things, man can mark whatever territory he wishes as his own—and might even be read as a satirical version of Genesis, one in which man raises the earth from its primordial origins through his waste.

Directly across from Pissing on Nature was Crippled by the Need to Control/Blind Individuality (1983), which features a man looming over and nonchalantly pulling the hair of a woman, who helplessly submits, the two representing an all-too-familiar gender dynamic. Mirroring the urine in the facing work, a stream of milk flows from the woman’s breast, signifying her ability to create and sustain life but also the social dictates that she do so. Interestingly, the male figure—this embodiment of patriarchal authority—is rendered in far more detail (sinewy musculature, expressive body language) than the female, who is relatively featureless and generalized. He remains calm while she appears to be screaming. The image serves as an effective representation of the fully realized systems of power that seek to bury acts of violence on the female body.

In a subseries of “PowerPlay,” titled “Disfigured by Power,” Chicago inflicted violence on the male form instead, depicting men who have been physically and psychologically damaged by the hegemonic roles they occupy. Some of them look less clearly pained than others but compromised nonetheless. While the man in Disfigured by Power 2 (1984) seems to be wailing in abject horror, for instance, the subject in Disfigured by Power 3 (1984) grins maniacally, even though a strip of flesh has been torn from his face. Together, these two faces suggest gruesome versions of the tragedy and comedy masks.

With “PowerPlay,” Chicago envisioned a transparent world in which the vices of men could be laid bare. Examining the psychology and consequences of male domination, she created an unforgiving realm populated with men who seem at once detestable and pitiable, whether they are carrying out egregious acts or spectacularly crumbling before our eyes as they attempt to command forces beyond their control.