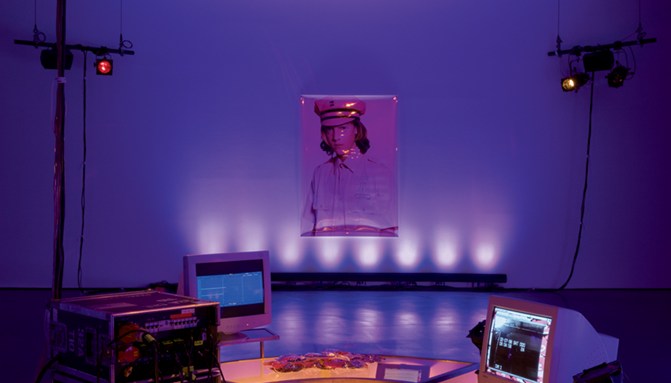 We willfully engage in acts of self-surveillance, argues communications scholar Sun-ha Hong, as the result of a certain “technological fantasy . . . that machines will know us better than we know ourselves, [demonstrating] a kind of ‘knowing’ that embraces modernity’s epistemic virtues of accuracy and objectivity.” This desire for intimacy via surveillance seemed to inform the works in Julia Scher’s exhibition at Esther Schipper, “Wonderland,” which provided a focused look into her practice since its beginnings, in the late 1980s. A longing to be known is palpable in her Discipline Masters (1988), a four-hour confessional video in which she exploits the camera’s capacity for furnishing evidence. She talks about her life since childhood, the video’s length turning the personal information into biggish data. Viewers aren’t expected to watch all four hours: the work is scaled to machinic, not human, capacities for data input. Scher bares all, bares too much, to the point that it’s boring, discussing, for instance, how her mother forbid her from eating slices of bread from the middle of the loaf. Scher fights surveillance with surveillance, seeming to give her life story away before it can be taken from her, which is perhaps no fight at all.

The show’s title work was an installation presented at the Museum of Contemporary Art Chicago’s 1997 exhibition “Performance Anxiety” and shown in expanded form at Andrea Rosen the following year. It was recently digitized and now includes a pink, 3D-printed Alexa virtual assistant. Wonderland is an office for monitoring surveillance footage, scaled to put children in the position of authority. It has small chairs, pink and purple lights, some dated computers, and a short desk covered in candy. While a kid would not have hesitated to take the candy, I was unsure if I could, unsure if it was art and therefore protected, unsure if I was being watched. On the surrounding walls were fun-house mirrors and photographs of children in customized pink (read: unthreatening) caps and uniforms, including a school-age Lena Dunham. A voice tells visitors, “Attention. There are live cameras here in Wonderland, recording you. . . . Warning. Your size may change here in Wonderland. Thank you for coming!” The voice is that of Kathryn Beaumont, who was both Scher’s kindergarten teacher and the voice of Alice in Disney’s original Alice in Wonderland (1951). “Your size may change” in the distorting mirrors. “Your size may change” if you’re converted from protector to protected. Kids are constantly watched: before the panopticon, there was the panoptic-mom, who surveils because she cares. Of course, kids today are growing up under constant technological surveillance, and they’re often more fluent at controlling surveillance technologies than adults.

The work’s subject feels quite timely, despite major changes in technology: the constancy of being watched and the accumulation of personal data have only increased since the ’90s. Scher astutely and playfully upends the binary of protector and protected along the lines of gender and age, but absent from this equation is the threat. The camera, we know, does not simply furnish “accuracy and objectivity.” It can also be used to reinforce existing beliefs. Scher’s strategy of willful self-surveillance or surveillance as fun-house or intimate exchange is suited only to people sharing mutual trust with those in power. Surveillance apparatuses are often focused on protecting (or mining profit from) white women and children, while men of color, generally regarded as objects of suspicion, are put at greater risk through surveillance-type scrutiny. Scher is right that surveillance is like intimacy, but intimacy here requires a mutual trust that is not available to everyone.