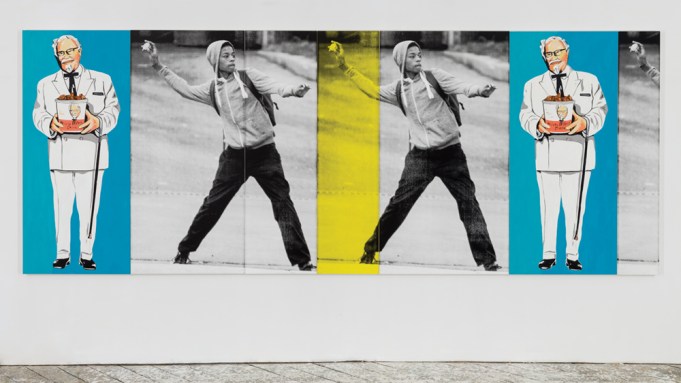 In 2014, President Barack Obama made an offhand remark saying that young adults might be served better by vocational training than by an art history degree. The response from the art community was swift and severe, and Obama later apologized. His critics argued that looking at art is crucial for the development of visual literacy and that this skill is especially important today, given the constant streams of images we encounter on digital screens. Julia Wachtel’s recent show at Elizabeth Dee, “Displacement,” seemed to put forth a similar argument.

The nine paintings on view (all but one from 2017) appropriate material from the everyday flow of circulated images, such as a New Yorker cartoon, a shot from a Fox News broadcast, and various brand mascots. Made in her trademark style, they comprise multiple screen-printed or hand-painted canvas panels placed side by side in friezelike constructions that center on narrative disjunctions. In Picnic, for instance, a scene of gun enthusiasts taking aim is interrupted by a cheery cartoon dog giving a thumbs-up gesture. Meaning in Wachtel’s work arises from such combinations rather than from any individual image. While this approach has been central to her practice since her early years as part of the Pictures Generation, the new paintings have a temporal specificity and political edge that much of the previous work lacked.

In Stone (2015), two screen prints of a photograph of a hooded black adolescent winding back his arm to lob a rock, presumably at an antagonist, are bookended by paintings of Colonel Sanders hawking a bucket of fried chicken. Created at a time when episodes of police brutality toward young black men are increasingly exposed, Stone seems to cast the anonymous black youth as a cultural hero, his duplication and stance rendering him a latter-day version of Warhol’s gun-toting Elvis, while Colonel Sanders—bearing, of course, a food that has often figured in racist depictions of African Americans—appears as a caricature of the genteel white Southerner. But while the work seems to elevate the young man, it also shows that context and framing are crucial to the production of meaning, that images, in other words, are ideological and never entirely objective. In The Space Complexity of an Algorithm, logos of social media platforms float in a Facebook-blue field that separates a stumped-looking man from the simple yet unsolved arithmetic problem on the whiteboard in front of him. The question at the heart of this painting seems to be: has the instant gratification of social media dulled the capacity for analytic thinking?

Opening almost exactly one year after President Donald Trump’s election and closing one year after his inauguration, the exhibition served as an explicit critique of the current sociopolitical environment and (as shown in Target, in which the eponymous concentric circles appear over a big-bellied, half-dressed man standing beside a dresser displaying a Trump-like coiffed wig) of the sitting president. At a moment characterized by 24/7 cycles of news coverage, Wachtel’s compositions seem oddly homeopathic, each its own lesson in how to read a picture.

Kazuki Takahashi, Creator of the ‘Yu-Gi-Oh’ Manga Series, Dead at 60

First Look: Beyerdynamic Enters the World of Wireless Earbuds With the Free BYRD