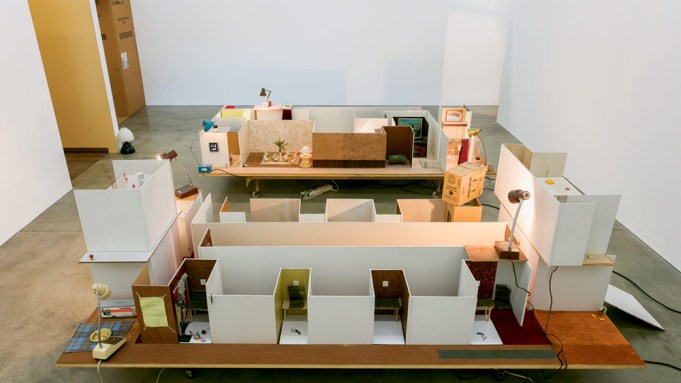 The late artist Julie Becker grew up in Los Angeles and reflected the city’s dual mythology of Hollywood glamour and broken aspirations in her understated installations, films, photographs, and drawings. As seen in this beguiling exhibition, “I must create a Master Piece to pay the Rent” (titled after a phrase from one of her drawings), her most powerful works allude to the kind of transitory living spaces Becker herself inhabited; although these works emit a gothic, somewhat horror-movie-type menace, more chilling is their pervading air of alienation.

Becker’s representations of life on society’s margins render reality and fantasy almost indistinguishable. This is particularly apparent in her elaborate installation Researchers, Residents, A Place to Rest (1993–96), which she began while an MFA student at CalArts and which was shown in the 1996 Bienal de São Paulo. The work mixes administrative themes and motifs of transience, and consists of three connected spaces: a room with a desk and interchangeable nameplates bearing phrases such as WAITING ROOM and REAL ESTATE AGENT; a central area containing cardboard refrigerator boxes and two architectural maquettes portraying rows of impersonally furnished spaces that resemble halls in single-room-occupancy housing; and a researcher’s domain crammed with paraphernalia such as a typewriter, files, cassette recorders, suitcases, and sleeping bags. To disquieting effect, many of these last sorts of objects also appear in miniature in the SRO-like maquettes. The potential for adventure and danger in solitary spaces is conveyed in the installation through references to the heroine of Kay Thompson’s Eloise books, a young girl who lives in the penthouse of the Plaza Hotel in New York, and to Danny Torrance, the psychic boy in Stephen King’s novel The Shining whose father is caretaker of the haunted Overlook Hotel.

For two films, Becker gave classic American movies different soundtracks. Transformation and Seduction (1993/2000) shows an angelic-looking girl from Disney’s The Gnome-Mobile (1967) wandering a sun-drenched forest as a male narrator recites reworked text from Vladimir Nabokov’s novel Despair (1934). When he describes seeing “the flawlessly pure image of my corpse” in the traits of a girl who sounds like the one on-screen, a sense of foreboding is cast over the scene. For the film Suburban Legend (1999), Becker took up the familiar suburban-teenager practice of combining Pink Floyd’s 1973 album The Dark Side of the Moon with The Wizard of Oz (1939). The viewer is equipped with a remote control and instructions for finding coincidences, such as the lyric “balanced on the biggest wave” being sung at a moment when Dorothy teeters on a fence. Both Transformation and Seduction and Suburban Legend speak to a rejection of the American idyll peddled by Hollywood, drawing forth a kind of shadow world and linking to the evocation of the tough reality of American poverty in Researchers.

Photographs and a video from a sprawling project, “Whole,” that Becker started in 1999, also made reference to that reality, centering on the shabby Echo Park house that a bank let her rent cheaply on condition that she dispose of the belongings of its previous occupant, who had died of AIDS-related complications. The bank is the video’s protagonist, appearing as a capitalist beacon in footage the artist shot from her window and in the form of a model being hoisted through a hole between floors of the house like loot in a robbery, the latter sequences hinting at the seamy side of finance. Whimsical, spindly-lined drawings depicting an alternative world of dreamy castles, silver televisions, and money-making machines were also on view, further illuminating the anxieties at the heart of this slow-burn exhibition, the loneliness and estrangement occurring behind the scenes in large cities plagued by social inequity. Becker took her own life in 2016, after a long struggle with drugs and mental illness. It feels as if her quietly subversive voice had a lot more to say.