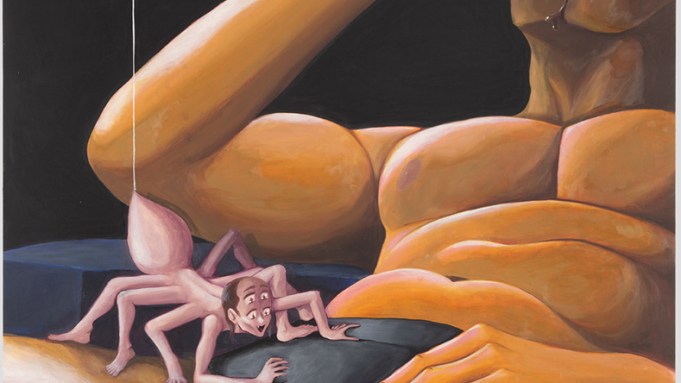 I encountered Julien Ceccaldi’s work on social media long before ever seeing it in person. A few years ago, his manga-inspired comics, in which exaggerated figures—either hyper-fit or thin as rails, with conical chins and clusters of wildly lashed, wet eyes—undergo personal dramas, started to appear all over the English-speaking corners of my Twitter timeline and Instagram feed. Recently, I clicked “like” on an ad campaign Ceccaldi produced for the über-trendy Berlin-based fashion brand Ottolinger. Given his enthusiastic reception by the New York art world, whose influence inevitably travels south—and north, west, and east—I was not at all surprised when the young artist landed at House of Gaga for his first solo show in Mexico City.

The seven oil paintings on canvas and two painted sculptures in the exhibition (all 2019) depict an emaciated, balding, androgynous man named Francis, the protagonist of Ceccaldi’s self-published comic “Human Furniture” (2017), which follows Francis as he obsessively pines after the swole Simon and has anonymous sex. The show was titled “Sex Is Work,” and indeed the paintings suggest the emotional labor that accompanies the act. In Out the Window Towards the Bavarian Castle, Francis—fully naked, with spindly, elongated limbs—floats in a pink sunset sky toward a castle, the quintessential fairy-tale ending. The scene embodies the ecstatic pinnacles of infatuation, the excitement of finding a connection with someone new. Gloomy Dinner, by contrast, evokes its disappointing lows, depicting a sullen Francis sitting alone at a table in a dark room, using a fork and knife to slice his phone in half. Despite its absurdity, this vignette captures the heartache that follows a dating app disaster or an embarrassing text—the feeling that it might be preferable to eat your phone than look at it again.

Other scenes capture the dynamics of seduction and objectification. In Red Light District, our skinny protagonist loiters by a brick wall with his pants down as a lecherous suitor—an actual dog, in business casual—lights a cigarette for him, dreamy red bokeh hexagons framing the scene. A reclining male figure drinking sloppily from a can dominates Crawling Over a Guy, his muscled, tan body evoking a landscape. Francis appears as an anthropomorphized spider crawling over his thigh, four eyes dreamily locked on the bulky crotch: the perfect representation of thirst.

While Ceccaldi’s paintings share the cartoonlike aesthetics of his comics and explore similar themes, they strip away the comics’ high drama and rapid-fire dialogue, relying on affect rather than words to offer a peek into Francis’s interior life. As a result, they capture a more complex range of emotions: deep longing, anxiety, and insecurity, but also bliss, desire, and curiosity. The scenes feel close to real contemporary experiences, even if they are represented in distinctly stylized, unreal form. Much like anime characters, Ceccaldi’s figures are relatable despite or because of their complicated and over-the-top qualities. Viewing his work is like looking in a mirror, and seeing someone flawed, sincere, and worthy of love.

Balenciaga Responds to Campaign Controversy, Photographer Details How It Has Rocked His Life

Samsung’s Epic Cyber Monday Sale Is Almost Over! There’s Still Time To Save on TVs & Appliances