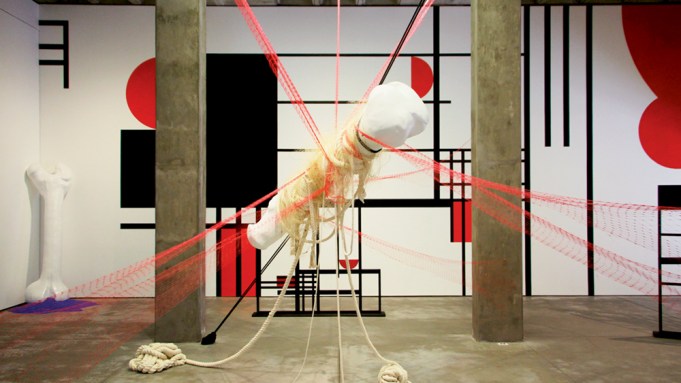 For “Ghost Nets,” Berlin-based Mexican artist Julieta Aranda transformed Galería OMR into a sort of De Stijl-inspired videogame landscape. Black, white, and red appeared throughout, as did networks of gridded lines: Mondrian-type patterns took the form of wall paintings, large freestanding sculptures, and a video projection on a floating screen, while a more standard grid design covered a wall-mounted textile, serving as the matrix for a crossword puzzle image. The videogame vibe was enhanced by massive sculptures of bones that leaned against walls, resting on colored sand piles, or that hung from the ceiling, entangled in red fishing nets. Nets are of course a flexible form of grids; the eponymous “ghost” variety are fishing nets that have been discarded or lost in the ocean, where they frequently continue to entrap animals. For Aranda, as she explained in an interview about the show, this issue points to broader problems concerning ecology, human responsibility, and the toxic structures we uphold.

Aranda is interested in biological systems of memory, such as bones (with their capacity to hold genetic information) and Arctic bacteria that have survived for hundreds of thousands of years and store valuable evolutionary data. She draws a parallel between these and crosswords, which she uses to visualize and organize concepts in her research, as repositories of life and knowledge. Her recent exhibitions at Der TANK in Basel and Francesco Pantaleone Arte Contemporanea in Palermo made use of similar ideas and motifs as those at OMR; the curatorial text for the first, for instance, claimed the show offered a glimpse into “the life of the many millions of tiny organisms that may have been frozen longer than humans have walked this planet.”

In Mexico, however, the notion of excavation inevitably evokes the bodies of thousands of missing people more than it does ancient bacteria. Since 2006, when ex-president Felipe Calderón started his guerra contra el narco (war on drugs)—which has been enthusiastically funded by the United States through the Mérida Initiative—more than thirty thousand people, largely civilians, have gone missing. By 2017, a reported 1,588 unmarked graves containing 2,674 bodies and 11,429 unidentified bones and bone fragments had been found, and these are most likely incomplete numbers, as the family members of the disappeared have argued. The war on drugs has done very little to curb trafficking and has instead viralized violence, with horrific acts committed with impunity by both state authorities and criminals.

Aranda’s show danced around ideas that were totally pertinent to the violent context in which it was situated, yet it refused to acknowledge that context directly. This seems like a glaring omission, if to some degree an understandable one: the market expects Mexican art to engage with the exoticism of bloodshed and corruption. The oversight does feel a bit callous, however, especially since the exhibition statement, written by curator and art historian Chus Martínez, waxes art-speak on the role that bones have on our “memory and mood” and on sand as a “storehouse of the million of creatures of the seas that existed in a different time” when there are thousands of humans from our own time already turning to dust not too far away from the gallery.

Rachel Dolezal OnlyFans Leak Reminds Everyone She Has an OnlyFans