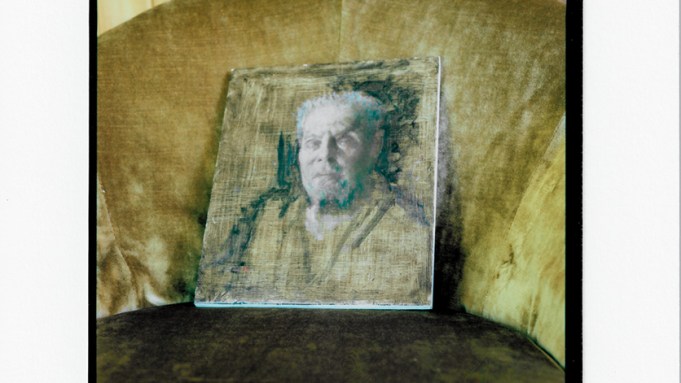 Justine Kurland’s monograph Highway Kind (2016) includes a short fictional piece by Lynne Tillman titled “Still Moving,” a collection of scenes that appear to be set in a single working-class town. Toward the beginning, one of Tillman’s characters finds herself struck with a moment of awe in an otherwise bleak world: “Estranged mountains bulged under the sky, the big sky, the endless sky. Anyway, no one could see an end to it, which reassured her, since so much seemed to be coming to an end. It felt that way.” This passage echoed in my head as I viewed “Airless Spaces,” an intimate presentation of Kurland’s new photographs alongside paintings by her late father, Bruce Kurland (1938–2013).

The former were a significant departure from the photographer’s characteristic work: lush, staged color pictures in which subjects such as runaway girls and all-female communes convey themes of escapism and fugitivity and the feeling that the photographer might herself have been engaged in a form of running, as she crisscrossed the country to pursue these projects for almost two decades. Having given up the road-trip lifestyle in 2015 so that her son could have a more stable life, Kurland seems to be confronting the question of where she has been running to or, perhaps, where she was running from.

Her new works, mostly in black-and-white, are the first for which she has focused explicitly on her own biography. For some, she returned to her hometown of Fulton, New York, which she left at age fifteen. Fulton was once a factory town for Nestlé, but the company shut down its operations there in 2003. One picture of the abandoned factory shows an ominous dark hole in a cinder-block wall in the foreground. Beside this image, offering a formal repetition, was a portrait of the photographer’s mother reclining nude on a bed with her legs spread. It is titled after Courbet: Origin, Mine.

Bruce Kurland was a reclusive naturalist, bird enthusiast, and still life painter who inhabited the edges of the art world and lived some two and a half hours away from Fulton while his daughter was growing up. This exhibition provided the photographer, who was not permitted into her father’s studio as a child, an opportunity to see many of the paintings in person for the first time. It is said that he sold every piece he ever made, and upon his passing there was just one unfinished, stern-faced self-portrait in his studio. His daughter’s picture of this work was the only color photograph in the show.

In his still lifes, Kurland engaged with the work of Dutch Golden Age painter Adriaen Coorte and the nineteenth-century American John F. Peto. He was, however, a “troubled Peto,” to borrow a phrase he used in the title of a 1990 painting of a vase of flowers not exhibited here. In this composition, as Carl Little wrote in the June 1991 issue of Art in America, Kurland “systematically ‘troubles’ his predecessor’s trompe l’oeil perfection with white flowers that appear to exude crude oil.” While his contemporaries were concerned with the “end” of painting, Kurland was preoccupied with the warning signs of a world in decline.

Signs of the twentieth century intrude in his paintings mostly in the form of detritus. The show featured, for instance, a 1973 painting in which a can of Budweiser serves as a pedestal for some stalks of asparagus. Frequently, Kurland depicted animal carcasses, such as the dead trout placed atop a wood block in a 2005 painting, or pieces of raw meat, as in a 2012 image of a package of fatty oxtail sitting out, waiting to spoil.

Justine Kurland’s complex constellations of domestic iconography similarly present moments that point beyond themselves. A snakeskin sits on a chair in the sun, the photographer’s menstrual blood runs down her leg, her cat stretches out post–spay surgery. The exhibition’s final photograph was of a newborn baby being held. Seen alongside the elder Kurland’s paintings conveying a sense of loss, such images point to the stakes of reproduction, to the weight of the world we inherit. But the photographs also portray a queer sexuality reveling in itself: capturing, for instance, the photographer having sex with her partner, or masturbating with her camera’s shutter-release cable in hand. While so much is coming to an end, this photographer, it seems, finds beauty in new origins all the same.

The 11 Best Ultra-Premium Chocolates to Buy Now, for Valentine’s Day and Beyond

‘Cunk on Earth’: A Hilarious Mockumentary From the Creator of ‘Black Mirror’