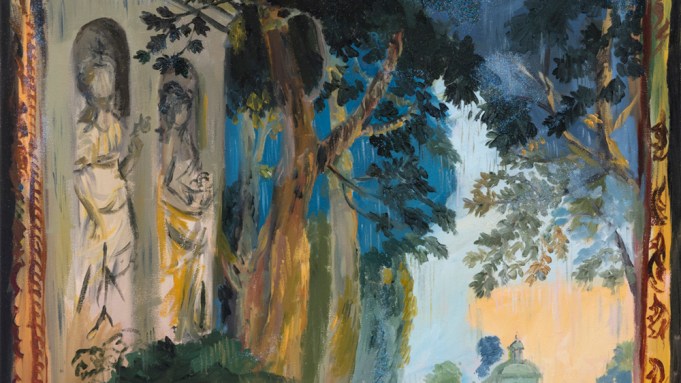 In the 1990s, Karen Kilimnik’s name was virtually synonymous with the slacker genre of “scatter art”: haphazard installations of stuff that, like three-dimensional mood boards, circled around a theme. One of her works, The Czars (1991), invoked the execution of the Romanovs through a blown-up black-and-white photograph of the trashed basement of Ipatiev House, a pile of fake snow, various strewn baubles, and a length of pink tulle. Another, Battles, or the Art of War (1991), brought together equestrian portraits, tree branches, military standards, a prop cannon, and bric-a-brac on a green rug to suggest a Napoleonic campaign. When her focus shifted to painting mid-decade, this slapdash quality persisted. Kilimnik is often described as painting like a teenage girl, an oblique way of saying that her work betrays a sincere enthusiasm for decoration and is not, technically speaking, very good. Flecked with glitter and ornamented with Swarovski crystals and stickers, her paintings—dreamy depictions of horses, European palaces, lush gardens, ballerinas, witches, and fashion models—are characterized by loose, undifferentiated brushwork, muddled color, asymmetry, and clumsily outlined forms.

Kilimnik’s ineptitude as a painter hardly matters, because she never really stopped making installations: in her exhibitions, she subordinates each painting to the ensemble, typically with weird and dazzling results. Kilimnik’s most recent exhibition at 303 included roughly seventy works from 2000 to the present, a not-insignificant number of which were also in her last show at the gallery, in 2016. But even the new works elicited a sense of déjà vu. Six of the seven paintings dated 2019 were in fact printed canvas-based reproductions of her previous paintings, now embellished with rhinestones and crystals.

Small paintings, ornately framed collages, and photographs were hung salon-style—excuse me, in the “Petersburger style,” per the press release—in associative groupings accompanied by extravagant placards tied to gilt hooks with satin bows. The first group evoked the English pastoral, with a portrait of a stately hunting dog done in the manner of George Stubbs (the well-groomed worrywart out hunting, 2019) inserted into an array of photographs of cows, sheep, and big, blooming roses in the Cotswolds, and xeroxes of television and movie stills showing scenes of baronial camp. Another group, a cluster of eighteen paintings arranged in a loose pyramid formation, took up the diaphanous classicism of the French Rococo: pastel chateaux under bright blue skies, a pair of seashell tondi, the gilt insignia of the Roman god Mars looming over a landscape, as if it had flown right off the walls at Versailles. The goddesses Artemis & Ceres return to their niches to sleep after a hard day’s work (2016) imagines a pleasure garden at dusk, a sprinkle of diamond dust reinforcing the mystical animacy ascribed to the sketched forms of two goddess statues.

It would be easy to dismiss Kilimnik as a twenty-first-century pompier playing escapist dress-up. But one set of works disturbed the atmosphere of light fantasy. A video titled The World at War (2018), a supercut of scenes from World War II films featuring troops singing patriotic anthems, played on a monitor that hung in an ostentatious gilt frame, flanked by paintings of chinoiserie tapestries and patterned porcelain. Leveling the distinction between military pomp and elegant ornament, the juxtaposition makes clear that Kilimnik understands the coercive force of the decorative: its ability to paper over social fissures, naturalize hierarchy, and recast the filthy misery of the trenches into a righteous cause.