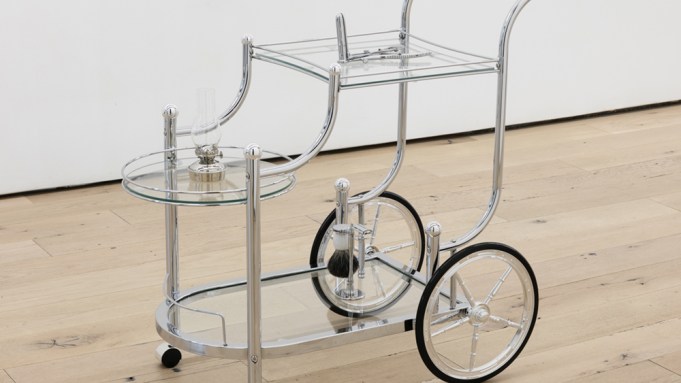 Kayode Ojo’s sculptures feature glimmering objects placed atop mirrored or chrome pedestals, like jewelry at Barney’s. When I first saw these prismatic displays on Instagram, I suspected they were perhaps too beautiful, their seductive techniques rendering any potential critique of the market moot. The materials, however, are not as expensive as they may sometimes appear. Ojo shops for them online and like the consumer population at large—whose class anxiety drives the market for fast fashion and affordable home design—seeks out inexpensive things that look high-end. One work features what the checklist calls a “Mirrored Pyramid Living Room Accent Side/End Table.” I found it on sale on Target.com for $44.99.

Haim Steinbach said in a 1986 roundtable organized by Flash Art that the artist-shopper must take on, simultaneously, the perspective of the general consumer to whom the commodity is marketed and that of the more detached critic. In performing a kind of drag version of the aspirational middle-class consumer, Ojo adopts the behaviors of a demographic that many in the art world might look down on. And yet, when his components are assembled into works displayed in a gallery (and shown in photographs online), they are alchemically transformed into more convincingly luxe objects. While the effect is ironic, it’s not the deadpan irony of earlier generations—I think of John Armleder’s Furniture Sculpture 185 with Stéphane Armleder (1988), a Brooks Brothers–style dressing room complete with two hanging suits plopped in the gallery—but is rather a subtler play on the double standards of the art world, where artists often use plain, rugged materials to produce expensive objects that don’t look too expensive.

The exhibition also included a series of self-portraits Ojo shot with an automatic Yashica T4, which was popular among fashion photographers in the 1990s and early 2000s. In one image he is shown partly covering his bare chest and donning a chic black bob, a chunky costume jewelry necklace, and a Plus Slinky Plunge Split Maxi Dress, bought on Boohoo.com for $50. The title of another self-portrait—a close-up in which he’s demurely covering his face—suggests that he’s located in a Paris hotel room and that the silver bracelet on his wrist is Cartier. The Cartier one costs around $4,500, but—following the checklist’s wording for a sculpture that includes a similar bracelet—I found a stainless-steel counterfeit on eBay for $14. Closed Audition: Balenciaga Bootcut (2018), another self-portrait, was commissioned for Balenciaga’s Instagram. The titular jeans look grungier than anything else in the show. The artist’s styling throughout the self-portraits might take up drag aesthetics, but drag tends to peddle an illusion of upward mobility, creating moments of glamour despite real financial constraints. Ojo’s images contend with a class dynamic of the opposite kind, in which the luxury industry adopts signifiers of lifestyles of people who couldn’t actually afford the goods at hand.

This strategy isn’t so different from modernist artists’ appropriation of “primitive” forms, through which they hoped to recuperate a sense of artists’ shamanic importance to society at a moment when their role seemed increasingly trivialized by the market. At the center of the gallery, Ojo projected A Very Unusual but Very Elegant Gesture, a short video, pulled from Instagram, of a Belgian art dealer making a sales pitch for a Nigerian divination bowl. In the suited European’s hands, the fetish object speaks to a complex system of ritual and symbolic exchange as it is transformed into a commodity—a fetish of a distinctly different but no less magical kind.