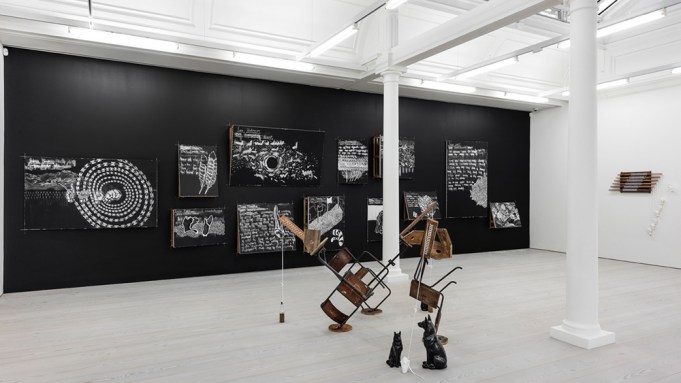 Kemang Wa Lehulere tends to use a limited set of objects in his sculptures, repeating and recombining the same types of found or modified elements across different works. The displays that result read rather like stage sets (Wa Lehulere indeed also works in performance), the array of proplike items signifying various themes to do with South African history, memory, and identity. Whether or not you find this approach effective depends on your tolerance for his tone of oblique, occasionally slightly clunking, symbolism.

The thirteen sculptures that comprised the majority of “not even the departed stay grounded,” his debut exhibition with Marian Goodman Gallery, featured several repeated elements. Most prominent were the examples of what has essentially become his signature material: old, scratched-up wooden school desks, which he deconstructs to varying degrees or refashions into other forms—though the core metaphor is always about education and instruction. Then there were the mass-produced porcelain statues of Alsatian dogs, another perennial motif, which inevitably brought to mind the oppressive tactics carried out by South African police under apartheid. Resin molds of hands were dotted about—specifically, the hands, according to exhibition literature, of Wa Lehulere’s aunt, who was involved in the Soweto student uprising of 1976, though what the hands’ sign-language gestures (usually representing vowels or letters, a gallery attendant informed me) were meant to communicate was never explained. This sense of frustrated communication extended to the numerous messages-in-bottles that were incorporated into the sculptures, as the scraps of paper inside them couldn’t actually be read. Long white shoelaces tying components together or creating elaborate suspended arrangements served as the sculptures’ final recurring component.

The various combinations of these elements seemed to express some basic sense of conflict or contradiction, especially regarding education—whether it is a tool for control and repression or something potentially more liberating. In some pieces, desks were stacked lengthwise like columns of prison cells, or sawed into shapes suggestive of other types of cages, such as birdhouses. Elsewhere, they were turned into winglike structures. Race was clearly a touchstone throughout—the dogs were black, the resin hands white, the sand weighing down the bottles a mixture of black and white. (Wa Lehulere, who was born in 1984 of what was then an illegal relationship in South Africa, is mixed-race.) Other references were explicitly outlined in the press material: the music coming from desk-installed speakers in one work stemmed from a coming-of-age ceremony carried out by the Xhosa people, for example; and star shapes formed by knotted lace ends or metal desk struts referred to the Dogon people’s astrological knowledge, specifically their discovery, well in advance of Western science, of moons orbiting Sirius, the Dog Star. So that was another possible allusion the porcelain dogs were intended to make.

Still, that specific meanings had to be explained this way was something of a disappointment. Too often, the highly codified, allegorical nature of Wa Lehulere’s displays seemed to produce a feeling of sterility, of barrenness. Much of the problem, perhaps, was that the exhibition derived partly from a previous performance piece, which won Wa Lehulere the main award at Performa 17 in New York last year, but whose significance remained obscure here. Many of the chalkboard-style structures that jutted from the gallery walls—featuring drawings of hands and boots and canine heads, and scrawls of racist tirades and apartheid slogans—were titled with scene numbers, but what the performance’s actual scenes entailed was not illuminated. Even apart from the lack of such connections, however, it was hard to shake the sense of the sculptural works missing something—you wanted them to be less neatly determined, more engaging on a physical level, rather than merely serving as conduits for extraneous interpretation.

After Months of High Prices, the Cost of Chicken Is Finally on the Decline

Inside ICNCLST, the Creative Agency Behind the Most Exciting Artist-brand Collaborations

USA vs. Iran Live Stream: How to Watch The World Cup Game Online for Free

A Subtle Style Upgrade to an Everyday Jacket, Shearling Coats Are Our Go-To Every Winter