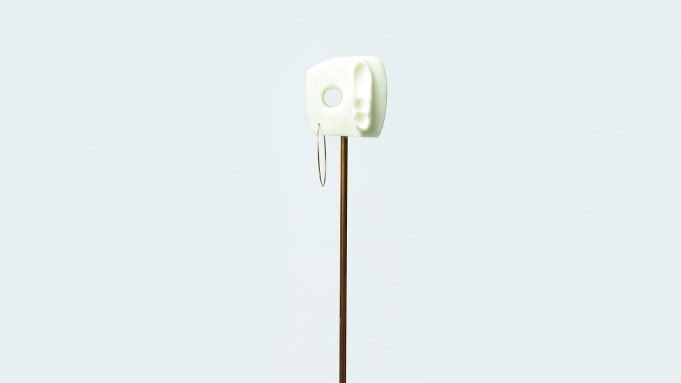 In the mid-2000s, Kevin Francis Gray began sculpting cloaked or hooded figures in marble and bronze, their faces hidden by draped cloth. More recent works have featured faces distorted by pockmarks, the marble resembling a dimpled pillow. In Gray’s latest series, “Breakdown Works” (2020), which make up the bulk of his exhibition at Pace, the faces are even more obscured: he has gouged so deeply into the marble that it is unclear, in many instances, if you’re even looking at a head.

It is a flat-out challenge to find a face in Breakdown Work #6, though its form—an oblong piece of Carrara marble mounted on a bronze pole—implies one. A hefty single hole is punched out of the marble, slightly off-center, while a golden hoop earring pierces the lower-left corner. On the right is a wormlike growth, with three trough-like indentations. This protrusion, which looks more stuck on than carved out, could be a nose, or an ear—even though the earring is on the opposite side of the “face.” Breakdown Work #7, carved from deep dirty-green marble that gradates to memory-foam yellow, and set atop a vertical steel beam, recalls the heads of the Moai monoliths on Easter Island, but with holes and scooped-out hollows. As I walked around it, the sculpture’s facial expression seemed to shift from sternness to snarling disappointment to surprise.

The “Breakdown Works” are erected on plinths made of materials including concrete, salvaged wood, and corten steel; the tallest works stand more than seven feet, so the heads loom over the viewer, staring down from above. Many of the sculptures seem weathered by age, in both attitude and form. Breakdown Work #21 looks as if the Classical bust of a wizened elder had been left outside, his identifying features scoured off with time as the small crevices in the stone turned to caverns, and sharp edges to gentle curves. In fact, the marble Gray employs has often been sitting out in the elements—some of the original blocks were found abandoned in a marble yard, covered with ivy—but the heads themselves also seem tired, peering down from on high at the foibles of the viewers below.

The show also includes a pair of sculptures from Gray’s “Young Gods” series (2019–ongoing), comprising freestanding male figures in marble. In contrast to the stiff bearing of the “Breakdown Works,” these pieces have a sense of motion about them—in their stance, but also their surfaces, which are rippled like the waves of an angry sea. The left foot of Striding Youth pushes off its base as daintily as a dressage horse; Sun Worshipper Standing is stationary, but seemingly not for long when viewed from the back, one of his buttocks is markedly raised. The two “Young Gods” seem impatient with the “Breakdown Works” surrounding them, the “Breakdown Works” irritated by the “Young Gods” wanting to get going.

This article appears under the title “Kevin Francis Gray” in the March/April 2021 issue, p. 76.

Selfridges Says It’s the Summer of Sex and Sleep

RS Recommends: These Are the Best Fourth of July Sales Worth Shopping Today [Updating]