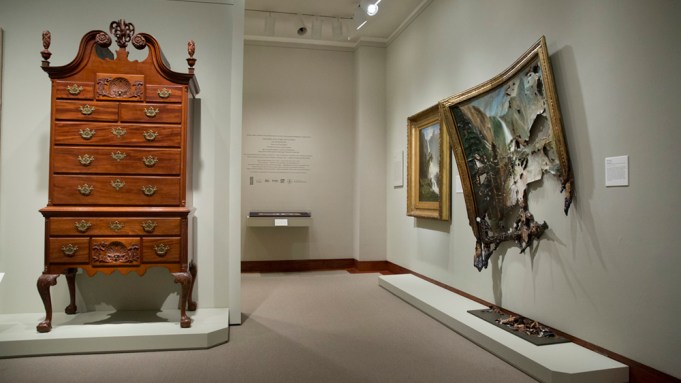 In 1871, Thomas Moran joined the Hayden Geological Survey, organized by the Department of the Interior, to locate the sources of the Missouri and Yellowstone Rivers and to better understand the region’s geothermal activity. In Moran’s painting The Grand Canyon of the Yellowstone (1872), based on the sketches he made on the expedition, the Yellowstone River follows the gentle curve of the canyon. Pristine and essential, the image has become an archetype for our most idyllic perceptions of nature. This effect is enhanced by the painting’s suggestion that the area is uninhabited. But Crow, Shoshone, and Nez Perce Indians had used the land, and were forced onto reservations when the Yellowstone National Park was established, a year after the Hayden Expedition.

Lower Falls, Yellowstone Park, a painting of the same scene that Moran completed during a return visit in 1893, is included in “Nature’s Nation: American Art and Environment,” an exhibition that closed last week at the Princeton University Museum of Art and travels this year to the Peabody Essex Museum in Salem, Massachusetts, and Crystal Bridges Museum of American Art in Bentonville, Arkansas. Moran’s painting hung beside the introductory panel at the show’s entrance, where its magnificence and complexity resonated against an Indigenous land acknowledgement on the opposite wall, honoring the “ancient homeland and traditional territory” of the Lenape. The painting and the land acknowledgement represented a tension explored further in the exhibition: a tension between a capitalist worldview in which land appears as a providential means to a prosperous life and a more egalitarian understanding of our relationship with the land as interdependent. Curated by Karl E. Kusserow of Princeton and Alan C. Braddock of the College of William and Mary, “Nature’s Nation” chronicles the formation of ecological consciousness within American art through the lens of ecocriticism.

Prompted in part by books like Rachel Carson’s Silent Spring, Edward Abbey’s Desert Solitaire, and Marjory Stoneman Douglas’s The Everglades: River of Grass, ecocriticism evolved in the 1980s and 1990s as an interdisciplinary method for understanding connections between literature and the natural world. Its early practitioners examined representations of the natural world and significant environmental changes. As Greg Gerrard writes in his book Ecocriticsm (2004), a second wave of ecocriticism collapsed the distinction “between the human and the nonhuman, questioning these very concepts, and asking how works might frame the environmental crisis and its solution.” “Nature’s Nation” was structured in parallel with this progression, considering how artists of the Romantic era expressed the environmental perspectives and effects of colonization and later, settlement and Civil War, while more recent works center organic forms and the tragic outcomes of imperialism.

More than 110 works—paintings, sculpture, sketches and renderings, decorative objects, and photographs—were grouped in three “epochs”: Colonization and Empire, Industrialization and Conservation, and Ecology and Environmentalism. After the introductory gallery, which combined early and contemporary work, the exhibition was organized chronologically, with a few anachronistic interventions. These insertions were strategic. They posed moral and ethical questions that leave the viewer feeling troubled by the irreversible effects of occupation, pollution, and the exploitation and degradation of human beings involved in building a capitalist society. Ecocritical interpretations were presented in extended wall labels—such as an explanation that a cholera outbreak prompted the bourgeois gathering of artists and writers under a tent on the New Jersey shore depicted in Robert Walter Weir’s 1833 oil painting The Greenwich Boat Club—making the exhibition a literary experience as well as a visual one.

An arresting series of juxtapositions articulated the ecocritical frame in the introductory gallery. Albert Bierstadt’s Bridal Veils Falls, Yosemite (ca. 1871–73), portraying a misty waterfall tucked into an idyllic green valley, hung beside Valerie Hegarty’s Fallen Bierstadt (2007), a copy of the former work on a canvas marred by tears and holes, as if burnt or corroded. Its missing pieces lay piled on the floor below it and the bottom of the sculptural frame appeared to have been burnt or torn away. Adjacent to Hegarty’s painting was Jaune Quick-to-See Smith’s mixed media assemblage The Browning of America (2000). Orange paint drips vertically over and beyond the borders of a contemporary map of the United States marked with images of ancient petroglyphs. Smith’s portrayal reasserts the presence of Indigenous populations while suggesting the insidious influence of petrochemicals on the natural environment. Both Hegarty and Smith’s work challenge Bierstadt’s portrayal of nature as immutable and enduring.

In the Colonization and Empire section, Thomas Cole’s painting Home in Woods (1847) depicts a log cabin nestled in a clearing between an evergreen forest and a slack, glistening lake. A white family has settled in the cabin, and a young boy carries a fishing rod and fish toward his mother, who waves to him from the open cabin door. Interpretative text suggests that while Cole might have felt ambivalent about westward expansion, he nonetheless romanticizes a process of settlement that involved the extermination and exile of millions of Native Americans. Positioned a few inches away, in a glass display case, was Mohawk artist Alan Michelson‘s Home in the Wilderness (2012), a scale model of the log cabin in Cole’s painting constructed from scrolls of paper printed with the Treaty of Fort Wayne, which seized three million acres of land from Native Americans in Indiana in 1809.

Olmsted and Vaux’s pen-and-ink Greensward Plan for Central Park, and Jervis McEntee’s oil painting View of Central Park (both 1858) appeared in the Industrialization and Conservation section, where they were presented as efforts to parse and manage the natural world. Other works reckon with the environmental ravages of the Civil War, particularly Mathew Brady’s Wounded Trees at Gettysburg (1861). In Winslow Homer’s A Huntsman and His Dogs (1891), a hunter carries a slain stag over his shoulder; the sky hangs gray in the background, and tree stumps in the foreground indicate the clear-cutting of forests to make way for settlement. At the end of this section, a trio of representations of animals by three generations of Wyeths encapsulated the narrative of “Nature’s Nation.” In N.C. Wyeth’s Roping Horses in the Corral (1904), the subtext is an archetypal standoff between man and creature. The horses are indistinct from each another, wild and unsteady. Andrew Wyeth portrays a content pet dog on its belly in a bed of tall grass in My Hound (1962), while the wide eyes, still body, and softly detailed wool coat of a ewe in Jamie Wyeth’s Portrait of Lady, Study #1 (1968) seem to suggest that the animal possesses interiority and subjectivity.

In the final section, bold, organic forms further emphasized the thriving and decay of the natural world, regardless of drawn borders. Ansel Adams’s gelatin silver print Monolith, The Face of Half Dome (1927) presents the peak of a massive mountain in shadow while its base is sunlit. In Georgia O’Keeffe’s 1929 oil painting The Lawrence Tree (1929), the spiraling brown branches of a ponderosa pine might be confused with its roots as they stretch into a starry night sky. Both of these works suggest, in their grand scale yet simple form, the inherent mystery and intangibility of nature. While these works induce the kind of meditative calm one feels when walking in nature, others in the section—such as Dorothea Lange’s Dust Bowl portraits and Alexandre Hogue’s painting Crucified Land (1939), in which a cross stands among parched, plowed furrows—lament the effects of overharvesting and monoculture. Alexis Rockman’s painting Aviary (1992) depicts a haunting, futuristic tree with scant foliage and metal tubes dripping sludge. Birds of extinct, endangered, and fantastical species perch in its branches. The closing image, Edward Burtynsky’s chromogenic print Oil Spill #10, Oil Slick, Gulf of Mexico, June 24, 2010 (2010), shows oil from the Deepwater Horizon spill submerged, an intangible fissure that sprawls and drifts toward a blurry horizon.

The exhibition cumulatively suggested that renderings of pivotal historic moments and awe-inspiring studies in color and light presage moral and ethical concerns about our relationship with land. The ecocritical gaze, as presented in the curatorial notes, drew the eye from what is already known about many American masterworks toward latent environmental aspects that have not been explicitly addressed previously, telling a different story about American art.