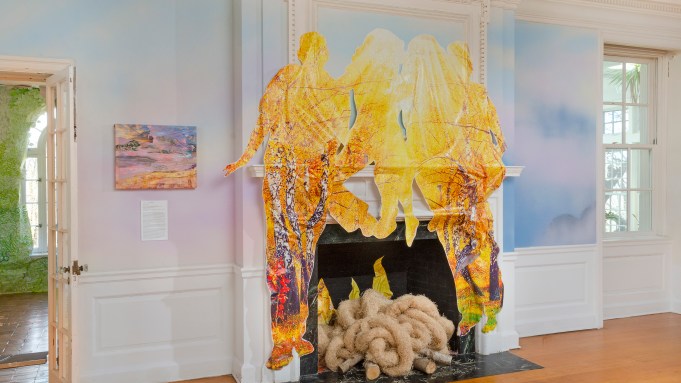 In the nineteenth century, Wave Hill, a twenty-eight–acre estate situated on the bank of the Hudson River in the North Bronx, was home to publishing scion William Henry Appleton, admirer of the famed natural scientists he often invited as guests. Wave Hill was gifted to New York City in 1965 and turned into a public garden, but an aura of affluence still surrounds its grounds, which you reach by taking a shuttle from the last stop on the 1 train past the mansions of Riverdale. Inside the gates there is a mix of well-manicured herb and flower gardens and greenhouses stocked with succulents; beyond that, you’ll find more overgrown woodland areas, winding paths, and grassy nooks for sitting (but not picnicking). This historic estate with a botanic garden is perhaps not a place one expects to view contemporary art addressing the geographies of American empire, but that is what is currently on view at Glyndor Gallery, Wave Hill’s venue for cultural programming. The exhibition “Here We Land,” on view through July 14, takes up three rooms, each one with an installation offering a small portal to three distinct but interconnected colonial spaces that are violently affixed to the United States. In works commissioned for the show, Camille Hoffman, Sara Jimenez, and Maria Hupfield invoke in turn the US-Mexico border, the Philippines, and Indigenous territories of the Anishinaabe, while also incorporating in some way aspects of the land of Wave Hill itself. There are separate entrances to each room, and no directions given for how to move between them. Like the gardens, the gallery is not organized in a linear fashion, prompting visitors to wander through while making associative connections between histories and places.

Hoffman uses the root systems of the North American aspen tree as a metaphor for the separation of families at the southern border. It is perhaps a misnomer to use the singular in saying “tree,” as such individuality is not natural to the aspen. In Utah’s Fishlake Forest lives Pando, the world’s largest organism. It appears to be 47,000 individual aspen trees, but each one is a genetically identical clone sprouted from a single root system that extends for miles.

Hoffman’s Las Americas (en el hogar)/ Americas (in the hearth) is a set of photographic prints of aspen trees on vinyl. Vibrant like stock photos, the prints have been cut into silhouettes taken from images of families held in detention or crossing the US-Mexico border, as well as from snapshots of the artist’s own family. Hoffman brings the boundary-busting ways of the aspen into the carefully proportioned and ornamented interior of the Glyndor house: these families spill over the moldings, out of the window frames, and across the fireplace. In the defunct fireplace, the artist has stuffed both aspen logs and thick noodle-like bundles of root material, making the hearth the center from which these diffuse family collectives grow. Outside the windows of this house that nobody lives in, grow trees with yellow leaves that echo the ones in Hoffman’s piece. The installation finds the openings where the boundary between inside and outside breaks down, marking in its crossings the exclusions enforced by such borders.

Jimenez’s The Edge of Dwelling, which fills Glyndor’s central room from floor to ceiling, is a black-and-white papier mâché cityscape created from colonial documents produced by Americans in the Philippines. A seeming extension of the artist’s “Maladies” series (2017–18) of large-scale installations made of printed images from nineteenth- and twentieth-century texts about the Philippines, The Edge of Dwelling likewise uses collaged materials to represent the architecture of foreign occupation. Buildings fold on themselves and large paper structures jut out or hang down, forcing the visitor to make tight and controlled movements to navigate the space. A soundscape created in collaboration with composer Lau Nau, made of field recordings from the Wave Hill grounds and waterways nearby, is at times murmuring and subtle, at others unshakably raspy, like a ghost’s whisper. The imagined city is fractured and disoriented; Jimenez’s installation divides the space into shadowy passages, her papier mâché architecture obscuring most of the room’s windows.

Jimenez’s work occupies the middle room, connected on both ends by doorways to the others. No matter which door I used to exit, the next room would have felt like a clearing: open space struck with sun. This sense was amplified when entering Hupfield’s installation, because the first thing I saw was a set of antlers. Her sculpture All Our Relations in 4 Directions is a burst of color from the corner of the room, with antlers painted a bright, almost neon shade of orange attached to a standing speaker (silent when I visited). Hupfield, an Anishinaabek citizen of Wasauksing First Nation in Canada, often calls her works “body-objects,” sculptures that are activated in performance. Many of the pieces in the show incorporate industrial felt, a gray fuzzy material that contrasts in color but matches in mood the safety-bright colors of fluorescent orange and green that appear in painted geometric shapes across the installation. Together these materials evoke a construction site. A built-in cabinet hosts Stones in the Sky, a collection of soft moon rocks stitched from gray felt with pink, blue, and orange threads. The use of industrial synthetic material for traditional forms and the invocation of lunar landscapes harken to the aesthetics of Indigenous Futurism. In this regard, Hupfield’s work is aligned with the practices of Jeffrey Gibson and Natalie Bell, Indigenous artists who also use found or mass-produced materials in pieces that employ traditional methods and craft. Such work prompts an understanding of technology not as an applied science of extraction and profit but rather as means of orientation to the range of worldly, even cosmic relations that extend every which way. Technology does not have to move at the speed of a spaceship; it can also reside in the recalibration of a creation story, of a model of the world told through objects and song. These forms of technology that Hupfield creates and remixes are objects for cultivating what she calls our “radical relations,” interconnections and complicities that have to be fostered across the unnatural borders that separate people and places.

On either side of the room stand two wooden chairs, one under a window beside All Our Relations in 4 Directions and the other by the doorway. These are part of a social sculpture In Land, In Landing that uses chairs taken from the grounds outside, painted with a four-direction symbol that might first be mistaken for crosses. Their intended purpose seems to be neglected in this new location; all the visitors I saw followed the assumed rule that sitting on the art is not allowed. I, for one, read the wall text, learned the chairs were for sitting, and felt a bit sheepish placing my backpack, stuffed with snacks, against the white wall behind the chair. I looked to the side and hoped I didn’t make eye contact with the person sitting at the information desk just beyond the door. Perhaps this discomfort is the point. There is a bashfulness in taking that first dip into the difficult task of situating the self, whatever this flimsy concept of “self” still persists, unshakeable as a shadow. A radical relation to place begins at the uncomfortable scale of our body, disciplined as it is to move through a gallery without inhabiting its discomforts. Sitting in the chair, I faced the felt and photo collage Truth Comes in its Own Time I that seemed to make reference to the inescapable containers of our body and the world it moves through: a pair of photos of two people embracing in a fountain are cut through with swaths of felt obscuring the scene. Outside the window I could see the greenery of Wave Hill and the famed view of the Jersey Palisades across the water.

“Palisades” did not in its first use describe a natural formation but a military one, a fence of wooden stakes. How telling that the settlers of this area looked to these ancient basalt formations and thought of armed borders, choosing the name Palisades for what had been described by the Lenape as treelike rocks. The artists of “Here We Land” depict what landings across the Americas have done to the landscape. Through various means, their installations work through the disorientation of dispossession and ask us what fictions, images, and imaginary rules make such inhospitality possible.