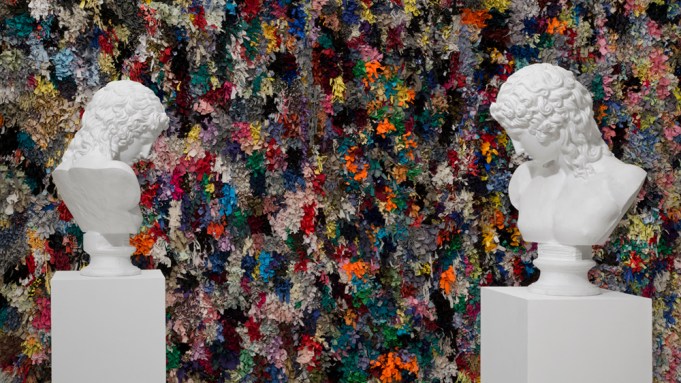 Over the past decade, socioeconomic crisis has circulated through the world like a destructive blood clot. In each place it lands, its damage is visible in everyday life: closed shops, shuttered factories, foreclosed homes. The Cranbrook Art Museum’s “Landlord Colors: On Art, Economy, and Materiality” explores how such crises affect artists and the materials they use. Organized by senior curator Laura Mott, the exhibition features work by artists from five particular environments: Detroit since the 1967 rebellion, South Korea and Italy in the postwar era, Cuba following the demise of the Soviet Union, and Greece after the 2008 financial collapse. The title borrows a term that John Baldessari coined to distinguish the cheap paints landlords use from the vibrant hues made for artists. One of the curatorial premises is that when artists don’t have the means for proper supplies, they turn to other materials and thus inscribe economic history into their art.

A massive wall-mounted carpet by Cuban artist Reynier Leyva Novo confronts visitors as they enter the museum’s main gallery. Speaking to the current crisis of mass migration and notions of hospitality and home, the piece comprises strips of fabric cut from clothes that Cuban immigrants had worn when immigrating to the United States. The multicolored rug acts as backdrop for Giulio Paolini’s 1984 sculpture L’altra figura (The Other Figure), which consists of two white plaster busts looking down at the remains of a smashed third, the scene suggesting the Italy of antiquity peering at a country fractured by the corruption, economic unrest, and political terrorism of the 1970s and ’80s. While Paolini used regular plaster to mimic marble, Greek artist Andreas Lolis carefully carved marble to replicate discarded packing foam and fragments of wooden pallets—detritus commonly found in the streets and refugee camps of today’s Greece.

In Korean artist Ha Chong-Hyun’s Conjunction 79-9 (1979), a band of ocher oil paint runs along the bottom of a large rectangle of burlap stretched on a wooden frame. Chong-Hyun was a member of the Dansaekhwa movement, which emerged in South Korea in the 1970s, when the country was under a military dictatorship. “Dansaekhwa” means monochrome, and the group focused on making minimalist compositions from simple, inexpensive materials. Chong-Hyun scavenged the burlap for his paintings from bags in which the United States government sent relief goods to South Korea during the Korean War. Detroit-based artist Addie Langford’s painting Verso Phthalo Series: BR Blue/#1/LU (2018)—which features rows of drippy, blue rectangular daubs—was inspired by Dansaekhwa, but it also evokes Detroit’s auto industry. For her canvas, she employed a fabric composed of rubber, cloth, and leather that is used in car interiors.

The crises the show examines feel distant in both time and space on Cranbrook’s arcadian campus, which is located in an affluent suburb of Detroit. A series of site-specific installations and performances that Mott curated in collaboration with Taylor Renee Aldridge and Ryan Myers-Johnson helps connect the exhibition to Detroit, where rows of abandoned buildings and empty lots provide stark evidence of economic decline. For one of the pieces, artist and poet Billy Mark installed three flagpoles on a vacant lot in his neighborhood. A black hoodie with twenty-five-foot-long sleeves dangled from the center pole. Every day for a month this summer, Mark or one of his neighbors hoisted the hoodie’s sleeves up the flagpole at sunrise and lowered them at sunset. Visitors were invited to don the hoodie and feel their arms suddenly held aloft. Given the chosen garment and the gesture of upraised hands, the work evoked the unceasing incidents of young black men shot and killed by white police officers. It also brought to mind brutal images from a foundational American economy—the enslavement of African peoples—and reminded viewers that in this country it is impossible to disentangle economics and race.

“Landlord Colors” is an incisive presentation of cultural history, ambitious in both its breadth and its commitment to detail. The sheer scope of the exhibition, however, tends to overwhelm. The show demands close attention, and viewers must lean heavily on wall texts and labels for context. Still, it is better to ask more of viewers than less. The works express the visions of individual artists but also the material conditions of specific historical moments and geographic locations. Contemporary art is so often divorced from such origins. “Landlord Colors” tries to repair this disconnect: to put art back in its place, so to speak.

This article appears under the title “Landlord Colors” in the October 2019 issue, p. 91.

Shay Mitchell Talks Diamonds, Drama and Big Trouble From a Little Blue Box in Rom-com ‘Something From Tiffany’s’