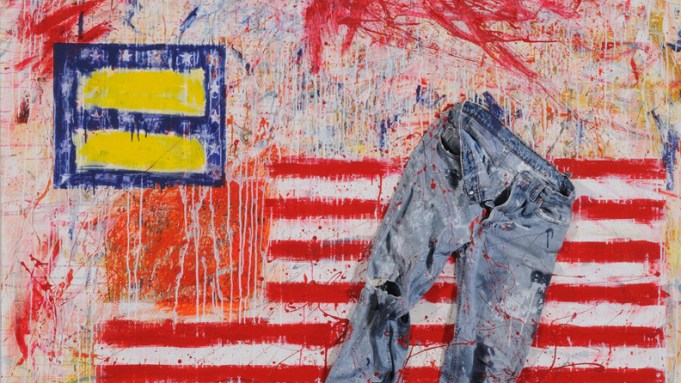 Atlanta-based painter Nabil Mousa’s “American Landscape” series (2008­–12) trades in readily identifiable symbols: the American flag, the gendered iconography of restroom signs, and the Human Rights Campaign’s logo of a yellow equals sign on a blue background. Only a painter as gifted as Mousa could make such generic source material feel personal. It’s a testament to his talent that the works in the series, including nine that on view at the Arab American National Museum through April 8, manage to resonate for both artist and viewer.

Mousa emigrated with his family from Syria in 1978, when he was a boy, and “American Landscape” represents a continuation of his own struggle with questions about American identity, sexuality, and patriotism. Accessing universal themes through personal stories is a common and powerful artistic device, but it is more challenging to craft personal narratives from universal imagery. The symbols are omnipresent but individual associations with them are subjective. While many people respond with conditioned patriotism to the sight of the American flag, denizens of the art world tend to style themselves as resistant to blind nationalism. Though it is easy to imagine people who struggle with the gender binary to feel alienated by the limited imagination of restroom symbols, it is difficult to imagine anyone strongly identifying with them. But these are the figures that populate Mousa’s landscapes, many of which take altered American flags as background imagery. Neutral icons with only the minimal indication of gender as stand-ins for his particular experience of homosexual relationships, life in the United States, and his connection to Christian values. (Like many Middle Easterners who arrived in the 1970s, Mousa’s family is Christian.)

“Being an American means being part of a big and diversified community,” said Mousa, in a video walk-through of “American Landscape.” Like all the figurative aspects of the “American Landscape” series, this diversity is represented in the bluntest terms: figures rendered in black and white, as with American Landscape #34 (2009), which features four female icons holding hands, atop a mixed-media landscape of rubble. Some of the canvases have fiber elements, including a whole pair of jeans embedded in American Landscape #20 (2009), and an actual American flag chopped into pieces and placed around the surface of American Landscape #19 (2009).  There is a chaos of layers, textures, and colors beneath the placid iconography, perhaps suggesting that these identities struggle to find ground against a prevailing landscape of mass media messages.  Red, white, and blue are complicated by various shades of orange. The stripes of the flags smudge and drip. Several bars in the center of American Landscape #45 (2012) are hashed with tick marks; given the focus on identities at risk, one wonders what tally these marks are keeping.

American Landscape #31 (Unborn Child), 2009, features a host of multimedia elements, both abstract accumulations of detritus and textual elements in the form of newspaper clippings, flyers, and wheat-pasted slogans. end the harm . . . , demands a bumper sticker plastered across the top righthand corner of the canvas, and the statement continues in blocks of text, collaged like a ransom note:…from religion-based bigotry and prejudice. In the foreground, a pregnant mother and child rise in red, flamelike curls. The smaller figure attends to the pregnant belly of the mother, where the fetus is represented as a black circle. They are neither icons nor detailed renderings; rather, they form a potent collision of generic symbols with Mousa’s personal interpretative gestures.

Energy radiates from Mousa’s intense brushwork and smeary washes, barely contained by the visual consistency, strict palette, and limited symbol set. The narrow gallery feels like a chapel, with the small to mid-size canvasses lining the side walls and the expansive American Landscape #1 (2009)—a 12-foot-wide American flag where HRC logos replace the stars and schematic men hold hands along the stripes—as the altarpiece. Only one piece here breaks the stars-and-stripes motif—American Landscape #22 (2009), which harks back to Mousa’s earlier practice of replicating traditional Middle Eastern decorative floral motifs. His older works were executed at a small scale, with a tightly controlled hand. But here Mousa has taken a motif of swirls and flowers, as might be seen in a tile mosaic, blown it up large, and painted it with the loose, frenetic style of the other landscapes. Across the bottom of the canvas extends a row of five male icons holding hands, rendered in rich orange. Just above and beginning to encroach on their heads is an opaque pour of thick brown paint, obscuring all the background motif but a flash of red-orange on the far right of the canvas. As with all of the works in “American Landscapes,” though the figures represent something personal to the artist, the generic blankness of the imagery returns the narrative to the realm of the universal. The figures could be any of us, and the mounting threat to our visibility and solidarity could be anything.