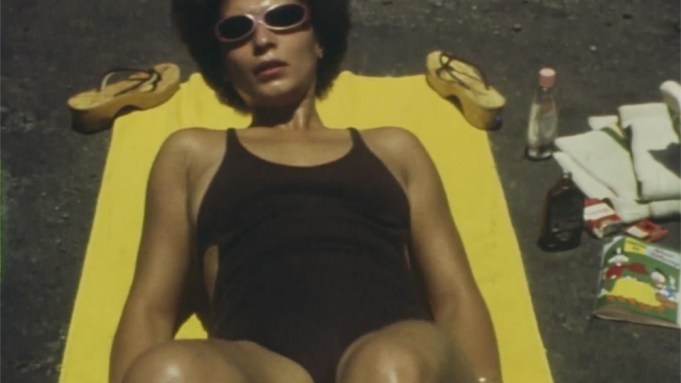 This exhibition started with curator Regina Tattersfield’s realization that the available material on art made in Mexico using Super 8 film all but excluded women artists. This prompted her to travel with a moviola—a device that allows one to watch 8mm films without projecting them, reducing the risk of damaging them—digging up cartridges from libraries, archives, and artists’ personal collections to explore the ways women have used Super 8 since it first arrived in Latin America in the late 1960s.

The result is a show spanning five decades that includes works by twenty artists from Mexico, Brazil, Cuba, Chile, and Argentina. The first gallery presents viewers with documentation from the ’60s and ’70s, an era in which Super 8 was wildly popular and the feminist movement arose in the Americas. The interviews, black-and-white photos, posters, and publications evoke the artist-led discussions around the role of women in society that were happening at the time. This room also houses Marta Minujín’s Nido de Hornero (Hornero Bird Nest, 1976/2015/2018), an ovenlike adobe structure that one can walk into to watch two versions of her 1976 film Autogeografía (Autogeography); in both, she sits atop a white sheet wearing mirrored sunglasses, smiling as unseen hands bury her in dirt.

The main gallery is a black-walled room divided into smaller spaces by panels of sheer white fabric that allow for the projected films and some of the sounds to softly contaminate one another. Highlights include Sarah Minter’s Adagio (1980), the first Super 8 film by the pioneering Mexican video artist. In it, a bored but sexually active woman, played by Minter, flies away in her mind to an adventurous and slightly threatening scenario where she sunbathes in a parking lot and is accosted by a sexy glam-rock gang. In Arena (Sand, 1986) and Canción Gitana (Gypsy Song, 1987), Silvia Gruner anticipates the sensibilities of the feminist new materialism that emerged in the ’90s, as her body freely interacts with sand dunes, rocks, and feet that tap-dance all around her face while she laughs nonchalantly. Another favorite was Ximena Cuevas’s hilarious Antes de la Televisión (Before TV, 1983), which portrays a woman drinking coffee in her pajamas suddenly being attacked (fatally) by her vacuum cleaner.

The films are organized according to thematic categories that manage to be both too literal and overly vague: “Autogeographies,” “Recordings and Performances,” “Camera Mirror,” “Pump up the Volume,” “Locating the Quotidian,” “Artists on Art,” and “Documentary Appropriation.” “Autogeographies” comprises Minujín’s previously mentioned films of the same title; Ana Mendieta’s well-known Volcano (1979), a recording of the eruption of a vaginal-looking clay volcano; and Rosario Cobo’s Caída Libre (Free Fall, 2013–15), in which the Chilean artist drops a Super 8 camera from the top of a building in Mexico City as a comment on state-sponsored urban development. While I get the “auto” implications of Minujín burying herself and Mendieta filming an exploding vagina, I really don’t see how throwing a camera off a building as a comment on modernization is self-reflexive. The exhibition’s divisions are not helpful and detract from the most valuable takeaway of the show: that feminist, women-made artworks are as heterogeneous, come in as many shapes and genres, and have as many different preoccupations as any other kind of art.