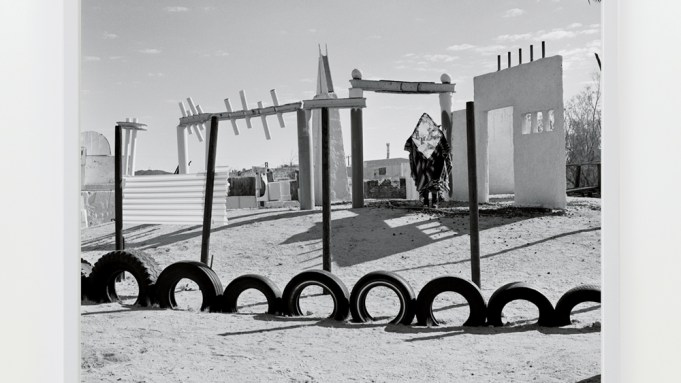 The hallmark of LaToya Ruby Frazier’s photographic work has been its blend of the political and the everyday. Often cited as an heir to Walker Evans, Dorothea Lange, and Gordon Parks, she uses her artistic practice to advocate for racial and economic justice, particularly on the part of communities blighted by deindustrialization. Frazier began photographing her hometown of Braddock, Pennsylvania, when she was still a teenager, producing a series of photographs that would help earn her a 2015 MacArthur fellowship. Over the years her photography has brought her as far afield as Belgium, where she created a series centered on a former coal-mining community in the Borinage region. For her recent survey exhibition, she covered the exterior of Gavin Brown’s four-story gallery in Harlem with a forty-by-twenty-foot vinyl print of three vertically arranged photographs, each depicting a single word spelled out in water bottles inserted into a chain-link fence alongside a commercial thruway in Flint, Michigan. Together, the words read, WATER IS LIFE. It’s an SOS from the Midwestern town that has become an emblem of gross municipal negligence in this era of extreme inequality.

Inside the gallery, on the ground floor, were photographs from “Flint Is Family” (2016/17). Originally undertaken as part of a feature story on Flint for Elle, the series documents the daily lives of the residents, many of whom are still drinking from plastic bottles nearly four years after the city’s water supply was contaminated by corroded lead pipes. Shea Cobb and her family, the subjects of numerous photographs, are surviving members of a black working-class community that had already been hit hard by the closure of numerous Flint-based automobile plants throughout the 1980s and ’90s and by the 2007–13 Great Recession before falling victim to the most recent human-made disaster. One striking image depicts Shea pouring bottled water into her daughter’s mouth during a daily toothbrushing ritual. Several additional works center on the wedding of Shea’s cousin, Nephratiti. The event figures within the series as a joyful diversion, a reminder that life goes on even in the face of extended crisis.

Interspersed among images of the Cobb family were works documenting Barack Obama’s 2016 visit to Flint. In one, a protester dressed in jailbird stripes and wearing a giant sculpted head caricaturing Michigan’s Republican governor, Rick Snyder, holds a sign that reads: PRESIDENT OBAMA STAND WITH FLINT NOT WITH RICK. Before leaving office, Obama signed a large relief bill targeting the water crisis. But during his visit to Flint, he had carried out a hollow publicity stunt in which he appeared before cameras drinking from a glass of city water in a gesture of reassurance to the local community. The moment is captured in a photograph of Shea’s aunt and uncle gazing at a television broadcast of the former president standing at a podium mid-sip. Another work features a mural painting in which a young dark-skinned girl, her eyes aglow, gazes upward at the grinning likeness of the country’s first black president. The gaping voids in Obama’s cranium, where the mural intersects with a pair of broken windows, imbue the memorial with a dolefulness appropriate to a presidency that brought more hope than it did change to struggling communities across the Rust Belt.

On the second floor of the gallery, a selection of prints from “The Notion of Family” (2001–14), the celebrated series that launched Frazier’s career, offered a glimpse into the affinities between the artist’s own upbringing and the lives of Flint residents. Like Flint, Braddock is a former factory town now hobbled by epidemics of poverty and drugs. A number of works from the series document the closure, announced in 2010, of the UPMC Braddock Hospital, a major primary care facility that had been Braddock’s largest local employer. These images were displayed alongside photographs of domestic life, this time depicting scenes from Frazier’s own childhood home.

Intergenerational solidarity is a dominant theme in these works. Several prominently feature Frazier’s grandmother Ruby, whose piercing stare the artist inherited. In one work from 2007, Ruby is pictured dozing in her recliner, surrounded by the porcelain doll collection that was her passion. In another from the same year, Frazier and her younger sister appear alongside Ruby, watching a television outside the frame. These scenes of quiet family life poignantly contextualize Frazier’s The Bedroom I Shared with Grandma Ruby (227 Holland Avenue), a photograph from two years later, in which the absence of the family matriarch—who had since moved into a senior residence—is represented in the form of an empty bedroom, its walls patterned with white squares where pictures formerly hung.

The importance of photographic imagery to Frazier’s childhood is evident from the several works in which family portraits are featured, either framed and displayed on walls and furniture or taped to the kitchen refrigerator. In “A Pilgrimage to Noah Purifoy’s Desert Art Museum,” the final series in the exhibition, Frazier honors a very different source of creative inspiration. Perhaps best known for works constructed out of materials scavenged in the aftermath of the Watts Riots, Noah Purifoy left Los Angeles for Joshua Tree in the late 1980s. There, over the course of fifteen years, he created an outdoor museum of the so-called junk dada sculptures that comprise the main subject of Frazier’s series: figures and structures and vehicles cobbled together from found materials such as old tires, bike wheels, beer kegs, and driftwood.

Frazier undertook her 2016 pilgrimage to the site with her friend and fellow artist Abigail DeVille, who also makes work from discarded materials and who seems as influential to Frazier’s series as Purifoy himself. Frazier has spoken about being brought to tears as she watched her travel companion move among the sculptures, suddenly struck by the realization that, in Purifoy, the two women had found “an ally and a predecessor.” In several images DeVille can be seen draped in a large poncho, carrying a diamond-shaped mirrored construction—just another apparition amid Purifoy’s surreal cast of characters. Although the works are in many ways a departure for Frazier, in these photographic landscapes populated by living and inanimate figures of inspiration she appears to be saying: here, too, is family.