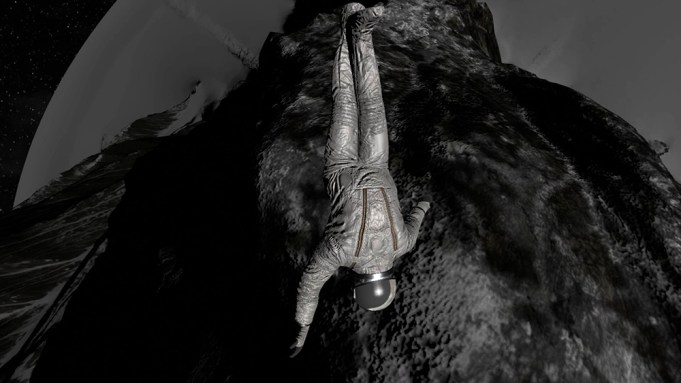 We arrive on the moon in a deep canyon. The white butte in the distance marks the lunar basin and range. The darkness glimmers with astral bodies, where constellations begin to emerge: a Spanish galleon, a polar bear, a diamond, a rose, the symbol for infinity. These images appear overhead like the legend of a map or a dream, then dissolve. As we move through a vertiginous landscape encountering scenes of wreckage and recombination, we feel ourselves floating or falling.

To the Moon(2018) is the third work in a virtual reality trilogy by Laurie Anderson and Hsin-Chien Huang, who have collaborated since 1994. Commissioned by the Louisiana Museum of Modern Art in Denmark, its US premiere at the Museum of Natural Historymarked the fiftieth anniversary of the Apollo 11 moon landing. The fifteen-minute space fantasia joins a number of exhibitions, events, and books across the country that commemorate the first human steps on the moon. The work also reflects Anderson’s longstanding interest in spaceflight as a staging ground for models of authority and freedom.

In the immersive environment of To the Moon, the lunar body, associated with cycles of death, fertility, and rebirth, offers a site where we might undergo our own phase-shift or change of state. Many film representations of moon exploration—from George Méliès’s settler-colonial fantasy Le Voyage Dans la Lune (1902) to Hollywood blockbusters like Apollo 13 (1995)—focus on the challenges of getting to the moon and back, of conquering or surmounting it. In the Western imagination, the moon mainly serves as a benchmark: a measure of our technological ingenuity and steely nerves.

Anderson and Huang, however, envision a terrain of dislocation, lyric uncertainty, and breathtaking loss. The artists make no effort to know or proffer authority over the moon, but rather emphasize its estranging qualities in scenes that reflect earthly fantasies and fears. We encounter the ghostly forms of extinct dinosaurs built of white blocks of DNA code, which morph into an automobile by the alchemy of fossil fuels. We find a graveyard of radioactive waste and a desolate plain marked by the flags of China, Russia, and the United States, where dark mineral gems the size of boulders rain down. These images inscribe the lunar landscape with imperialist power, petrochemical dependence, and waves of extinction.

In the climactic scene, we stand on the summit of a snowy mountain and watch our body plunge off the edge. We see the form of an astronaut, encased in a spacesuit, drifting down into the abyss; it seems to peel off from our own bodies. Sealed inside the private animation of my headset, near a handful of others seated on low stools, I felt a sense of astonishment followed by swift grief. On this trip to the moon, we are not going home—at least, not by the way we came.

The image of the astronaut falling facedown references the small aluminum sculpture, Fallen Astronaut, installed on the moon by the crew of Apollo 15 to memorialize those who died in the course of space exploration. (Anderson has been thinking about the sculpture for a long time; she mentioned it in a 1977 interview for the Video Data Bank.) The condition of loss embedded in the sculptureperhaps informs Anderson and Huang’s conception of outer space—and their articulation of freedom, as distinct from conquest.

Anderson’s fascination with the possibilities of flight was apparent in her 1981 hit “O Superman” and her first album Big Science(1982). In 1978, she debuted a performance called The Language of the Future,after the gnomic observation of William Burroughs that “the future of writing is in Space, not Time.” Anderson’s monologue, which recalls a surreal encounter on an airplane, sends her voice plunging through the circuitry of an Eventide H910 harmonizer. The piece is charged with the suspense of air travel, the fear of falling, and the on-again, off-again currents of change. “Current runs through bodies and then it doesn’t / On again / Off again,” Anderson intones. “Always two things switching / One thing instantly replaces another.” Here, the language of the future is the mechanism of movement or escape from the forces of overdetermination, represented by the voice of the captain over the plane’s intercom or the voice on the other end of a telephone saying, “Please do not hang up.”

In To the Moon, Anderson’s long running dialogue between a command structure and interactive freedom finds a new line of inquiry. The monologue’s authority is displaced by the order of the virtual environment. Though VR promises the freedom to go and look where we choose, To the Moon frequently requires passive viewing, as if we’re watching an IMAX 3D movie; only when the red light on our wrist appears can we zoom around or direct or own movement. The question of who’s in charge and how to activate our agency has dogged Anderson throughout her work. She described her “secret goal” for To the Moon as creating something that makes “people feel free and not trapped by their minds.” For Anderson, a practicing Buddhist, the mind may be the most powerful trap.

Toward the end of our journey, we hear a voice that seems to come from everywhere and nowhere. “You know the reason that I really love the stars,” says the voice, “is that we cannot hurt them.” In this world, freedom is not only freedom for the goggle-wearing user. Forms of sovereignty are distributed across a vivid spectrum of matter. We observe nonhuman and more-than-human materials—hunks of rock, chains of DNA, swarms of data—mutate and mobilize. At one point, we watch our hands morph into long, waving tentacles that extend and writhe in space. Honoring the agency of nonhuman matter, the work rescues us from the solipsistic trap of VR, which encases us in our own point of view.In this way, Anderson and Huang complicate the human-centered logic that drives technopositivist and nationalist narratives of space exploration. To the Moon pushes us toward a more sustainable materialism.