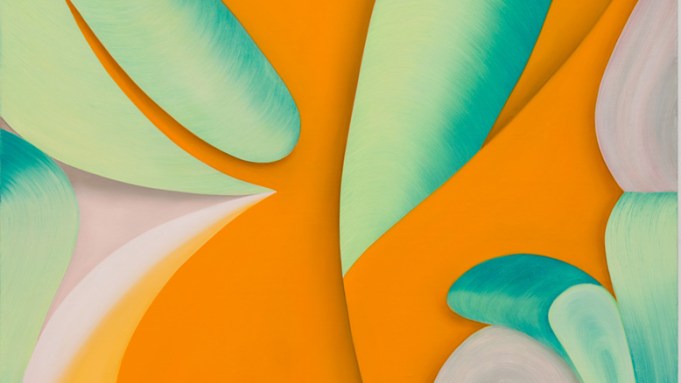 The nine new paintings in Lesley Vance’s show (all untitled and 2019) were a dramatic departure from the works she exhibited in her previous New York solo presentation, at the FLAG Art Foundation in 2012, and at the 2010 Whitney Biennial. Vance, who was born in Milwaukee in 1977 and lives in Los Angeles, first gained national attention for intimately scaled oil-on-canvas abstractions based on photographs of still life arrangements that she made in her studio with materials like leaves, seashells, and tree branches. Featuring interlocking patches of muted, earthy color applied with richly textured, bravura brushstrokes on dark backgrounds, the paintings often resembled deconstructed Chardin still lifes, albeit with a Cubist flair. In recent years, Vance has turned toward an almost trompe l’oeil kind of imagery, with flatter surfaces and more brilliant color.

The latest works are notably large—up to 36 by 28 inches, epic by her previous standards—and wholly abstract, with few, if any, allusions to the empirical world. Tightly composed and displaying a heightened, luminous palette, they contain compressed networks of hard-edge curvilinear shapes that often resemble Möbius strips or undulating tubes. Drop shadows lend a three-dimensional effect to the shapes, which appear to writhe in a shallow, subtly illusionistic space. In one of the most outstanding works, thick bands of bright yellow outlined with ribbons of searing vermilion pulsate against a field of teal. The sumptuous, ambiguous space thwarts any definitive sense of foreground and background, and the swirling motion is almost dizzying. The composition puts forth a visual puzzle comparable to Bridget Riley’s Op works of the 1960s or Karin Davie’s looping gestural abstractions of the ’90s.

While optical games are clearly an important aspect of Vance’s work, they are not her primary endeavor. In interviews she credits the landscapes and nature-inspired abstractions of Georgia O’Keeffe and the process-oriented work of Carla Accardi as major inspirations. This show, in fact, coincided with “Aftereffect: Georgia O’Keeffe and Contemporary Painting,” an exhibition at the Museum of Contemporary Art Denver that paired O’Keeffe’s work with that of Vance and several other young artists. Vance also takes up the sort of abstract illusionism established in the 1970s and ’80s by artists like James Havard and Jack Lembeck—a genre that made regular use of drop shadows—sharing common ground with contemporary painters like Laura Owens and younger colleagues such as Josh Reames and Jan-Ole Schiemann.

Vance’s paintings offer an almost topological space—a rather disorienting realm in which indeterminate, mutable elements counter flat planes and solid shapes. In one work, yellow and blue snaking forms interact with a blue rectangle on the left and a yellow L shape that overlaps it on the right, producing a rhythmic movement. Resembling a sculptural relief, a large vertical painting features a subtly shaded orange-and-turquoise teardrop shape in the upper right that appears, by turns, concave and convex. Vance builds a durational element into such paintings, creating mesmerizing compositions that seem to shift and change as one views them.