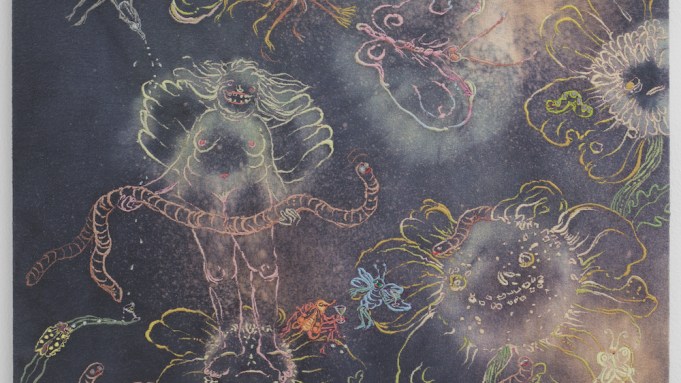 Viewing Lila de Magalhaes’s exhibition “Spank the Sky,” at Lulu, I was reminded of a recently circulating meme comparing the angels that have come to populate the cultural imaginary—chubby blond cherubs and hot, haloed femmes—to those described in the Bible: animal-headed creatures covered in wings and eyes, full of God’s righteous wrath. The seraph depicted in The Merry Arsonist (all works 2020) would fit right in with the eldritch beings imagined in the Old Testament. A caped creature—part insect, part mammal—cruises through a dark sky, like an emissary from another world, illuminating its surroundings with torchlike matches held up in its many hands. De Magalhaes’s technique lends the scene an eerie mysticism: the show’s five works are all intricate embroideries on dyed and stretched bedsheets, lightly supplemented by chalk pastel. The textures are slightly worn, the colors soft and subdued, heightening the preternatural strangeness of her imagery.

In this handful of works, the Brazilian-Swiss artist weaves a tender cosmology where creatures of all kinds meet: earthly and otherworldly, large and small, weird and mundane. In Filhota, set against a field of tie-dyed midnight blue and lime green that is at once celestial and psychedelic, a dreamy centipede circling the center of the composition fixes its buggy eyes on an anthropomorphized butterfly with pouty red lips waving flirtily from the lower left corner. They are surrounded by a similar cast of characters: a buzzing fly with vibrating wings delicately stitched in lilac and pink, a dragonfly with squiggly limbs, a round little bumblebee. The Night Shift suggests a similarly lively after-hours get together. A naked angel with a menacing smile stands on the face of a grimacing flower as a worm playfully chews on its petal. Above them, a dragonfly pursues a butterfly, and another pair of winged insects share a cocktail. In this nocturnal scene, de Magalhaes plays with the cheerful animism typical of children’s books, where teacups and shoes possess names and emotions, but uses it to different ends, imagining living beings that we tend to regard as objects, like flowers and insects, sharing martinis and engaging in light bondage.

Only two of the works depict humans directly. In Two Gardeners, a figure peers her eye into a hole in the dirt to find a worm’s eye looking back. The worm is the neighbor of a pair of beets, and a cross section of their underground abode takes up most of the image; the view de Magalhaes presents is their world peering into ours instead of the other way around. But the stunning Pyromania complicates the borders between us and them entirely: delineated in yellow on a pink ground is the outline of a woman’s body viewed from the back, with snails, butterflies, worms, and centipedes catching a ride on top as she crawls away, all surrounded by vibrating, fiery lines. A tangle of human and nonhuman limbs, heads, and eyes, the scene seems less like an emergency exit from a fire than an ecstatic, hallucinatory communion, the euphoric dissolution of boundaries.

De Magalhaes’s works remind us of a reality that has become more painfully obvious lately: that nonhuman beings are not and have never been separate from us, that we are all symbiotic partners, sharing a planet—and even our individual bodies—with visible or invisible collaborators. Her depiction of this coexistence as enchanted and poetic offers a welcome glimpse of fairy-tale hope in a world that feels like it’s nearing the end.

This review appears under the title “Lila de Magalhaes” in the January/February 2021 issue, p. 77