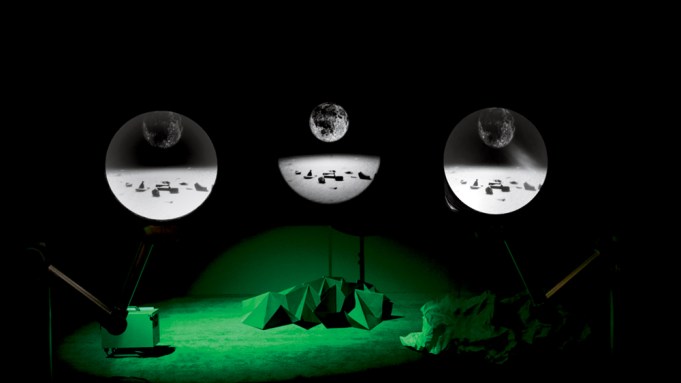 Developed in 2008 by British psychiatrist Julian Leff, avatar therapy is a computer-based treatment that helps schizophrenics battle auditory hallucinations. A patient undergoing the process designs a digital avatar to give external form to her inner voices; a therapist then controls this figure while encouraging the patient to oppose her tormentor. In preparation for her powerful video installation Every Thought There Ever Was (2018), British artist Lindsay Seers interviewed Leff and listened to a recording of an avatar therapy session. Drawing on this and other research into the mental disorder, she has created a dense, atmospheric work that evokes the troubled inner workings of a schizophrenic mind.

Seers is best known for video installations that explore complex and often recondite philosophical ideas through elliptical, semi-fictional stories. Every Thought, by contrast, is more experiential than narrative in focus. The video’s visuals comprise mostly a collage of disquieting digital animations: sinister faces with mouths in the place of their eyes, small robots, rotating racks of eyeballs, devilish symbols, and so forth. There is also filmed footage of bugs. The images unfold across three circular screens, the flanking two intermittently moving toward and away from the viewer by way of robotic arms. Additionally, a colored spotlight animates origami-like paper forms placed on the floor and is periodically shined at the viewer’s face.

The layered audio track, accessed through headphones, is an agitating cacophony that includes the buzzing of insects, the clicking of computer keys, and loud music in various genres. Interspersed throughout this soundscape are declarations from figures such as a persecuting avatar (“You worthless piece of shit, you’ve failed in every single thing I’ve asked of you”), a supportive therapist (“Yes, I can hear the voices, George, they’re telling you to cut off your hair”), and various patients (“I can hear all the voices of the people; they enter my mind as I walk along the street and there is so much anger and hatred”). The disembodied voices are sometimes menacingly distorted.

With its incessant audiovisual bombardment and competing voices suggesting a mind at odds with itself, Every Thought certainly induces empathy for those suffering from schizophrenia. Yet the work does not entirely cohere. This is because Seers includes a narrative component that clashes with the video’s overall atmospheric structure. A loose story centers on Victorian army surgeon James Miranda Barry (ca. 1789–1865), a historical figure here magically reborn as an avatar. Like several characters in Seers’s oeuvre, Barry has a complex gender identity: he lived as a man but was biologically female. Though the press release identifies him as the video’s narrator, his voice is introduced only midway through and his character is not really developed.

In an adjacent room and in the foyer, Seers displays drawings and sculptural paper collages. Some of these were crafted by schizophrenic patients with whom the artist corresponded, and others she made herself, influenced by their style. These beautifully intricate works, most built up out of repetitive markings, evoke restlessly inventive mental processes. Human figures, animals, and insects loom out of insistent geometric patterns. Organic sculpted forms mushroom and swirl, a few spilling out of their frames like escaping thoughts. If Seer’s video presents schizophrenia as an excruciating mental disorder, these paper works suggest that beauty can also emerge from the condition.