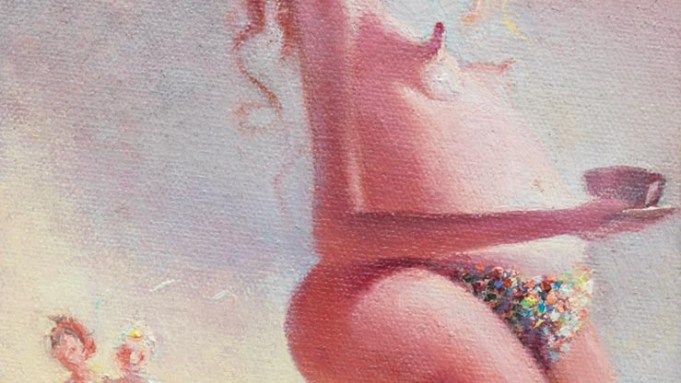 Is Lisa Yuskavage a feminist? When she began exhibiting her candy-colored paintings of barely legal pinups in the early 1990s, it was a question that endlessly preoccupied critics. In a particularly strident 1994 review in Artforum, Lane Relyea described her paintings as “visual stink bombs” whose sickly sweetness masked a rotten misogynistic core. Others insisted that her work was in fact a send-up of the male gaze, a subversive tour through the minefield of women’s psychosexual development in a culture saturated with impossible bodies, from Barbie dolls to Penthouse Pets. A 2007 Washington Post headline put it bluntly: “Lisa Yuskavage: Critiquing Prurient Sexuality, or Disingenuously Peddling a Soft-Porn Aesthetic?”

All this hand-wringing seemed a little quaint as I surveyed “Babie Brood” at David Zwirner’s Nineteenth Street location. The show featured roughly ninety small paintings from 1985 to the present, the most scandalous thing about which wasn’t their sexual explicitness—much of the imagery was safely PG-13—but their style: a luminous, lowbrow Mannerism, rendered with such self-evident technical brilliance that the works’ tackiness begins to feel like an affront. Yuskavage’s fantasyland takes its cues from erotica, sure, but also the treacly sentimentality of Hallmark cards and grandma’s living room tchotchkes. Instead of debating the politics of her work, we might ask: why would a painter so skilled want to paint like this?

Representing all of Yuskavage’s major series, “Babie Brood” was essentially a retrospective—if, given the scale of the examples, a miniaturized one. The earliest pieces on view, White Light (1985) and Poetess: A Shy Anorexic (1989), depict wraithlike young women, fully clothed, glancing modestly at the ground. Here, they served as a foil. Dissatisfied with the wispy portraits of sad girls that populated her first New York solo show, in 1990, Yuskavage stopped painting for a year and then dramatically changed course. She returned with the breakthrough series “Bad Babies,” lurid depictions of doll-like adolescents set against fields of saturated color. In Study for Blonde Jerking Off (1995), a kneeling nude occupies a kelly green void, her solidly modeled torso contrasting with the eerily depthless ground. Squeeze and Relatives (both 1995) suggest the Surrealist trope of the body in pieces, with torsos and splayed thighs dissolving into the pink walls of domestic interiors.

The exhibition’s works were arranged chronologically but also, to a large extent, chromatically, with each series defined as much by Yuskavage’s treatment of light and color as by her choice of subject. “Bad Habits” paintings like Hamass and Sweetpuss (both 1996) feature figures with grotesque, exaggerated bodily proportions shrouded in misty pastel veils. Works like Nipple (1999) and Cookiepuss (1998), based on photographs from Penthouse, depict soft-focus babes emerging from red-tinged shadows, with flashes of white highlighting perky nipples and glossed lips. In the “Northview” series (2000), Yuskavage bathes serene suburban genre scenes of half-dressed women lounging indoors in the warm orange glow of a postcard sunset. A group of wild “Mise en Scenes” are like pastoral acid trips: in Given and Nel’zahs (2010), for instance, spread-legged nudes pose raunchily in a landscape dotted with picturesque peasants, the entire scene cast in shades of blinding Technicolor green.

Around 2015, Yuskavage began incorporating male nudes into her work for the first time. Most of the paintings on view in a concurrent exhibition at Zwirner’s uptown gallery, which featured eight large new canvases, depicted male-female couples. The scenes were more intimate than explicit: in Golden Couple (2018), a lithe woman in short shorts and an unbuttoned shirt faces her partner, arching her back and dangling a glass of wine in one hand; Couple in Bed (2017) offers a tightly cropped view of a postcoital pair from above, their bodies rendered in muted tones of gray-brown, dozing off in a tangle of limbs against a shock of colorful bedding. Several of these compositions had counterparts in the Chelsea show, offering the opportunity to consider the way Yuskavage approaches scale. The larger version of Home (2018), which depicts a standing couple occupying the middle ground of an airy classicizing interior, has a crisp, elegant precision. In Small Home (2018), the brushwork is looser, the space compressed, the color weird and abrasive. I admired the technical accomplishment of the former, but I wanted to keep looking at the latter.

How to Make a Carajillo, the Coffee Cocktail That’s Better Than Your Espresso Martini

Bob Dylan Apologizes Over Autopen Controversy: ‘An Error in Judgement’