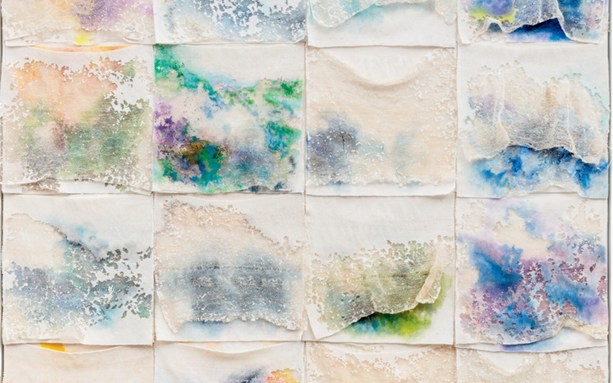 Liza Lou is the contemporary art world’s preeminent poet of beads. She has sewn odes and lamentations with them, used them as a means of witness and a vehicle for critique, expanded their grammar. She continues to prove them more versatile and eloquent than even their ancient, global history would attest.

The Clouds (2015–18), which reigned over this absorbing collection of recent work, is a panoramic installation of some six hundred square, beaded sheets. At fifty feet wide and twenty-three feet high, the piece reads as an immense, immersive splay of pages, a Constable sketchbook writ large. The panels hang loosely from their upper corners, softening the regularity of the grid. Those in the lower rows are mostly solid white; the ones high overhead are blotted with color—violet pools and aqua bleeds, daubs of gold, red, slate, and smoky gray. From afar, the oil paint mimics watercolor in its impressionistic register of atmospheric effects, its fluid chronicle of time. Lou took a hammer to many of the sheets. Broken beads fell away, exposing the delicate skeletal substructure of thread that holds the rows together. These discontinuous fields of bare netting and solid beadwork whisper forcefully of absence and cancellation, of intensive doing, undone.

The show took its title, “Classification and Nomenclature of Clouds,” from the work of Luke Howard, an amateur meteorologist who, in an 1802 lecture, introduced the categories of clouds—cirrus, cumulus, nimbus, and so on—that we continue to use today. This act of sorting and naming offered a historical framework for considering the role of order in Lou’s work. Especially in her grid-oriented wall pieces, geometric order is forever countered by the inevitable—and beautiful—imperfections of the handmade. Right angles skew, rhythms gently break, theory bends to practice.

Like The Clouds, several other pieces arose from observing natural phenomena, and similarly profit from the rich contradiction between the tactile process of their construction and the fleeting, ephemeral experience they evoke. Each conjures something untouchable, even though made expressly by means of repeated touch. Terra/Cloud (2018), a roiling sea of blue beads sculpted into frothy peaks and crags, suggests a solid plot of atmosphere contained within a frame and hung on the wall. Pyroclastic (2016–18), pulsing over its edges with exhilarating, red-hot turbulence, delivers a momentarily stilled volcanic event.

Lou’s art of accretion is formal kin to works by El Anatsui, Tara Donovan, and even Agnes Martin. Her fluency in transforming her basic material is astonishing: the selfsame unit of the bead serves in one instance as a brick in the building of a sturdy plane, in another as a stitch in the weaving of soft fabric, and still elsewhere as the minute particulate of fog. The white, beaded squares that appeared in various contexts throughout the show—as pelt, tile, page, and more—were made by a team of Zulu artisans in the Durban, South Africa, studio Lou established in 2005, a complement to her other homebase, in Los Angeles. The Durban studio has enabled her to complete monumental projects more efficiently, while providing employment and social support to dozens of women. In this regard, too, Lou’s work oscillates in scale between the micro and macro, between individual and collective effort.

In the stirring six-minute video Drawing Instrument (2018), which chronicles the making of two large ink–on–sanded gesso canvases in the show, attention turns exclusively to Lou’s own hand, voice, and mark. Her pen is seen in tight close-up, drawing small circles within circles, linear beadlike forms that compound into burgeoning networks and molecular chains. With each drawn loop, Lou emits an “O” sound, a sung breath. As the screen splits and splits again, the sounds layer into a harmonized chant. Pen, breath, and voice serve in tandem as her drawing instrument.

So much happens on a material level in Lou’s work and always has, since her flamboyant beaded environments of the ’90s, but not at the expense of broader implications. Lou operates at the nexus of domestic craft and the larger social economy. In terms of classification and nomenclature, her work defaults, as ever, to a loop: it is art about making, making about labor, labor become art.