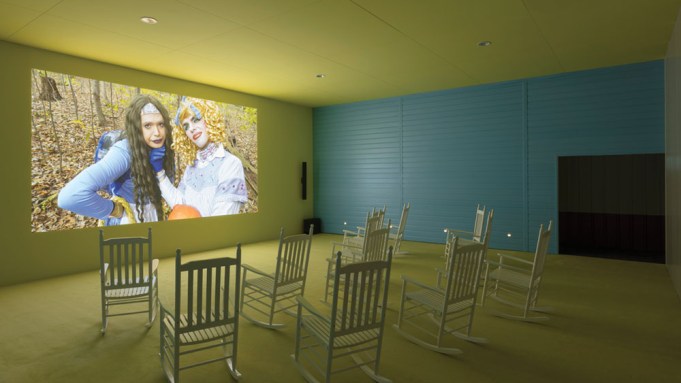 Lizzie Fitch and Ryan Trecartin—a collaborative duo since 2000—have regularly made work that induces what cultural theorist Sianne Ngai calls “stuplimity”—a state of simultaneous overstimulation and boredom. In their show at the Fondazione Prada, “Whether Line,” the artists built up anticipation for their feature-length film—or, to use their preferred term, movie—Plot Front (2019) by way of an architectural installation in the form of an absurdly long queue that took a while to navigate, even if there were no people in front of you. Stanchions delineated a circuitous path through the enormous lobby of the venue, a former distillery, after which a chain-link enclosure lined with chicken wire led into the main exhibition hall in another building. Twenty-three channels of audio recordings spaced along the route played excited, idle chatter reminiscent of the din at a theme park.

Inside the exhibition space, Fitch and Trecartin created a screening environment in the form of a prefab barn turned inside out, with an exposed plywood skeleton and an interior lined with aluminum siding. Viewers could watch the nearly two-hour-long movie either from atop the barn’s watchtower or from rocking chairs placed inside. The barn took up only half the exhibition space, while the rest was left empty save for the caged pathway, making the space feel comically large. Like the time spent winding through the queue, this unfilled space complemented the characteristic too-muchness of Trecartin and Fitch’s movie.

The barn was modeled on one that the artists built on the thirty-two–acre property in rural Ohio that they moved to in 2016. For the past two years, they have been transforming the land into a sprawling, permanent film set—for Plot Front and future works—replete with a lazy river. The movie is informed by their adaptation to their new environment: it revolves around conflicts between a rural queer community and Amish characters like “Neighbor Girl,” played by Trecartin, who is accompanied by a gaggle of clones.

Many scenes center on petty disputes between neighbors over property lines. One neighbor passive-aggressively registers another—the person, not her home—as a historic site so that she must request a permit to change even the way she waves hello. A group of skater boys are forced to camouflage their skate park to blend in with its muddy surroundings, even though it’s recessed on their private property and thus can be seen by outsiders only aerially. At least, this all figured in the version of Plot Front that I saw—the artists continued editing the movie throughout the exhibition’s run, and a final cut will premiere in the Fondazione Prada’s theater sometime in 2020.

Plot Front represents a departure for the duo, in terms of both the film’s form and the rural lifestyles the story depicts. Trecartin and Fitch’s previous movies have often concerned affective experiences of the digital age, their frenetic cuts foregrounding the hyperactive sensation of receiving never-ending push alerts and scrolling through social media feeds. By contrast, Plot Front features a slowed pace and characters who have opted out of digital connectivity, among them the Amish and a disillusioned tech worker looking to withdraw from the rat race and buy a house in the country.

Today, for much of the generation raised on the internet, it’s property ownership, not the slippage between IRL and URL, that seems novel. Plot Front probes the potential of pooling resources and going back to the land as an alternative to the diminishing returns of the gig economy. (This communalism isn’t necessarily utopian: the groups, are, after all, frequently at odds.) “Whether Line” represents a maturation of their collaborative oeuvre, a slowing down through which the artists can explore changing times and ways of life.