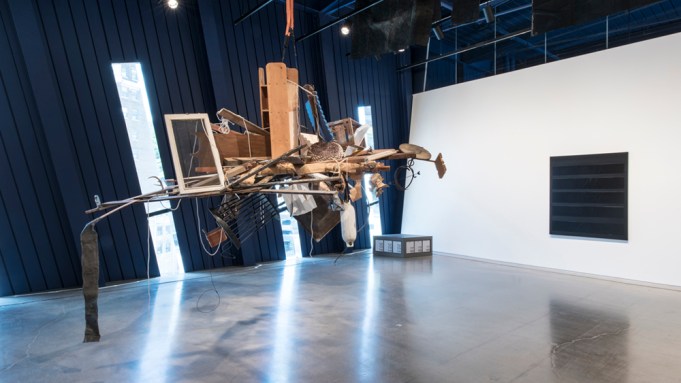 The title of “A Poet*hical Wager,” an exhibition of work by eleven international artists on view at the Museum of Contemporary Art Cleveland through January 28, 2018, comes from a pun made by poet and scholar Joan Retallack, in her book of same name. “If you’re to embrace complex life on earth, if you can no longer pretend that all things are fundamentally simple or elegant, a poetics thickened by an h launches an exploration of art’s significance as, not just about, a form of living in the real world,” Retallack writes.

While the exhibition design eliminates wall texts as a prompt to embrace complexity, most of the works are made in conventional mediums like painting, sculpture, and collage. Doug Ashford’s Next Day (New York Times, pages A1-A28), 2015–16,  redacts the entire first section of the New York Times on the day following the September 11 attacks on the World Trade Center with an overlay of graphic color fields. There are three winsome selections from Iman Issa’s “Heritage Studies” series (2015–); the minimalist sculptures take inspiration both from objects the artist encountered in museums as well as the museum-style didactics that identify their sources, materials, dates, and provenance, making hers the only works in the show with accompanying wall text, as they are part of her presentation. There are also subtle interventions. Oscar Murillo’s Black Paintings (2017), a grouping of oil-stained canvases, hang in the rafters. Rashid Johnson’s Shea Wall (2017) presents a cinder-block partition, mortared with Shea butter, in a remake of Allan Kaprow’s Sweet Wall (1970), a participatory protest intervention staged close to the Berlin Wall, in which Kaprow and others built a cinder block wall using bread and jam as mortar. Emanuel Tovar’s Cantos Baldíos (2017) was performed at the opening night gala as well as for the public opening day festivities.  Two musicians stood back-to-back, immersed knee-deep in a block of unfired clay, as they played various simple wind instruments that emulate birdsong, in an approximation of dialogue.

During the introductory remarks for a panel on October 7 involving six of the artists in the show (Ashford, Tovar, Murillo, Issa, Tariku Shiferaw, and Mario García Torres), curator Andrea Hickey defined “poetics,” one of the terms in the portmanteau “poethical.” It’s “a literary theory that considers how different parts of a text coalesce to affect a reader,” Hickey explained. “I’ve taken that word and applied it to visual art, to think about form and composition in an artwork.” (In other words, she’s interested in aesthetics.) But she neglected, in either her remarks or her catalog essay, to define the second member of the neologism: “ethical.”

While developing the exhibition, Hickey used Retallack’s quote to spark conversations with the participating artists about whether forms could have an ethical position, and how abstract objects connect to the world around us. But any concrete conclusions drawn from these conversations appeared to be few, or at least were not presented as such at the panel. Certainly the openness of potential interpretation is one of art’s great pleasures and social functions, but I confess to a degree of weariness around the act of raising questions without offering answers. The panel discussion engaged neither theoretical arguments about ethics nor current issues around ethics in art—such as the labor disputes surrounding museum construction on Saadiyat Island, Abu Dhabi; the violation of animal rights in artworks, such as Wim Delvoye’s Art Farm (2004–05), which features tattooed pigs; or the longstanding colonial practice of stripping cultural artifacts from their place of origin for the sake of museum and private collections.

Perhaps raising these points in the panel would have been less crucial, but for the so-called “wager” part of the exhibition—another term that passed without deeper consideration, but one that implies a gamble or risk. The panel focused on the desired effect of the exhibition, which was to exhort the viewer to engage in a process of open-ended looking. By de-emphasizing the didactic components of the exhibition, Hickey aimed to empower visitors by encouraging them to form their own first impressions. During the panel, Hickey suggested that this facilitates a “slow looking,” an antidote to the current paradigm of fast-moving media. The absence of wall texts can perhaps force viewers to make an effort to identify what is on display, rather than taking an institutional explanation at face value. Iman Issa bemoaned the ever-shrinking window for the possibility of reflection, for forms that cannot be “instrumentalized” in the service of pat meaning. She expressed a hope that the viewer would “look, think, then look again.”

“One of the things that intrigued me about this show is that you had an inquiry,” Torres said to Hickey. “Definitely the museum is the space where we hope things are slowed down—the artwork is not something that is imposed, but it’s something that is actually bringing in the question, and it’s just hoping to find who is your audience. At the end of the day, artworks are just spaces for relationships that we don’t find in our daily lives. ”But Oscar Murillo said the show was already over. He sees “Poet*hical Wager” (and indeed any exhibition) as an “excuse” to explore, exchange, and negotiate ideas. He and other artists on the panel acknowledged Hickey’s openness to a long process of developing ideas, suggesting an environment of dialogue, rather than a dictatorial model of curatorship that leverages the power of the institution to legitimize certain works; several new works commissioned for the show were created on site, in the weeks leading up to the exhibition, presumably as outcomes of these conversations.

But none of this constitutes an actual wager. The exhibition may prompt to questions about the structure of the institution, but it does so from a comfortable position within it. As Murillo said during the panel there is a “desire for the work to assist outside the confines of where we expect it.” This echoes Retallack’s desire to see art as “a form of living in the real world.” But many of the works included were so immersed in art world conceits and conversations that have been going on for half a century, it was hard to feel as though the exhibition, on the whole, was disruptive in any way to standard institutional models.

It will no doubt be argued that presenting art of this nature pushes the envelope for a Midwestern audience, as though the Midwest lacks erudition or visual literacy—and if this is the subtext, I question the assumption that such a presentation serves as a necessary supplement to what is already happening in Cleveland. If the goal is to explore art’s significance as a form of living in the real world, would it not be a bigger wager to invite something inside the institution that already exists outside of it—something perhaps already recognizable to the immediate community as a useful tool for navigating their existence? Perhaps something that adapts to our ever-increasing pace of looking and living, rather than attempting to disrupt it? Art like this already exists. But to find it, we may have to leave the museum. In Detroit, art springs up in repurposed houses to offset blight in residential neighborhoods, in artmobiles that tour neighborhoods with wandering exhibitions, and in outsider installations that have gone from local oddities to tourist attractions. In Cleveland, an ecosystem of grassroots residency programs and independent practitioners work to meet the community where it lives, while still managing to put it in conversation with the wider world.  Perhaps institutions, like these artists, could put their resources toward serving Rust Belt cities, rather than instructing them.

But that could mean risking the institution entirely. That’s not a smart wager for those housed within it. Though it may, in the end, be considered both more poetic and more ethical.