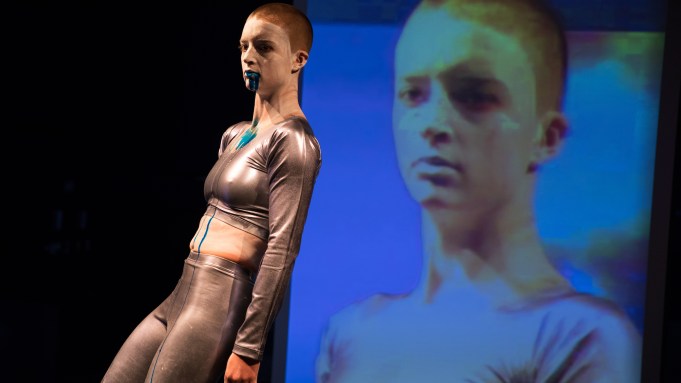 Performance Space New York, previously known as P.S. 122, was founded in 1980 by a group of artists who moved into an abandoned public school building, repurposing its classrooms as studios and, later, performance spaces. In 2011 the institution shifted to nomadic programming as it embarked on a restructuring initiative that included a $37 million renovation of the city-owned building. Though that work is still unfinished, Performance Space acquired temporary permits so that it could launch the final edition of the Coil Festival: a series that has served as the core of the institution’s program since 2006.

On January 10, an eager audience comprising downtown dance luminaries, and eager enthusiasts lined the hallway for the opening night performance. Some were puzzled by the institution’s new logo: a black heart with its upper right lobe cut off. Indeed, it seems a macabre emblem to inaugurate a new future, though the missing piece could be interpreted as a symbolic acknowledgement of the institution’s former life as a DIY, artist-run space. Performance Space New York is led by Jenny Schlenzka, who spearheaded MoMA PS1’s Sunday Sessions. One hopes that she will continue to create more social and flexible programming in her new position. In her opening remarks, Schlenzka announced that Performance Space New York pays tribute to the Lenape people, the tribe who inhabited Lenapehoking, the section of Manhattan now called the East Village. She opened each performance of the festival with the same tribute, acknowledging the cultural and social debt owed to Indigenous people of the region. (This weekend, Performance Space New York officially opens its renovated home with an event organized in partnership with the Lenape Center.)

Social consciousness extended beyond opening remarks and permeated the festival’s program. Race, body image, violence, and technological alienation emerged as common themes. Choreographer Heather Kravas opened the festival with visions of beauty (2017), an ensemble performance that began with the nine dancers laying in a star formation. They dispersed and began a series of slow, erotic movements, eventually laying foot-to-head or, in some instances, on top of each other, undulating in a serpentine row of bodies. Between eruptions of classical music and manic synth-rock, layers of clothes came off, revealing the varied body types of the mostly male dancers. Toward the end of the piece, several of the dancers sprinted toward each other and clutched each other’s hands to spin in human pinwheels of surprising velocity. From the front row one could feel the breeze generated by their movement.

Atlanta Eke’s Body of Work (2014) featured several large, freestanding video screens that dominated the stage and acted as interlocutors in the solo piece, performed by Ivey Wawn. The elfin dancer emerged in a metallic bodysuit and launched into a series of  extended movements that were recorded and then played on the screens. With each new set of movements, more feedback appeared on screen, layering Wawn’s image behind her like a visual echo. At times she seemed to defy or resist the screens’ dominance. At other moments, she embraced it as a partner, allowing the playback to guide her actions.

Desert Body Creep (2016), performed and choreographed by Angela Goh, revealed an unexpected relationship between physical exertion and dwindling natural resources. Goh began her piece with a series of painfully slow movements, evocative of tai chi. At first, her gestures felt meditative. But they soon began to seem defiant, as if gravity were being deployed as a metaphor for resistance. A plume of smoke from a fog machine hung thick over the stage in a horizon line. Under this hazy cover, Goh crawled on all fours, prowling wolflike through a minimal set that consisted primarily of a few haphazardly placed piles of pale fabric. Goh lifted one green, shimmery piece and enclosed herself in it, then extended her arms forward, creating a mouthlike opening in her cocoon. She proceeded to slither around “devouring” the remaining piles like a bottom-feeding sea creature.

Dane Terry offered a more directly narrative experience. In the context of Coil, the thirty-five-year-old musician represented a bridge between the old guard of downtown performance and a newer, slightly more polished aesthetic. With heavily tattooed arms, Terry presents an appealing amalgamation of blue-collar middle America and downtown aesthete. His wild eyes flashed from behind his keyboard as he belted out songs in a distinctive countertenor. His piece was titled Jupiter’s Lifeless Moons (2017), a hybrid of autobiography, science fiction, and romance following a young man through his misadventures in the Pepper Heights Zoo. Both tender and irreverent, Terry, along with three incredible backup singers, executed a hundred-minute-long epic tale that crackled with wit and energy.

The festival concluded with the debut of David Thomson’s he his own mythical beast (2017), a brilliant exploration of the fluid intertwining of race, language, and power dynamics. The cast consisted of four performers: a white woman, a black woman, and two black men. In one sequence, the white woman kicked and dragged one of the men as the other woman shined a light on them, following their movements around the floor. The lamp-carrier shifted roles and spoke about the exclusion of “black voices” from artificial intelligence platforms such as Siri.  In the middle of the performance, the two male dancers sat down facing each other and shared stories about their own histories of violence. One of the men put on a billowing sheer white garment and stilettos, adopting the persona of an imperious drag queen named Venus. At one point, Venus delivered a monologue about the therapeutic value of chopping and caramelizing onions. The piece concluded with Venus, dripping sweat, strutting around the stage in a skin-tight black latex hood, working her now-sweat-stained white gown, giving us life.

As the final performance concluded, the spirit and soul out of which the institution was born suddenly filled the theater, and a palpable sense of optimism eclipsed the doubt or skepticism one felt about the institution’s rebranding. The labor and craft offered up by the dancers, performers, and musicians who created the work was no less vibrant when performed in the new, modernized spaces. The Coil Festival proved to be a well-constructed, dynamic tribute to the legacy of P.S.122, as well as a glimpse into the future of Performance Space New York.