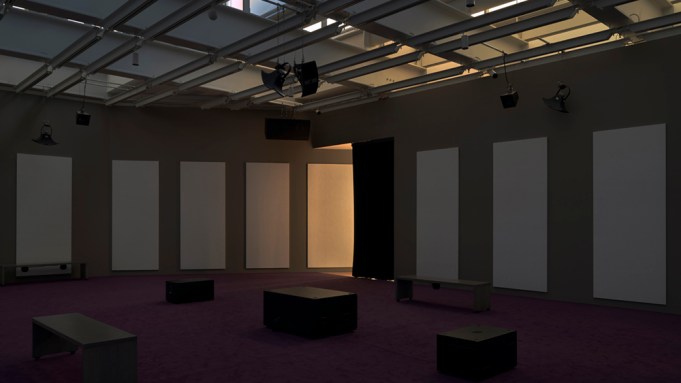 In Kevin Beasley’s exhibition “A view of a landscape,” at the Whitney Museum of American Art through March 10, a one-ton electric induction cotton gin motor—leaden gray and streaked with golden brown, deep orange, and dull blue-green patina—runs in soundproofed silence inside a glass vitrine. It is like an animal restrained, carefully held in place, its energy kept from us. The implication is that its noise would be too much to bear up close. Viewers skirt around, hesitant to go near. It is a shock to see a motor naked this way, when industrial design shields us from seeing through casings to mechanical guts. It made me try to remember what horsepower feels like, reverberating in the air. Contact microphones are attached to the motor, absorbing its vibrations; lavalier, condensed, and dynamic microphones, some encased in gray muffs, are positioned carefully. Others hang above on monofilaments, like parts of a mobile.

In 2012, while an MFA student at Yale, Beasley drove down to Maplesville, Alabama, to buy this motor from a farmer. It had been in active use running a cotton gin from the 1940s to the early ’70s. After exhibiting it dormant in his graduate thesis exhibition that year, Beasley made it operational in 2017.

The unseen companion to the motor Beasley restored is the cotton gin, a machine invented by Eli Whitney in 1793 to separate cotton fiber from its seeds. Through the nineteenth century, the gin’s rate of production—fifty times what a person could process—multiplied the need for land to produce cotton and the slave labor to plant and harvest it, radically changing the political and economic landscape of the United States. Slaves no longer had to pick out seeds from raw cotton, but their numbers tripled as the demand for cotton grew. After the Civil War, the gin fueled the nightmare economy of sharecropping. Emancipated slaves became indentured, renting land and harvesting crops in an interminable cycle of debt, enforced by systemic violence. Beasley’s motor is a bittersweet figure, a hollow triumph of technology in the wake of so much human loss.

When I first stepped onto the eighth floor, I was confronted by The Reunion, the first of Beasley’s three, overwhelming, eight-by-ten-foot slab sculptures. Found objects are embedded in a total of 2,500 pounds of raw cotton and frozen in place with resin. Scraps of fabric sketch out a field of flowers. A green cotton bale strap cuts through across soft feathers atop floral house dresses. To the left is the gallery that holds the motor; far to the right is a listening room, a long gallery with beige acoustic paneling. Massive subwoofers and speakers cluster in the center. A gorgeous, thick eggplant carpet absorbs footfall. Amid this color scheme, blue, green, purple, and orange lights blink on an impressive mixing board and a customized system of modular synthesizers on racks. We register this as a futuristic dashboard, and the surroundings as a plush, nostalgic rendering of a mission control room from ’60s science-fiction movies.

The air feels full of staticky fuzz. The synthesizers modulate the microphones’ live feeds. They are recombined in all their choppy, jagged variability, into a deep, consuming drone. Beasley programmed the black Midas digital mixer to manipulate, attenuate, pitch, and distribute the motor’s sound signature, its clicks and whines, at once foreign and familiar.

In previous works, Beasley has embedded microphones and speakers in his sculptures as sounding devices; they probe viewers to open up new affective dimensions. Here, he evokes the labor involved in cotton production over two centuries with the churning of the rotor, the spindle’s high whine, a faint, magical bell-like tinkling from somewhere unknown in the machine, the almost human susurrations and sighs. Listeners sit on the floor, or on the subwoofers and benches. They close their eyes and hear cadence in the drone, a repeated ten-second phrase that builds in iterations. The hours pass, revealing minute differences from phrase to phrase. Beasley suspends his listeners in a sonic cocoon that brings them as close to the inside of a machine as they can be. Babies crawl on the floor, cooing.

I found it hard to leave, but vibrating, I moved out to the slab sculptures. I carried the sounds like a thick blanket wrapped around my head. Looking at these stelae forensically, I could home in on impossible details and zoom out, much as the sound helped contract and expand my focus. The Acquisition, the slab closest to the listening room, is a record of Beasley’s private meditations on the motor over six years. A bit of resin drips from the “Line” to the “Insert” plugin of a Samick sound mixer. From above, the slab would read as an innocuous dorm bed: gray Hanes briefs twisted up with headphones, a collegiate laptop. But as my eye dropped down through the resin mass into a modified fan cage, I spied a cotton gin’s fan belt, the engine of subconscious drive. Overalls and hoodies stand stiff, upright. Cut deep into the resin, their pained, elegant shapes look as if they were hung in an altar.

Campus stands perpendicular to The Acquisition, jutting into the gallery. In the top right corner floats a cover of Atlas of the Transatlantic Slave Trade, a historical monograph, streaked and bubbled with blood-red resin-paint mix, marking the tasteful imprimatur of Yale University Press, the press of the school that Eli Whitney generously supported. Blackface clown masks with horrible dots for eyes in silver balls peer down over an 1858 map of the slave trade and a Yale School of Art graduation collar, cap and gown, roiling in the clear waxy resin. Through the outer casing of resin, blue du-rags retrace the slave trade routes seen in the maps with calligraphic delicacy. What is the psychic effect of attending a school where students learn official histories of slavery and black Marxism in rooms built on slave trade profits? How can one counter the intimation that one is liberated when given access to these elite rooms? How do we reckon with epigenetic trauma? Is sound a way to begin that work?

I returned to listen to the motor. The longer I sat, the more the room felt like a sanctuary. I looked inward. I rotated between three benches, equipped with “butt kickers” underneath; these controllable bass amplifiers shudder one vigorously at intervals. One of the great pleasures of a relentless drone show—like one by bands Fushitsusha or Sunn O))—is feeling disassembled. Low-frequency vibrations in concert can make it feel like your bones are loosening in your flesh; the bass passes as a wall through the pelvis, core, chest, right out the back. Beasley’s motor reared its head beneath me, a beast surfacing then retreating. I was broken up; I allowed thoughts and sensations to enter. I felt time stretch. I thought of everything I was not hearing around the motor. What is the sound of seeds being separated from their boll? What sounds did workers make? What conversations took place between sharecroppers and owners of the mill the motor would have run in? I see the turns of the conveyor belt, the manual and then mechanical sifting of cotton, the thud of cotton bales hitting the ground.

I couldn’t begin to imagine all the suffering generated by the cotton gin, but here, I could access a communal space of consideration. This accretive soundscape is a threshold through which I can picture the past.  I watched others listen. I imagined how they might understand their position in relation to history. In this space we might account for both our complicity, and the necessary work of constant reckoning, with history—not for absolution, but possibly toward grace.