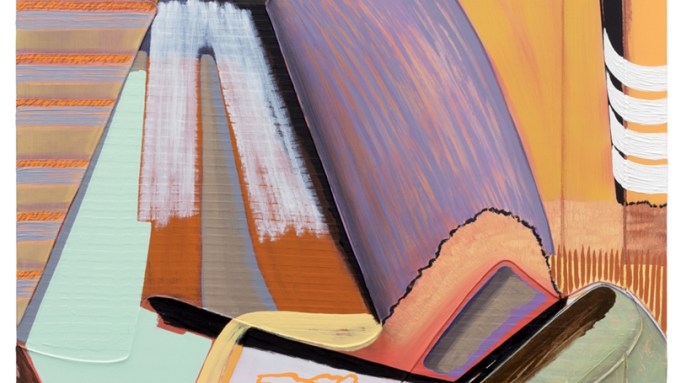 Upon entering Magalie Guérin’s exhibition at Corbett vs. Dempsey, “bunker,” one may have wondered whether the Chicago-based painter’s modestly scaled abstractions were assertive enough for the roomy venue. The eight paintings and nine drawings (all 2017) were nearly dwarfed by long stretches of wall space. The drawings, which hung in a row to the left, appeared at a distance to be a dull collection of graphite whispers.

Further investigation proved how thoroughly wrong such initial impressions were. In the drawings, for instance, Guérin’s mark-making is richly varied, joining subdued passages of cross-hatching in fine, soft pencil with bolder thatched areas and portions carved out with an eraser. Jet-black lines appear in different configurations: here a structuring grid, there a spiking zigzag. In Untitled (D1620-2017-10) bold pencil strokes laid in a basket-weave pattern hold down the lower register of the drawing, while ghostly frottaged circles float above. Guérin produces patterns not only through relief rubbings but also through hand drawing, and it can be tricky to determine which components she made by which method.

Guérin’s means in the paintings are even more ambiguous. Here, it is especially difficult to distinguish between brushstrokes and marks that she apparently produced through a type of stamping, rubbing, or scraping. Two relatively deep trenches bearing the imprints of rope fibers cut through the upper and lower sections of one untitled painting. How has Guérin coaxed her oil paint to behave like wet plaster? The technique behind the thin ridges that course through this and other paintings is likewise perplexing: has she produced them by placing objects on the canvas and building up lips of gesso and paint around them?

Guérin’s paintings are not characterized by “superflatness,” despite the claims of the press release. (Perhaps the gallery is attempting to cash in on the Museum of Contemporary Art Chicago’s recent Murakami blockbuster.) She achieves something rather more disorienting: attempts to enter her compositions optically will leave one feeling dumped out, as if through a fun-house chute. Her works jettison the pictorial order of background and foreground, as many pure abstractions do. Moreover, they thwart the viewer’s efforts to understand the chronology of their strata—to know which thing precedes another. It is unclear, for instance, whether a low-relief grid of tiny squares found in one painting is subcutaneous or was produced by pressing into the top layer of wet paint. As if to further compound the viewer’s doubt about the nature of the paintings, Guérin adulterates her oils with copious amounts of white, tempering their luminescence and giving them the quality of colored paste. Her saltwater taffy palette of sea greens, cloudy lavenders, sherbet oranges, and putty yellows lure the viewer, but the vexingly indefinite space produced through her material manipulations is the hook.