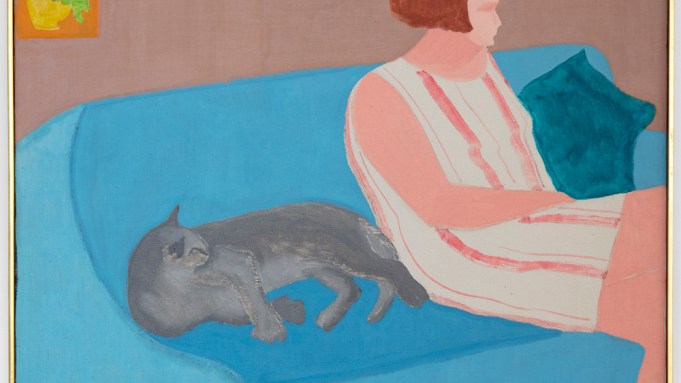 March Avery was born in New York City in 1932 to painters Milton and Sally Michel Avery. She began taking lessons from her famous father as a child and had her first solo exhibition in 1963. Like her parents, she favors asymmetrical compositions featuring simplified forms painted in unmodulated hues, but she distinguishes herself through her relatively saturated palette and graphic sensibility.

Blum & Poe’s recent exhibition of Avery’s work brought together portraits, domestic scenes, still lifes, and landscapes that she painted over the past five and a half decades. The 1963 canvas Philip Reading depicts a mustached man sprawled on his back on a sofa, reading a book he holds above him. Avery’s swift paint application—brushy swaths, flat stained expanses—and her off-kilter arrangement of forms give a sense of movement to the sedate moment she portrays. Standing Nude, also from 1963, is static in comparison and demonstrates an uncharacteristically minimalist approach. The painting features an umber-colored woman standing with her legs spread wide and arms behind her back, her body dividing the pink background into three distinct shapes.

Although busier, Avery’s more typical works do not include extraneous details. She organizes a handful of main elements in such a way as to create a dynamic image that nonetheless conveys an ordered, serene atmosphere. Frequently, she positions her subjects toward one edge of the canvas and incorporates a detail on the other side that serves as a counterbalance. In Sofa Companions (1967), a woman sporting an auburn bob and striped sundress sits near the composition’s right edge, a gray cat reclining beside her. While both the woman and the cat gaze at something beyond the frame, a small painting of a flower arrangement rendered in the canvas’s upper left corner draws the viewer’s attention back into the scene.

Card Players (1983), which might allude to Cézanne’s paintings on the same theme, is one of many works in which Avery places hues of similar value against each other so that they appear to vibrate. Here, she most effectively accomplishes this in the juxtaposition of the right-hand figure’s crimson dress and the background’s deep periwinkle, which, in turn, is laid atop hot pink underpainting that twinkles through. Ruth in a Sling Chair (1985) is a master class in green. A woman sits in a chair set against a rich chrome green background, her billowy pants painted in brushy washes of emerald and her top in chartreuse. The different shades of green interact with one another, and with the sitter’s light-blue skin tone, providing a striking example of how Avery uses color to animate the subjects in her portraits.

The art/life divide, one imagines, is especially narrow in a family of painters. Avery treats home life to an array of painterly techniques that imbue her scenes with wonder and excitement. Through a skillful approach to color and pattern, she creates a celebratory mood and turns the simplest moments into an artful experience.

This article appears under the title “March Avery” in the October 2019 issue, p. 87.