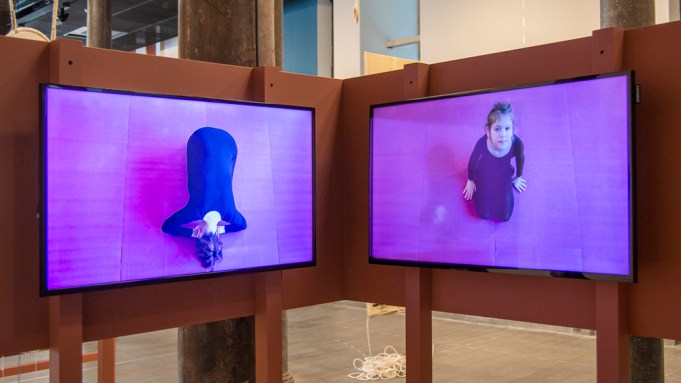 In this exhibition, Swedish artist Maria Andersson and Istanbul-based American artist Nancy Atakan explored the life and legacy of Turkish educator Selim Sırrı Tarcan. Tarcan introduced gymnastic training to Turkey after he visited the Royal Gymnastics Central Institute in Stockholm in 1905 and researched the method that its founder, Pehr Henrik Ling, created. Ling based his technique on ancient Greek principles and hoped that it could restore a lost unity between body and mind. Tarcan wanted something similar for Turks as they underwent the disorienting shift from the Ottoman Empire’s Islamic culture to the Republic of Turkey’s modernism in the early twentieth century. Andersson and Atakan’s research-based show—which was titled “Forward, March!” and included videos, drawings, textiles, and sound pieces—unearthed the agenda through which Tarcan and his two daughters sought to change the postures and physical movements of Turks through imported techniques.

Andersson’s The Traveler (2019) takes the form of an educational video on Tarcan’s discovery of a song written by the Swedish poet Gustaf Fröding, who disliked urbanization and idealized rustic society. Tarcan adapted this song, “Tre trallande jäntor” (Three Carolling Girls), to a Turkish context, turning it into a youth anthem with lyrics expressing a desire for physical activity and a return to nature. In The Traveler, Andersson identifies the song as a metonym of Turkey’s modernization, and conveys its enduring popularity in Turkey by incorporating footage of basketball fans in Istanbul singing it. In an artist’s book on view, Anthems (2015–19), Andersson delves into disturbing aspects of Tarcan’s cultural appropriations; during a period of rising nationalism, he not only turned Fröding’s song into a youth march but also translated Ling’s techniques into curriculum to be taught to public school students. These works serve to contextualize and subtly critique the ideology of public education and its enmeshment with nationalizing agendas.

Anthems also addresses Tarcan’s daughters, Selma and Azade—inspirational figures for Andersson and Atakan. The Tarcan sisters followed in their father’s footsteps, studying therapeutic gymnastics and choreography, but focused more on liberating aspects of Classical culture than on the disciplined, muscular qualities he highlighted. Selma was influenced by modern dance pioneer Isadora Duncan. Andersson’s video Echo (2019) comprises the only existing footage of Duncan dancing. In it, a tunic-draped Duncan twirls about at an outdoor recital, spreading her arms and waving them in the air. Duncan’s choreography, like Ling’s and Tarcan’s methodologies, was influenced by ancient Greek culture and by nature, and the brief but hypnotic video suggests that there were feminine potentials in a return to antiquity.

Atakan studied gymnastics under Azade Tarcan in the 1970s. The artist’s Passing On I (2015) is an edited version of an instructional video on Ling exercises that Azade recorded in the 1980s, and illustrates the way Tarcan’s ideas carried from one generation to the next. A related video, the two-channel Passing On II (2015), also focused on this legacy, showing a group of young girls and women, including Atakan, repeating four movements from the Azade tape and thereby bringing the history into the future.

The exhibition was presented like a sports event: basketball court–style markings on the gallery floor circled works and directed viewers’ movements. At the center was Atakan’s My Name Is Azade (2014), twenty-three pencil drawings illustrating Azade’s life. The sketches incorporated quotes from this unacknowledged pioneer of Turkey’s feminist history who, in one drawing, proclaims: MY FATHER NAMED ME AZADE BECAUSE IT MEANS FREEDOM.

This article appears under the title “Maria Andersson and Nancy Atakan” in the November 2019 issue, p. 109.