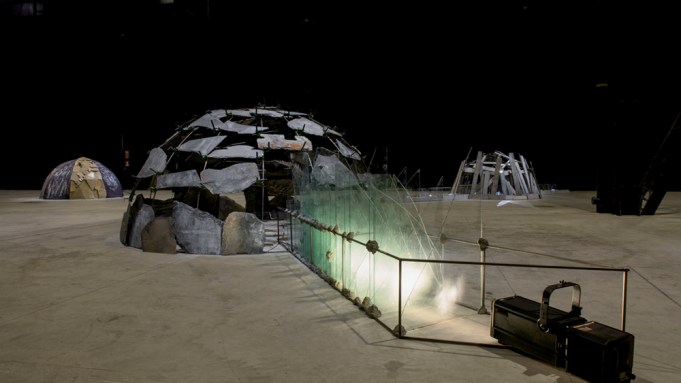 “Igloos” assembles thirty sculptures that Arte Povera stalwart Mario Merz produced between 1968 and the year he died, 2003. Installed as a “village” inside a vast hangar, this grouping casts the igloo, a dominant if variegated icon in Merz’s production, as a unit in a system. The discrete objects dissolve into a type, suggesting that meaning resides not in the igloos themselves but in their generic structure.

While the installation obliquely references the strictures and repetitiveness of village life, it more directly reflects architectural practices that flourished in Northern Italy in the late 1960s. I’m thinking here not just of inflatable domes and other structures that might somewhat resemble the igloos, but of much more radical proposals that investigated the standardization of architectural form. Projects like Aldo Rossi and Carlo Aymonino’s Monte Amiata housing complex in Milan revealed how the methods and aesthetics—and, above all, the homogenizing social effects—of mass production extended throughout the new urban infrastructure and into every corner of life.

This process often worked by encouraging surface customization. Residents in uniform apartment blocks could style their own interiors; office workers could place family photos and other personal effects on their identical desks. Merz’s “primitive” shelters are constructed with the detritus of industrial society, and his idiosyncratic materials—from glass shards and bags of flour to pieces of slate and painted canvas—emphasize surface difference. But this difference is invariably subsumed into a standardized program. Works such as the 1981 Architettura fondata dal tempo, architettura sfondata dal tempo (Time-Based Architecture, Time-Debased Architecture) take up Transavantgarde impulses of the 1970s and ’80s by disrupting high modernist taste and embracing mythic elements. But while Merz “updated” the igloos by incorporating emergent styles, adhering to the whim of the times, the formal paradigm remained unchanged, telling us much about the mechanisms of social control.

This diagnostic function imbues the igloos with pervasive pessimism. They track, on a symbolic plane, the troubling operative logic of postwar socioeconomic development, its activation by automation, cookie-cutter design, and information technology. This is why the one example of Merz’s famous neon number sequences included in the show, Numeri di Fibonacci (Fibonacci Numbers, 2002), arcing high over the igloos, does not draw an organic connection between rational decipherment and naturally occurring orders, as it is intended to do. Instead, it serves as a diagram of a thoroughly artificial world in which numbers have replaced narrative and rationalization has led to algorithmic governance. (In the 1960s, during the advent of Arte Povera, Marshall McLuhan was already proclaiming the world a “global village” knit together by communications media.)

Like the neon gases and electric currents Merz sometimes used to evoke vital invisible forces—labor, energy, thought—the Fibonacci sequence (in which
each number is the sum of the preceding two, an arrangement with many manifestations in nature) now reads as a prefiguration of the “invisibility” of digital links, the networks they structure, and the data that circulates through them. The igloos, displayed as a village and a system, signal the diminished
power of poetic and political agency in a world increasingly shaped by the mathematics of commerce and capital.