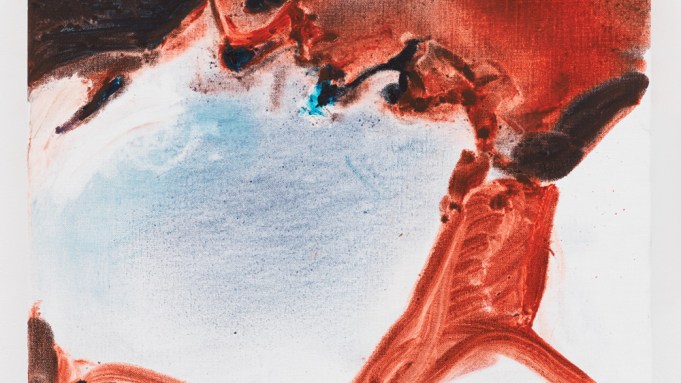 Marlene Dumas’s painting Drop (2018) is a close-up portrayal of a woman. Her skin has a faint blue tinge, and concentric rings surround her head, suggesting an aura or halo. Her vague resemblance to renderings of the Virgin Mary begs the question: is this one of the “myths” referred to in the exhibition title, “Myths & Mortals”? The show’s paintings (all oil on canvas) skirt the explicit depiction of actual gods or mythical personages. The bodies shown range from the offhand—even expressly uncouth—to the hieratic and ceremonial. Yet they all appear decidedly human, despite the occasional touch of otherworldliness.

In the large, vertical Spring (2017), a standing woman with her legs spread and underwear pulled down appears to douse her crotch with a bottle of alcohol. The treatment of her body is striking. While her right leg displays an unmodulated, almost cartoonlike flatness, her left leg—with which she seems about to step beyond the canvas’s bottom edge—bears a naturalistic, if rough, contouring. Even within a single figure, Dumas manages a range of touches and textures, keeping the eye unsettled as to how a body stands in pictorial space, between corpulence and mere form. The small painting Kissed (2018) presents the profile of a face oriented downward. Only gradually does the bluish-white negative space beneath it reveal itself to be the other visage engaged in the eponymous embrace. Here, the outlines delimiting bodies look coarse and clotted. Rather than separate forms, they serve to merge flesh.

Amends (2018) features a pale, naked male figure standing before a row of females, the latter represented by dark silhouettes of hairdos in the foreground. What might be a portrayal of a drawing class evokes—in the wake of the #MeToo movement and given the work’s title—a more dramatic scenario of a man exposed before women. That the powder blue of the wall behind him seems to have seeped into his outline suggests a kind of ambient sympathy between subject and space that is reminiscent of Matisse—an enduring font for Dumas’s work in general. Indeed, the common denominator of her varied paintings is her mesmerizing facility as a colorist. Frequently, she uses color to create compositions that are somehow both harmonious and dissonant, while refraining from the agitated brushwork that German Expressionists employed to that end.

Awkward (2018) shows two individuals turned toward each other, their hands clasped and feet atop each other in a pose conveying intimacy and shyness at once. With their schematic—and thus idealizable—faces and tumbling locks, they recall Classical figures, particularly in light of the pieces on display in the next room: thirty-three works on paper (all 2015–16)­ that Dumas made to illustrate an edition of Shakespeare’s narrative poem Venus & Adonis. If the images’ wispy ink washes conjure the fantasy of myth, some works, like Adonis Frowns, offer strikingly realistic visages, grounding myth in the mundane particularities of physiognomy.

Dumas has long thinned her oil paint with turpentine—frequently diluting saturated colors with it and occasionally swirling the mix in nacreous pools. The haze of Smoke (2018) and the inebriation of Intoxication (2018) invite an especially vaporous treatment, yet despite the paint’s dissipation, the figures’ faces emerge intact. Like the young painter Maya Bloch after her, Dumas uses the distortions of oil to distance her figures—who appear as if filtered through memory or a sense of alterity—and simultaneously to make tangible some peculiar aspect of their presence. If the show’s myths and mortals appeared interchangeable, that was perhaps the point; the Greco-Roman pantheon, for its part, inhabits emphatically human dimensions in myth and literature. Yet to ascribe an overall premise to the work here would be disingenuous. The sum of the exhibition fell short—its larger conceit failing to materialize—but its parts were frequently compelling and evidenced Dumas’s ability to evoke the grace and awkwardness of embodiment.