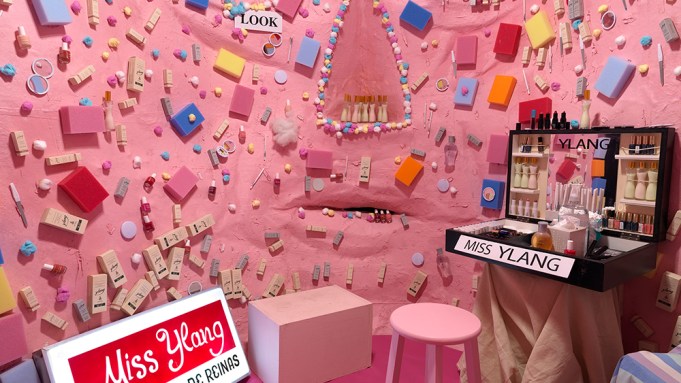 One of the first things you encounter in “Menesunda Reloaded,” the New Museum’s faithful re-creation of Argentine artist Marta Minujín’s pop-up fun-house installation La Menesunda (1965), is your own image on a black-and-white Zenith tube TV, transmitted by a vintage video camera pointed at you through a peephole. The strangeness of seeing yourself on an old TV must be the inverse of what attendees felt when the original installation opened for its two-week run in Buenos Aires. La Menesunda was one earliest artworks to use live video, and being able to see your own image on a screen then must have seemed like a small miracle. Now, of course, seeing ourselves on-screen is mundane, not a technological wonder but a dreary and compulsory aspect of everyday life.

This contrast is underscored by an addition to the reinstallation: a white digital surveillance camera mounted above and to the left of the TV. We don’t get to see how we look to that camera, nor do we know who does. We don’t know if the museum or the artist is storing that footage, compiling our faces for a database to train artificial intelligence. We don’t even know whether we should consider it part of the installation or part of the museum’s infrastructure.

Additional cameras—of the kind a homeowner might use to monitor a front door or Airbnb guests—are installed throughout “Menesunda Reloaded,” ostensibly for security purposes. But intentionally or not, they also served a thematic purpose. They enhanced the sense that the route through the installation’s opening rooms is choreographed to recalibrate our experience of watching and being watched. You pass by yourself on-screen, then circulate past some more TVs showing what looks to be conventional scripted Argentine programming from the 1960s, contextualizing your image on the monitor with what TV was like in Buenos Aires when La Menesunda debuted. After that, you are sent down a narrow staircase uncomfortably close to a cramped space set up as a tiny bedroom. There, two live actors lie in the bed together, performing intimate domesticity as if behind a fourth wall, chatting and flipping through magazines, seemingly oblivious to passersby. Then you are brought around again past the first camera that captures you, to rethink what it means to be put on display.

The route was the same in La Menesunda. But contemporary additions to “Menesunda Reloaded”—the surveillance cameras, as well as the phones many visitors take out to document their time in the installation—intensify the impression of being watched watching. I had my own phone out and was pointing it at all the other cameras. If nothing else, filtering my experience of the work through my phone kept me from being lulled into the project’s inherent nostalgia.

In 1965, the immersive environment’s amusement-park vibe might have seemed like a countercultural provocation, a rejection of the highbrow pose of detached contemplation and an embrace of interactive tactility. This attitude of the artist was more or less imposed on visitors, who had to navigate a series of narrow passages over unsteady terrain, on their feet and sometimes on their knees, just as visitors to the New Museum version must do today. (There are a series of advisory warnings posted at the museum’s front desk and outside the installation.) Minujín’s point was to compel visitors to have a “playful” experience. They were forced to plow through a room stuffed with hanging, sausage-like heavy bags. They climbed through a refrigerator door—a motif since borrowed by the art collective Meow Wolf for the massive House of Eternal Return installation in Santa Fe. And the journey ended in a room where one can spin around alone in a glass box as the lights go down and oscillating household fans blow confetti in the air. (This wasn’t working very well in the Reloaded version when I visited. The confetti sat in sad piles on the floor while black lights flashed.)

These environments seem quaint in their fairly low-rent implementation, a pointed contrast with the high-tech immersive spectacles museum goers might now expect. (Pipilotti Rist’s 2016 retrospective at the New Museum, with its ceiling-high video screens and its Instagrammable roomful of dangling LED lights, comes to mind.) The way Menesunda—a word that, the wall text explains, means “confused situation”— tries to disorient visitors with tactics borrowed from the commercial world evokes a time when the society of the spectacle was perceived as a threat, something that could still be staged ironically and critiqued rather than taken for granted, with any possible critique already assimilated.

The most salient thing about the installation is not how fun it is but how its “fun” is prepackaged. It has lots of rules. While waiting in line I had expected that “Menesunda Reloaded” would be open-ended and exploratory inside, like Meow Wolf’s spaces are. But when the guard granted me permission to enter, it became clear that the path is rigidly prescribed, more Ikea showroom than sandbox. When I tried to go down a staircase that was meant for going up, the guard entered the installation to chastise me. It was slightly unnerving, but it felt consistent with the forced interactions along the way, as with the woman who tried to make me smell perfume in a room festooned with sponges, compact mirrors, and bottles of nail polish. Were disobedience and admonishment part of the script? Were we all expected to go rogue at some point?

In 1965, there may have been some frisson in carrying out Menesunda’s faintly humiliating program: Yes, you can have your superficial sensory pleasures, but they come at a cost to your dignity! You are forced to enter the installation by yourself—the human-shaped doorway hammers that home—and the narrow passageways and staircases reinforce a single-file solitariness. No matter who you may have come with, you go into the consumer-capitalist sensorium alone.

That pseudo-individualist isolation may have seemed similar in the ’60s to what consumerism was just beginning to offer as an alternative to the generic mass-produced goods of the then-recent past. Perhaps Minujín was offering a warning: You have to surrender solidarity to walk the narcissistic path of the spectacle. You could choose what to watch on your own personal television, and you might even appear on one someday, but that won’t make you free or important. You can’t consume your way out of complicity.

Contemporary surveillance has rearranged that concern. People are increasingly aware of how they are atomized into social media profiles and singled out by targeted advertising. They are less likely to be tempted by a promised escape from a standardized reality as they are to be wistful over the loss of mass culture and the “shared experiences” that characterized it. “Menesunda Reloaded” evokes not the dangerous seductions of consumer culture so much as the era when that culture was relatively clumsy and unsophisticated in its lures. The problem is no longer that our individuality will go undeveloped or unrecognized, or that pursuing individualism will infantilize us or alienate us from social belonging. It’s that, under continual surveillance, who we are as individuals is elaborated against our will as a collection of data points we can’t escape from any more than we can disavow our own face.

When you exit “Menesunda Reloaded,” you find yourself across the hall from an unmarked gallery in which a short newsreel-style documentary about the original Menesunda plays on loop. It seems an afterthought, but it reconfigured the whole experience for me. I compared my brief wait in a dim gallery alcove to the long line of mostly well-dressed patrons extending through a museum and out into a Buenos Aires street. I reimagined my trek through the installation as a bemusing and surprising confrontation with the cutting edge of 1960s youth culture. I saw the visitors shrugging and smirking at the camera, and I fantasized that I too might come across that way in any footage taken of me in public, comfortably aloof and faintly flattered, as if it were only ever shot for publicity.