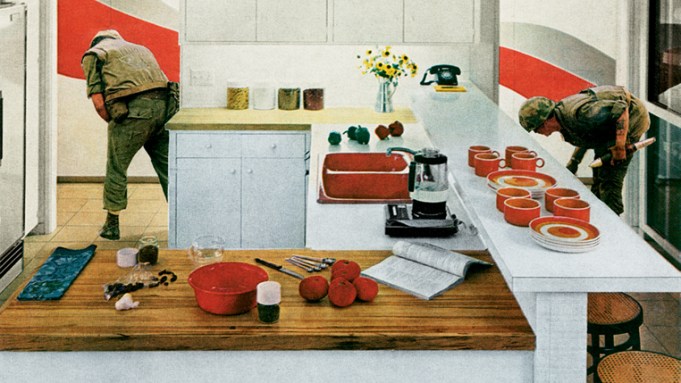 ALTHOUGH “IRRESPECTIVE” IS a remarkably fresh, thoughtfully curated overview of Martha Rosler’s art from the past fifty years, it does not aspire to be exhaustive. The exhibition features around seventy works, with not a single extraneous piece. Still, there is a wide selection, spanning from collages Rosler created in the late 1960s and early ’70s, when she was in graduate school at the University of California, San Diego, to a recent film about the Trump administration. Her long, productive career makes it difficult to categorize her practice. Conceptualism, feminism, appropriation, and relational aesthetics convey aspects of what she does, but none of these terms seems fully apposite. They leave something out, pigeonholing her into rubrics that simplify her concerns. As a kind of recourse, some commentators use the generalized label of “political” to describe Rosler’s approach. Politics is a thread that runs through everything the artist does; it is the baseline from which any activity commences. The diverse range of work in “Irrespective,” which viewers encounter in galleries filled with the background audio-wash of her videos, makes it clear that what really underlies her art is actually a kind of moral erudition.

At the most basic level “Irrespective” is about power and its impact on individual agency, and almost all the works on view examine how power operates through representational systems. The black-and-white video Semiotics of the Kitchen (1975) and the twenty-four-panel text-and-image work The Bowery in two inadequate descriptive systems (1974) testify to the gaps between signifiers and signifieds. The Bowery, with its pairings of black-and-white photographs of depopulated storefronts with carefully arranged words that characterize states of inebriation, seems tame today, a classic example of Conceptual art and a clever critique of the documentary photography tradition. Semiotics of the Kitchen, however, is frightening as ever. Rosler stands behind a low counter in a kitchen that looks like the set of a televised cooking show. Before her is an assortment of pots, bowls, and culinary implements. After a short silence, she announces “apron” while tying the garment’s strings around her waist. She continues by lifting a bowl and naming the object. Her flat, disengaged manner of delivery is disconcerting. She continues through the alphabet: grater . . . ladle . . . nutcracker . . . spoon. It likely takes many viewers a while to catch on to the work’s structural logic, in part because there are uncomfortable instances in Rosler’s progression when she “misuses” an object, slashing with a large knife or stabbing with an ice pick. The piece brims with violence and anger, which appears to be held in check only by the representational forces that bind female identity to domestic labor. At its core, Semiotics of the Kitchen raises the question of whether authentic free will can be exercised within the confines of traditional gender roles. The answer is hardly affirming.

Deterministic malaise runs through other videos in which Rosler performs, like Vital Statistics of a Citizen, Simply Obtained (1977), Martha Rosler Reads Vogue: wishing, dreaming, winning, spending (1982), and Born to Be Sold: Martha Rosler Reads the Strange Case of Baby $/M (1988). In these works, such culturally assured structures as science, the fashion industry, and childbirth come under Rosler’s withering scrutiny. Her aim is guided by the way patriarchy insinuates itself into all levels of society, how a woman’s body is reducible to measurements, consumer fantasy, and legal contracts. Yet the subject of Rosler’s critique in her videos can be ambiguous, just as it is in collages like the series “House Beautiful: Bringing the War Home” (ca. 1967–72) and “House Beautiful: Bringing the War Home, New Series” (2003, 2004, 2008), both of which juxtapose clippings from lifestyle and interior design magazines with horrific images from American wars abroad. Rosler never really accuses any individual agent in her work, with the exception of Point & Shoot, a mourning thought (though I am more outraged than in mourning), 2016, a text-and-image collage that links Trump’s violent rhetoric to police violence against people of color. Usually, Rosler instead unravels the various symbolic orders that govern human interaction to expose the power dynamics within these systems. This is what makes her work essential: she obsessively states in piece after piece how the root of oppression exists in the mechanisms used to produce meaning.

These themes continue in her explorations into class and consumerism. Rosler’s Marxism comes across as a do-it-yourself Society of the Spectacle, humbler and more local than Debord’s, less caught up in dramatic proclamations and theoretical pyrotechnics. Her expression of class consciousness is matter-of-fact, appearing in works that deal with the production, consumption, and politics of food, as well as projects that explore the intersection between real estate, identity, and public spaces. The three-channel video installation Global Taste: A Meal in Three Courses (1985/2014) offers an essay on the Americanization of dining around the world, with corporate fast-food and soft-drink marketing campaigns leading the way. On occasion, Rosler’s work can be frustratingly literal, like the ongoing photo series “Air Fare,” which documents the meals served to her on flights. It lacks the poetic melancholy of Prototype (God Bless America), 2006, a short video that shows a maimed toy soldier belting out Irving Berlin’s patriotic hymn. Not that reportage can’t be affecting. Greenpoint Project (2011) is a photographic installation that movingly details the gentrification of the Brooklyn neighborhood. It comprises shots of storefronts and transcriptions of interviews Rosler conducted with shop owners and employees—a humane examination of a changing community without the sense of doom found in her earlier videos.

The cohesion of “Irrespective” uncovers a powerful paradox in Rosler’s art. Visually, her work is often rooted in the moment of its creation, bound by the physical limits of her technological apparatuses. Her early videos, for example, look decidedly of the 1970s and ’80s, which can have the unintended effect of making such work “dated,” as if they are now mere illustrations of an art historical moment. But the urgency of her subjects—gender, patriarchy, class struggle, war, to name just a few—are still incredibly germane and perhaps, sadly, timeless. Much of this relevance is emphasized in an underappreciated aspect of Rosler’s art: her prose, and especially the hypnotic manner in which she performs it in her videos. The way she poses questions, uses lists, or discordantly pairs words with images is enthralling. Her voice is distinctive—detached yet emotive—and her pacing and occasional speeding up of phrases constantly grabs the viewer’s attention. Rosler does not prioritize language over the visual or vice versa. They are distinct representational systems united in her art. She knows they are incommensurable, but in their differences, her art becomes whole and makes evident that few artists working today are as significant as she.