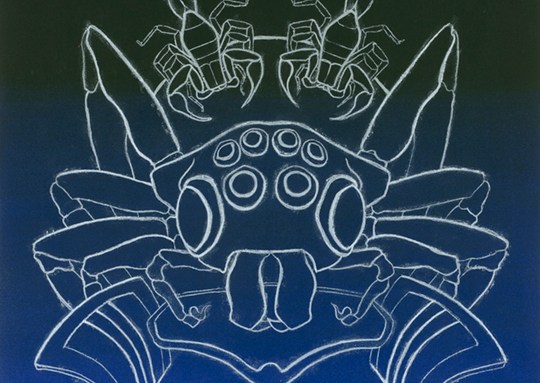 In “Art, AIDS, SF: Tales of the City,” an essay looking back on San Francisco in the early 1990s, local art critic Glen Helfand writes of “a city on fire with the urgency of grappling with mortal coils, and with the erotic power of seizing a moment as if it were your last.” Helfand goes on to provide an autobiographical overview of the intertwined, community-based strains of creative protest and cathartic release that arose out of this moment, much of it antagonistic to both the art world and the demands of street-level activism. Although certain touchstones that Helfand mentions—Rick Jacobsen’s short-lived but highly influential Kiki Gallery; the catalytic personages of Nayland Blake and the late Jerome Caja; the rise of Queer Nation and other agitprop collectives alongside a reenergized underground club scene—have received broad recognition, a fuller history of this era and the various players involved is only recently beginning to emerge.

“With(out) With(in) the very moment,” on view in the San Francisco Arts Commission’s main galleries through June 22, brings together a group of eight Bay Area artists whose lives and practices were indelibly marked by the period Helfand details. But the exhibition can’t really be described as a retrospective about this era, even if it has one eye on the past. Crucially, with the exception of the late Ed Aulerich-Sugai, guest curator Margaret Tedesco chose to present local artists who are still alive and creating new work. The artists, most of whom started working in the early ’90s, are all well established in the Bay Area, though not all have received the institutional recognition they deserve. The recent work gathered here makes the case for getting reacquainted with them. While it doesn’t crackle with the fierce urgency Helfand describes, the quieter, more reflective registers on display demonstrate that witnessing can take many forms. The works are less statements of protest than personal talismans created in the wake of trauma.

The exhibition centers on the work of Aulerich-Sugai, who came of age as an artist and a gay man in San Francisco amid the heady days of gay liberation. Although he had maintained an active painting and drawing practice since earning his BA from the San Francisco Art Institute in 1975, Aulerich-Sugai entered into an intensely prolific period of creation that began after he was diagnosed as HIV-positive in 1987 and lasted until his death in 1994. During this period, he frequently mobilized Japanese iconography and mythology to evoke the battle taking place inside his body while also invoking protection from it. Hanging on a wall in the show are two works from his 1989 series “Ghosts and Demons,” one depicting the face of the mythological warrior Shoki and the other that of a fierce demon. The faces are outlined in fine white chalk on hand-colored paper that displays brilliant ombre patterns, the results resembling kites. A work from a related series, Power in Storage: Samurai Helmet #23 (1990), renders the titular helmet as an arrangement of insects and scorpions outlined in chalk on a blue-black background.

Cliff Hengst’s large hanging scroll Your Consciousness Goes Bip, which was commissioned for this exhibition, echoes Aulerich-Sugai’s work in both format and materials, similarly employing watercolor, ink, acrylic, and chalk. Following the scroll’s vertical flow, Hengst painted a waterfall with koanlike statements by philosopher Alan Watts tumbling down its surface. Hengst frequently works with borrowed text, transforming the weight and force of individual sentences through their graphic isolation. (Another group of his paintings, arranged on the floor of the gallery like a pile of records, employs text from former FBI director James Comey’s recently published memoir.) Here, Watts’s words (“Wow is today,” “Where’s me?”) are rendered as a torrent under which one can perhaps find release—as in the Shinto purification practice of misogi—or risk being overwhelmed by too many conflicting demands.

More affecting is Taste the Feeling (2018), an erasure diptych that Hengst created from two Coca-Cola advertisements taken from bus stops around San Francisco. Hengst carefully applies Black Magic ink so as to isolate the model’s hands, as graceful as those in an Ingres painting, so that they appear to float, suspended against an imperfectly dark backdrop. On the left a single arm hangs limply, evoking that of a corpse, while the pair on the right is held aloft, clutching some now-absent object.

The use of found materials is a common thread through the exhibition. Nancer LeMoins’s portraits of homeless women silk-screened on the soles of used shoes offer a tender accounting of a segment of the Bay Area’s increasing population of the unhoused that is often overlooked. Mark Paron’s sculptures, made from PVC, plastic, wire, and other industrial materials, are by contrast, fantastically abstract. Cinderella Flees (2004), for example, contorts Mylar window tint around a wooden base into something resembling a column of liquid mercury. Other works take assemblage into uncannier territory. Elliot Anderson’s two ghostly digital Duratrans prints from the 2016 series “Average Chandeliers”—images of chandeliers composited from the search results of various e-commerce sites and mounted on light boxes—are at once send-ups of aspirational consumerism and monuments to past incarnations of camp as queer sensibility. In contrast, Mark M. Garrett’s three intricate cut-map and gouache collages from 2015 to 2017 are analogues for a more intimate, psychological experience of the surrounding world, in which once stable geographic markers dissolve like threads of cotton candy. Some (dark) comic relief is provided by Adam J. Ansell’s latex-on-wood portraits depicting a rogue’s gallery of outlandishly outfitted characters. Rendered in rough strokes, they look like a police lineup of extras from a John Waters film.

As a presentation of local artists who have perhaps flown under the radar—or, as in the case of Aulerich-Sugai, whose work was not recognized in their lifetimes—“With(out) With(in)” is a thoughtful cross-section of “local” and “contemporary,” as well as something of a corrective to the historic record. However, the exhibition doesn’t overtly place these artists within the larger historical context it cites as a point of shared experience between them. That context is summed up in a vitrine, placed in the corner of the gallery, filled with tantalizing ephemera from the late ’80s and early ’90s: a calling card from filmmaker Gregg Araki; a limited-edition putto-shaped soap created by General Idea; COLORS magazine’s 1994 AIDS issue; the chapbook published by Kiki on the occasion of their “Sick Joke” group show on AIDS and black humor. Since the show does not provide much information about the participating artists’ biographies, or their respective and collective histories in the Bay Area, their ties to the zeitgeist evoked by this time capsule’s contents remain implicit.

That this history isn’t spelled out explicitly does not invalidate Tedesco’s curatorial approach, which emphasizes the works’ shared emotional tenor while delighting in the clash of their different aesthetics. As Anton Stuebner—who is at least a generation younger than the other participating artists—reminds us in his contribution to the exhibition, an editioned publication titled You Are Not Alone, AIDS is not over. “I cannot imagine a post-HIV reality,” Stuebner writes, “perhaps because I never knew a world before AIDS.” As the fight has moved to different fronts and now requires different strategies, it is important not to romanticize the past in the process of remembering it. Nostalgia also risks overlooking those who are still with us. “With(out) With(in)” shows just how tricky a needle the history of AIDS, art, and activism can be for any exhibition to thread, but it also demonstrates the necessity of trying.