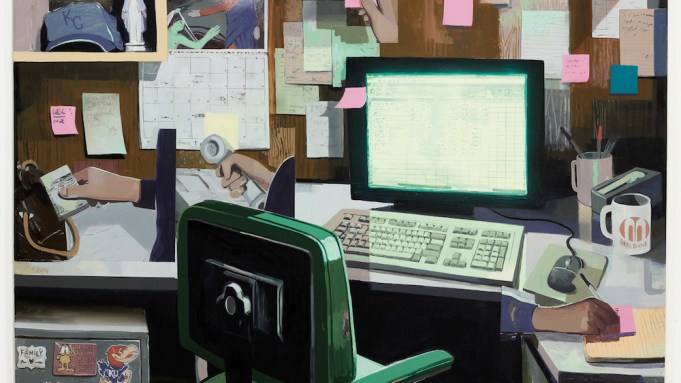 The thirteen new paintings in Matt Bollinger’s recent exhibition, “Between the Days,” play multiple roles. First, they serve as static vignettes portraying the lives and personal belongings of a mother and son in suburban Missouri. Scale and perspective shift from an immersive 7½-foot-wide living room vista to a twelve-inch portrayal of the son sitting alone at a picnic table. Moving around the gallery, you felt like a camera was zooming in and out from one picture to the next, and that impression turned out to be justified: the paintings were the building blocks for an eighteen-minute stop-motion animation that was on view in an adjoining room, the artist having repainted various components on the canvases hundreds of times and photographed each progressive state to create the scenes in the video.

In the animation, then, the canvases depart from their traditional role as images frozen in perpetuity and become narrative sequences. In doing so, they satisfy a desire that traces back to the work of Edward Hopper and other painters known for depicting melancholy scenes that leave us guessing as to what happened before or after the moments captured. Bollinger generously offers up that missing action in the animation, showing how people, objects, and light move through space and how paint, specifically, can move them. Remarkably, he does this without giving away too much and destroying the mystery that keeps paintings and stories alive. The trick may be that his challenge to the medium is equal parts celebration. How far can painting go and still be inherently itself?

In the late 1980s, William Kentridge began using stop-motion animation to bring the drawing medium into an expanded field. Applying the technique to charcoal compositions that he would obsessively erase and rework, he created films in which the physical residue of mark-making echoes the residue of history. Bollinger similarly massages painting’s limitations into strengths, delivering his story through lovingly layered brushstrokes, chunky buildup, and translucent washes. The images constantly shape- and color-shift on-screen, due to the inevitable formal variations that arise in his process of continually repainting the subjects by hand.

Most of the actions represented—opening doors, lifting weights, lighting cigarettes—are also carried out by hand and repeated continually. Here, as with Kentridge, form and content align. Frequently, Bollinger’s paintings resist narrative or spatial logic for something more improvisational: the sexy turquoise triangle at the upper right of the painting Credits Roll, for instance, is a subtle burst of fantasy. Mysterious squares amid the various paintings’ compositions (presumably a by-product of the process of revising the images for the moving sequences) disrupt pictorial order with slightly misaligned information, like pixels out of place. In the animation, labels on cigarette packs, envelopes, and beer cans appear after the objects themselves, disrupting the temporal order and injecting magic into the ordinary.

One wonders, however, whether the work’s constant variation and magic misrepresent the everyday tedium of the lives he portrays. Does form here elevate or exploit its subject? There’s a risk of producing “ruin porn” in making lives of quiet desperation look so great. But Bollinger does the opposite: he cultivates what can be called “radical empathy” for a suburban man and woman whose daily cycles of work, leisure, exercise, and sleep appear to leave them alienated from personal fulfillment and from each other. Like Monet tracking light across haystacks in painting after painting, Bollinger infuses monotony with perpetual transformation, offering a sliver of hope to anyone afflicted with the despair of routine.

The 25 Best True-Crime Podcasts of All Time