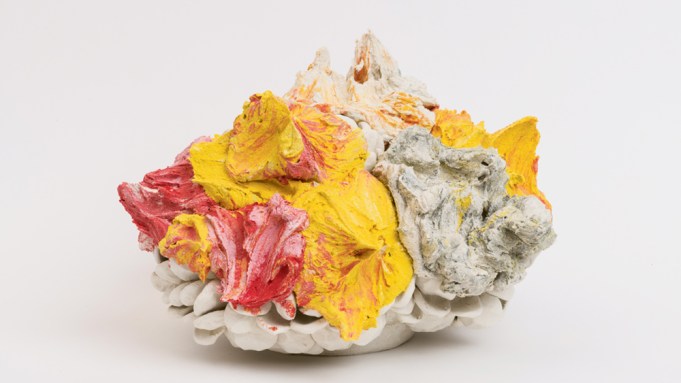 Ohio-based sculptor Matt Wedel operates on the principle of both/and rather than either/or. Joining forms typically considered disparate—flowers and rocks, humans and animals—his work radiates an ethos of interconnectedness. His latest show declared as much in its title: “Everything is everything.” In most of the thirty-five works on view, sculpture and painting converged—not a new development in the broad scheme of art history, but rarer in the realm of ceramics, Wedel’s medium.

His pedestal-mounted “Flower tree” pieces vary in size (ranging from six to sixteen inches tall) and level of exuberance, but largely adhere to a single, basic format: a blossom of white petals serves as base, vessel, and neutral canvas for a slathering of color. All is porcelain, but in radically different manifestations. The petals are modeled by hand—regular, smooth, repeated shapes in the clay’s naked state. The color-suffused clay resting atop appears suspended in a fluid, frothy condition, lathered like thick paint upon the fixed form. Each sculpture stages an encounter between solid and soft, order and improvisation. In one of the smaller examples, a tempestuous heap of grainy tar-black clay all but smothers the tender, upturned lobes. Another, similar in size, reverses the chromatic equation, its petals a Prussian blue overcome with thick white batter. On up to the largest of the pieces, humble containment meets flamboyant liberation. Impasto crusts of lipstick red, sunny yellow, aqua, khaki, coral, and myriad streaky blends messily adorn the modest blooms.

Wedel approaches his “Portrait” series in a similar fashion, using a simplified, standard shape as a carrier for lavish gestures in pigmented porcelain. Here, the shape, recalling a wig display form, is that of a head devoid of facial features and tapering only slightly as it descends into the neck. What distinguishes one of these works from another is the frosted, swiped, and smeared surface, different in palette and mood from head to head, here an uplift of cherry, there a downward streak of gold. Wedel allies hue with motion and in his loose, energetic sketching with the colored porcelain invokes the ever-shifting dynamism of personhood.

An ecstatic celebration of nature coursed through the show, even where Wedel withheld color entirely. Two large-scale, raw-porcelain “Flower trees” of a very different sort from the aforementioned ones—the artist has used this title for a variety of works over the course of many years—comprise loopy, tubular branches rising out of the bases of two stelae and ending in dense pompoms of petals. The trees, rendered in high relief, read as floppy arabesques, an enthusiastic sort of architectural ornamentation with the dappled texture of handwork still in process. A third stela, this one glazed ceramic, sports a magnificent lemon tree whose prolific fruits hang like so many succulent breasts, the protruding nipples of their blossom ends pointing in all directions. A milky icing drips equally over jade branches, yellow fruit, and white background wall. The sensual ripeness is palpable. The stelae extrapolate buoyantly on the espalier, and also recall the “Backs,” four reliefs that Matisse made of a standing woman viewed from behind. Wedel channels not just Matisse’s general form but also the spirit within his method of sculpting. “Everything must be constructed,” Matisse wrote, “built up of parts that make a unit; a tree like a human body, a human body like a cathedral.” Everything is everything.