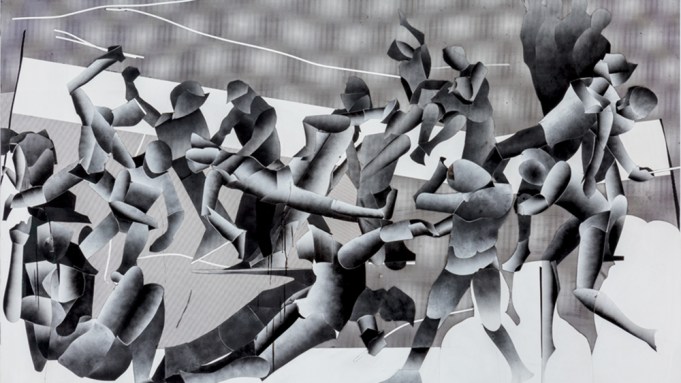 Monahan has long created sculptures that suggest fragments of ancient, mainly Greco-Roman statues. His typically battered- and abject-looking figures convey an eerie mood as well as an unexpected elegance. The meditative quietude they can inspire stems from the great distances of time they imply as would-be relics of a long-lost civilization. To produce these figures, Monahan has used myriad sculptural materials (wax, plaster, bronze) and often incorporated photographic imagery. The new examples are made of white-painted, resin-coated polyurethane foam that resembles marble and thus intensifies the impression of antiquity.

The figures in The Moon Ladder and Bad Actors appear to be emerging from or partly stuck inside the aluminum boxes, as they stand on the roofs with severed legs. In the rest of the sculptures, the figures are entirely enclosed in the boxes, which evoke cages more than vitrines. The three largest, most riveting examples were grouped in the street-level rear gallery. The ten-foot-tall Sidekick and Me, the most imposing of the three, features a composite of two figures, the head and torso of one appearing to merge with or protrude from the chest of the other. As the viewer moves around the sculpture, the mesh walls produce a moiré effect, and at times create the illusion that the raised arms seen through them might be flailing and one of the legs kicking.

Monahan uses this optical device to even greater effect in another sculpture in the trio, Ghost Box (How Not to Panic When You’re Made into a Ghost), in which two oversize bifurcated figures are grafted together in a sort of embrace. The eye sockets of one are covered with pieces of paper silkscreened with a black-and-white polka-dot design that matches the pattern of the box’s perforations. Passing by, the viewer finds that the figure’s eyes, due to the moiré quality, appear to flash in an uncanny way.

The paintings on view involved an unorthodox process. For each, Monahan applied a thin layer of adhesive vinyl to an aluminum panel. To create the composition, he cut away small sections of the vinyl, spray-painting the exposed areas of aluminum in black, white, and gray as he went. The final images suggest collages made of bits of shiny metal. Young Meme (after Petrus Christus) is a highly stylized bust-length portrait—a version, it seems, of the Early Netherlandish painter’s Portrait of a Young Girl (ca. 1465–70). More elaborate and ambitious works, such as Cyclone (Unlawful Assembly), Drone v. Stone, and Rolling 20 Deep, 20 Knives, depict multiple figures in what appear to be battlefields or street riots, the compositions conveying a sense of frantic movement, if not lethal violence. The sleek, modulated forms of Monahan’s painted figures resemble those of Machine Age modernism, especially Italian Futurism. Monahan, who spent considerable time in Italy leading up to his 2016 exhibition at the Palazzo Altemps in Rome, has apparently absorbed the inconography of Futurists like Giacomo Balla, Gino Severini, and Fortunato Depero. He transforms art historical aesthetics to suit his idiosyncratic vision, however, pushing them into decidedly contemporary terrain.