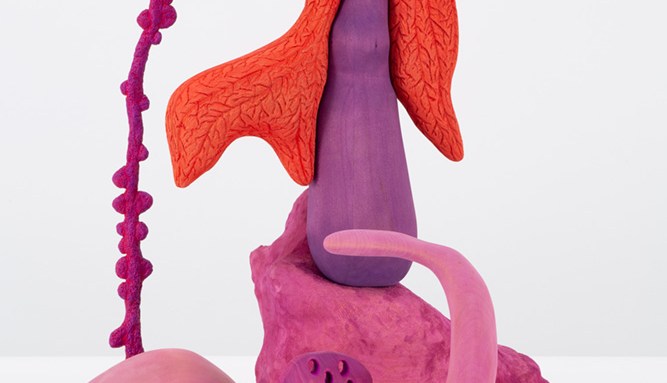 “Betrayals of and by the Body” was the especially fitting title of Matthew Ronay’s exhibition, which comprised fifteen sculptures from 2018 whose components—all hand-carved from soft, pliant basswood and stained in bright, sometimes garish colors—suggest peculiar versions of human organs or other body parts. The sculptures initially recall children’s toys (and in fact ten were displayed on a roughly ankle-height platform that seemed to position them for optimal viewing by kids), but Ronay’s biological iconography can be relatively adult-oriented. Often veering from abject to overtly sexual, the works evoke the sensuous forms favored by modernist sculptors like Jean Arp and Constantin Brancusi, Surrealist painters including Yves Tanguy and Toyen, and more recent abstractionists, such as Ken Price and Saint Clair Cemin.

The central elements in Flexed Poised Breached Swollen seem to be engaged in a sexual encounter. A purple phallus stands erect atop a swollen, tongue-like thing, penetrating a vermilion starfish blob. The work, despite its colorful, cartoonish quality, is rather uncanny, more disturbing than playful. Organism Refractor, meanwhile, suggests a zany take on something one might find in a medical setting. An orange-colored heart with seven severed ventricles revealing linings of red, blue, yellow, and green rests atop an umbrella-shaped network of red rods, which connect it to an arrangement of blue pipes that suggest mechanical pumps keeping it alive.

Ronay, who was born in Kentucky in 1976 and now lives in New York, has long demonstrated a fascination with ritual and talismanic objects in his sculptures, installations, and drawings. Meticulously crafted and nearly manically refined, the works in this show occasionally spoke to this preoccupation. Some suggested a meditative function, such as Attuned Unmade, in which a turquoise totemlike element rises from a dark blue base, with a limb of sorts stretching out from its side and connecting to a slender orange staff. Resembling a psychedelic version of a scholar’s rock, the work conveys at least some of the metaphysical and transcendental attributes that the ancient Chinese assigned to those sacred, weather-beaten stones.

Quite a few pieces evoked underwater scenes inhabited by strange species of flora and fauna. In Ovulated Anaphora, hot pink, orange, and magenta tentacles that might belong to a new variety of sea anemone embrace a golden egg—possibly the creature’s future offspring or its next meal. Throughout the show, organic forms seemed to thrive in a fragile ecosystem born of Ronay’s fertile imagination.

This article appears under the title “Matthew Ronay” in the October 2019 issue, p. 84.

World Cup 2022 Live Stream: How to Watch the Soccer Tournament Online for Free