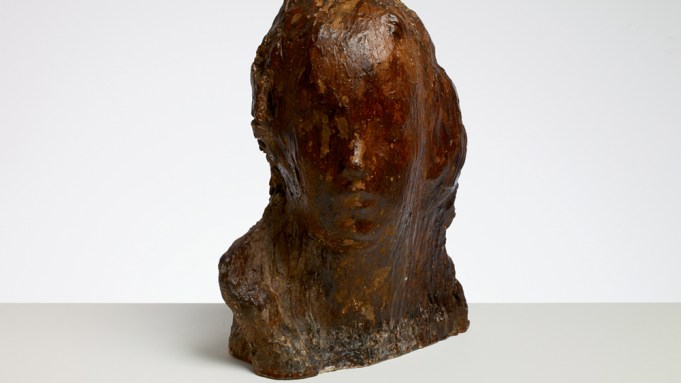 While Tate Britain presented the rather bloated blockbuster “Impressionists in London,” a much smaller show across town at Thaddaeus Ropac examined the same theme in nuce, by way of one of the twentieth century’s most innovative modernist sculptors. If the medium of sculpture seems inimical to Impressionism’s atmospheric effects, Medardo Rosso brought the two inexorably together, exploring the theme of bodies bound up with their environment and subject to the vagaries of light and time. Co-curated by Sharon Hecker, one of the world’s authorities on Rosso (and author of a new monograph on his work), and Ropac’s Julia Peyton-Jones, the show was the first to focus on his relationship to London, fleshing it out through drawings, letters, photographs, and a representative assembly of his most important sculptures. The artist—who was born in Turin in 1858 and relocated to Paris in his early thirties—traveled to London in 1896 and again (when he had a retrospective at the Eugene Cremetti Gallery) twenty years later, earning both British patrons and the attention of various critics. Hecker convincingly argues in the catalogue that the city inspired some of his most celebrated pieces, as well as the innovative ways he staged his sculptures and disseminated them through photography.

While developing his work in Paris, Rosso not only influenced Rodin (which the French artist was loath to acknowledge) but also drew on contemporary notions of realism. “Fewer Madonnas and more women in art!” Rosso declares in a short text translated for the catalogue. His representations of poor, ill, and elderly individuals distanced his work from the idealizing imperatives that had historically informed sculpture. His interest in marginalized subjects was of a piece with the coarseness of his style: his figures come into focus yet always seem on the verge of dissipating again.

Many of the drawings Rosso made in London—from sketches of the Royal Docks, café life, and a tube station to a graphite rendering of Trafalgar Square in which Nelson’s Column is barely discernible amid a patchwork of shadows—lend context to his conception of sculpture as a suspension of a seemingly fleeting instant. That conception is epitomized in Impression de Boulevard: Femme à la voilette (Impression of a Boulevard: Woman with a Veil, 1895). The wax sculpture seems to show a fashionable bourgeoise raising a veil above her head, though, as she is depicted with only the most rudimentary of arms, we can only guess at this. The veil itself merges with the top of her head as well as the surrounding space. Indeed, it proves impossible to differentiate the figure from the boulevard along which she strolls—an “impression” of both time and place that, like the woman’s face, blurs into an anonymity profound in its ordinariness. The body’s frontal orientation betrays a certain painterly sensibility on Rosso’s behalf, as does the plaster support that props up the wax from behind, much like stretcher bars behind canvas. Ecce Puer (Behold the Child, 1906), made of plaster coated in sealant, reveals a young boy whose face appears as if seen from through a veil of light or haze. Among Rosso’s most noted works, it also proved to be his last original sculpture (he would subsequently only recast earlier ones), and he completed it in London.

While Rosso employed a range of materials and techniques in his work, his subject matter remained focused on the nexus between figures and their ambient space. The Futurist artist and theorist Umberto Boccioni lionized the sculptor for his pioneering evocations of urban themes and aesthetic unfinish. Rosso has had an impact on numerous contemporary artists as well, including British sculptor Tony Cragg, one of whose works punctuated the exhibition. In the catalogue, Cragg proclaims that Rosso, a master of transience, “open[ed] the door more than anybody else” in terms of expanding figural representation.