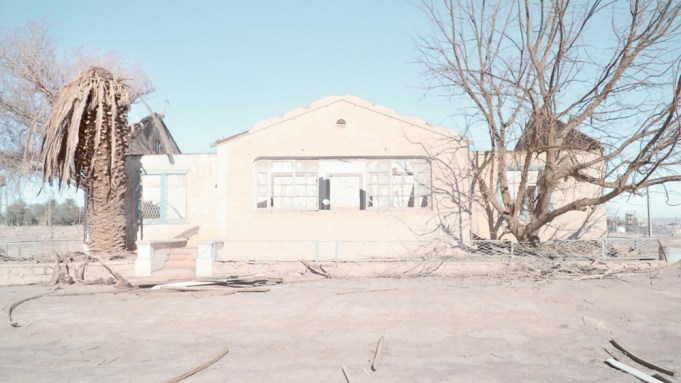 British-born, Mexico City–based artist Melanie Smith’s latest body of work centers on María Elena—a town of around six thousand inhabitants in the middle of Chile’s Atacama Desert that was founded in 1926 by the Guggenheim brothers to mine saltpeter and that today is home to the only remaining sodium nitrate mine in the world. María Elena was designed as an ideal city, albeit one on flat, featureless terrain around four thousand feet above sea level where scarcely anything grows. Smith’s show at Peter Kilchmann presented a twenty-four-minute video giving a fragmented view of the town and its daily goings-on, as well as eleven related paintings.

The video, María Elena, combines various filming techniques: panning sequences and fixed camera shots; aerial views (of putty-white terrain, of geometrically arranged mounds of powdery minerals or drying beds, the latter acid yellow and lime green) and closely framed details (an ear, a llama’s matted back, old shoes). We see mining processes, with tracts of land laced with charges exploding and heaps of white material being generated. We see machines, but rarely their operators. Flies move on the surface of water, stars hang in the sky, all accompanied by a soundtrack of ambient noises such as walkie-talkie conversations, plane-engine humming, and instrument beeping. An enigmatic figure draped from head to foot in a reflective metallic cloth appears three times, unsettling the viewer.

It is interesting to compare this work with Turkish artist Ali Kazma’s video Mine (2017), which focuses on the abandoned remains of another Atacama mine, one that, after it had ceased operations, was used as a concentration camp under Pinochet’s regime. Smith’s video likewise shows ruined buildings—an earthquake hit the town in 2007—but otherwise is very different. While Kazma’s work depicts its site soberly and quietly, allowing viewers time to form judgments, María Elena is often restless, occasionally frantic, and filled with frustrating images: blurry footage of a polo game, for instance, and cropped shots of people with their heads outside the frame.

The paintings on view were rendered with various materials (oil, acrylic, masking fluid, encaustic, pencil) on MDF or paper. Two diptychs and a triptych, each titled Bocetos para María Elena (Sketches for María Elena), were shown as one frieze. Subjects focused on in the video dotted its surface, as did lists of statistics (of what was not made clear) and train station names. Lines tracing from panel to panel suggested those on transportation maps. The work read as a spare sketch of how a barren region is prospected: the exploration, the building of its infrastructure, the movement of people. Another work, Diagrama 82, was a map of Chile with the country’s outlines carved into the panel support and the mining areas highlighted in orange.

Smith’s video certainly casts a dubious eye toward the historical exploitation of the “new world” for natural resources. Yet it also, more urgently, asks the viewer to consider what role industrialized mining should play in current and future conceptions of property and in relation to our environmental responsibilities. Smith observes how the earth’s crust in María Elena is still being blown apart to release valuable saltpeter, and she looks, too, to the stars, as if to ask where our hunger for resources will take us. Her study offers the viewer no easy, omniscient perspective, but instead a disjointed collection of insights to decipher. But one thing is certain: it is as much a warning of things that might come as it is a portrayal of anachronistic industrial operations.