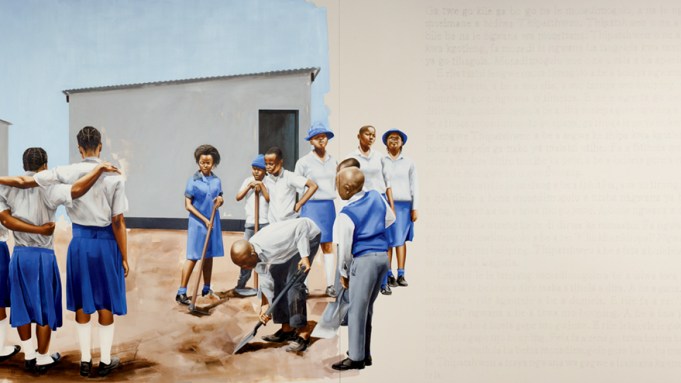 Botswana-born, New York–based painter Meleko Mokgosi portrays scenes of daily life in southern Africa, often combining his images to create dramatic multi-panel filmstrip-like sequences. He generally bases the paintings on photographs, whether those he takes during annual visits home or those shot by assistants living in his native city of Francistown. Installed around the perimeter of a gallery at UCLA’s Fowler Museum, his latest cycle of twenty canvases continues his series “Democratic Intuition” (2014–), in which he investigates the complexities, contradictions, and precarities of systems of power in southern Africa that at times run counter to the interests of citizens. The new group, “Bread, Butter, and Power” (2018), centers loosely on gender and class dynamics. In these paintings, Mokgosi subtly but decisively champions the undervalued work of women in southern African society, while conveying hopes for reclaiming a sense of self-determination for the formerly colonized region.

Scenes installed in different parts of the room act as counterpoints or continuations of a diffuse narrative. One panel shows a man and a woman sitting casually beside what appears to be a humble brick home. The man relaxes on a chair with a cold beverage at his feet, while the woman sits on the ground with a bowl in her lap, possibly doing prep work for an upcoming meal. On an adjacent wall of the gallery, a beautiful young woman—her brown skin luminescent, due to Mokgosi’s innovative technique of using clear glaze rather than gesso for his grounds—is seen lounging on a contemporary leather chair in an upscale interior. The juxtaposition of these images leads one to wonder why one woman is engaged in menial labor while the other relaxes in relative luxury, but the question goes unanswered. A similar conundrum is posed by two images focusing on schoolchildren. The first depicts a group of children in plain blue-and-white uniforms not studying but, for some undisclosed reason, digging a hole outside their school. The second shows students in expensive-looking burgundy-colored uniforms posing and smiling as if for a year-end school photo.

Other scenes seem to allude to the legacy of apartheid and the fraught racial dynamics that remain in southern Africa. In one, a smiling black nanny lovingly tends to two small white children. The three seem cheerful and content together, but one can’t help but wonder what might occur as the years pass and the differences in their social standing intensify. A painting at the opposite end of the gallery features a young miner sprawled listlessly across a bed in a spartan bedroom, perhaps after a day of laboring for one of the foreign-owned operations that export gold, diamonds, minerals, and other natural commodities from the region. With these two images, Mokgosi conveys the reality that many black southern Africans hold occupations that enrich populations other than their own.

Interspersed with the seductively painted scenes are several text panels. A couple of them are written in Setswana, which was an oral tradition in southern Africa prior to its being transcribed, in the nineteenth century, by European missionaries and colonizers. Mokgosi attempts, in a sense, to reverse and erase that effort by using graphite and bleach—mediums that either are susceptible to or cause erasure—to write out two African folktales that warn against selfishness. (Scanning a QR code nearby with your phone brings up videos of graduate students explaining the stories in English.)

Leaning against a column at the center of the gallery is a sculptural intervention consisting of a rolled-up painting. A few days before the exhibition’s opening, museum staff were surprised by the arrival of this one last work. The painting was to be displayed unopened and unstretched, so that only a partial view of a man wearing a gold medal and wielding a trophy would be offered. Wrapped in plastic and largely inscrutable, the work suggests that southern Africa might have been able to achieve certain successes if it hadn’t been constricted by colonialism. The piece is one of several instances where it seems Mokgosi is attempting to save a bit of his work for himself and his compatriots.

From Discounted AirPods to Samsung TVs, These are the Cyber Monday Tech Deals to Shop Now