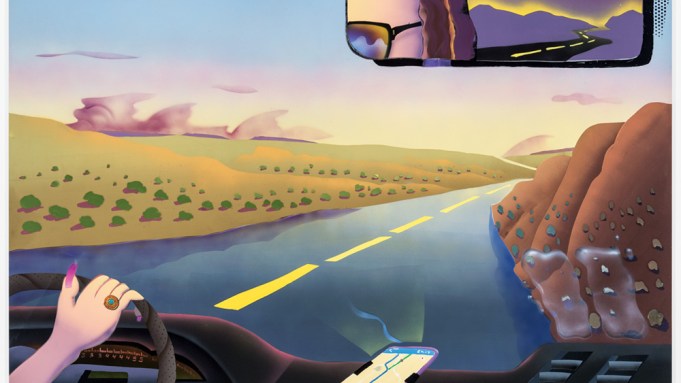 Melissa Brown’s recent paintings at Derek Eller amounted to something like a storyboard for a twenty-first-century American epic. A short narrative written by Brown in which she recounts a recent road trip she took through the South was included in the press release, suggesting that the paintings were inspired by these travels. During the trip, Brown visited the folk artist and Baptist minister Howard Finster’s Paradise Garden, a sculpture park in Northern Georgia filled with mosaics, found-object assemblages, and whimsical outbuildings he constructed. Recalling Paradise Garden, Brown’s paintings offer an eccentric world in which the everyday serves imaginative ends.

For the paintings, which are on Dibond or aluminum sheets, Brown utilized an array of techniques (screen print, spray paint, stenciling) to produce surfaces whose variety matches that of the landscapes she depicts. Tom and Di’s Rustic Inn (2017) is set in an interior space presumably at the namesake inn. A neon sign hangs in the window, facing the field outside and casting orange and white light into the dusk. On an electric blue table below the sign sit a taxidermy weasel and a clock in the form of a birdhouse; the painting is effectively a still life, though one with a spooky quality.

Frequently, Brown elevates things that might otherwise be considered banal. The strip mall seen outside the window of the Mexican restaurant that serves as the setting for El Pueblito (2017) becomes a glimmering modernist cathedral. Brown renders the restaurant interior using a mix of colors and patterns: aubergine-hued walls, for instance, are juxtaposed with a striped tablecloth and the wood grain of window molding. A wall clock hanging beside the window features an image of a howling wolf.

Brown’s portrayals are always a little wonky, a quality that animates the forms with a sense of vitality. Objects, buildings, and landscapes stand in for humans when such actors are not present. In Swamp (2018), an alligator chomping on a newspaper basks on the banks of a pond. Reflections of a human figure appear in place of the gator’s irises. The surface of the pond features undulating black and white ripples, while the grass is rendered with an intricate bamboo pattern. Throughout the landscape are various types of tropical plants, some of which recall vintage computer graphics, lending the work a nostalgic feel.

I,25 (2018) shows a woman driving through the desert. Given Brown’s road-trip narrative, it’s easy to assume the driver is Brown herself. She casually grips the steering wheel, her face partially visible in the rearview mirror. The sun is setting in the landscape seen behind her in the mirror’s reflection, as she drives toward the daylight, a hopeful detail that suggests the painting represents the beginning of her journey. Brown’s capacity for crafting a narrative, as well as her canny plays of specificity and mystery, leaves one eager to accompany her to her next destination.

Jennifer Lopez Is an Assassin Protecting Her Daughter in New Trailer