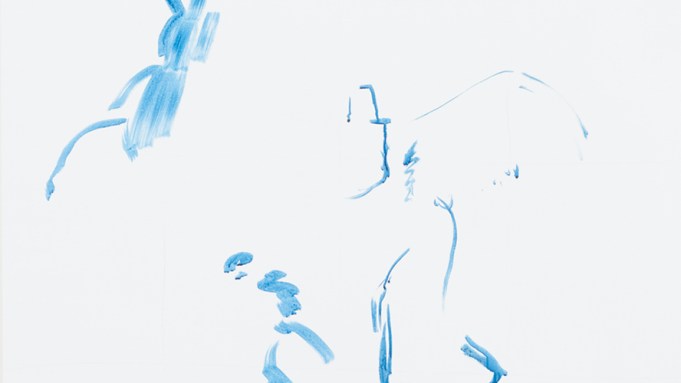 Michael Krebber is known for understated objects and an overstated reputation. My goal in visiting his latest exhibition was not only to scrutinize the paintings but also to experience a new arc in what has been a long and stimulating narrative of cultivated persona. Past exhibitions have either been aggressive (such as “Here It Is: The Painting Machine,” at Greene Naftali in 2003), humorously restrained (like his 2008 Greene Naftali show of cut-up surfboards), or slyly intellectual (such as when he hired a commercial sign painter to transcribe his lecture about the problems of painting over screen prints of old comic books for a trio of shows in 2007). This exhibition was lighter, freer, and even lyrical in its loose and gestural grammar.

All the paintings on view were acrylic on canvas. Most used a single pinkish-cream color called Unbleached Titanium; two were rendered in a serene blue. Employing medium-size brushes and a small roller, Krebber composed spare works that leave every stroke, smear, and drip in plain sight, against a pristine white background. The minimal color only amplifies Krebber’s diverse handling of the nuanced planes of pigment, which range from sharp to splotchy, opaque to diaphanous, fluid to stippled, wispy to fat.

As I made my way around the gallery, two quotes kept repeating in my head. The first was from John Kelsey’s 2005 Artforum article on the artist, “Stop Painting Painting”: “All the paint in Krebber’s last two shows [in New York] couldn’t fill one small canvas by Dana Schutz or John Currin.” The second came from Krebber himself, who wrote in a press release for a 2010 show at Galerie Buchholz in Berlin: “I should like to perform in this exhibition that it doesn’t matter what I do, whether it is good or bad, or that it conforms however to whatever criteria—the fact that I call myself an artist is enough here.” While the quotes refer to specific exhibitions, I find them applicable to Krebber’s work in general, which is characterized by an economy of material and a simultaneous affirmation and negation of painting as a medium. Krebber claims to occupy an aesthetic realm where no intent can go wrong—a realm of a romantic irony steeped in both skeptical detachment and radical self-acceptance.

Krebber titles his works after finishing them, usually as jokes. The works in the recent show were all titled with the phrase “Herbes de Provence,” referring to that generic blend of dried herbs from the region of France where Cézanne, van Gogh, and other great painters famously worked. Krebber’s Herbes de Provence, La baguette (2018) features a form resembling a cropped loaf of bread at the lower left side. Herbes de Provence, Le drapeau américain (2018) suggests a haphazard sketch of the American flag sans stars. In Herbes de Provence, Gitanes (2018), a favorite of mine, perfectly placed strokes of blue paint render a floating ethereal angel in front of a faint, loose grid of pencil lines. Krebber’s naming of this body of work “Herbes de Provence” seems to poke fun at notions of provenance and authenticity: while you can buy the herb mixtures at the supermarket, you might not be getting the real flavor of Provence.

Krebber is a polarizing figure. In 2015 Jerry Saltz wrote a widely read critique saying that while the artist’s self-reflexive irony was vital in the early ’00s, the tactic had since been subsumed by the market, leading to an excess of boring and lazy paintings. But while the artist problematizes painting’s pretentions with nonchalant dandyism, the works, most of the time, are quite pleasing to look at, even if they may have taken only ten minutes to make. The perceived “laziness” serves as a comment on the art world’s paradoxical denial of its own power structures by sometimes welcoming rhetorical negation and self-aware levity. What at first seems apolitical, nonobjective, and innocuous is in fact loaded with perplexing questions related to status, taste, inequality, and value. Krebber is the post-painting painter par excellence, capable of both contriving elaborate conceptual gambits and creating generous, occasionally sublime surfaces.