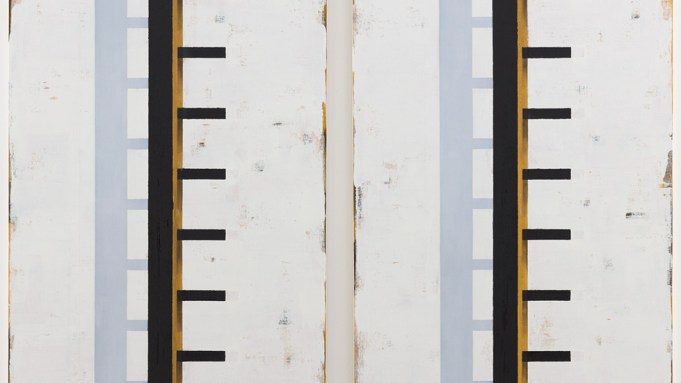 British painter Michael Simpson studied alongside David Hockney and R.B. Kitaj at London’s Royal College of Art in the 1960s and exhibited steadily, if infrequently, over the next six decades, but his work has become increasingly visible since he joined Blain|Southern’s roster in 2016. The thirteen recent paintings in this exhibition represented the artist’s three core motifs: benches, confessionals, and leper squints, the small windows cut into the facades of medieval churches so that lepers and other social outcasts could view sermons from outside.

Simpson worked exclusively on his “Bench Paintings” between 1989 and 2009, before embarking on the ongoing “Squints” series in 2012 and the “Confessionals” in 2015. He renders his motifs as clean, elegant geometric forms against flat monochrome grounds or within spare architectural settings, typically using a restricted palette of black, white, and gray, with occasional dashes of muted color. The formal asceticism of the paintings invites comparison to Minimalism, but Simpson’s most enduring influence is Vermeer, as seen in his crisp, exacting way of situating objects in space and his striving for coherence with maximum economy.

In his work, Simpson, an avowed atheist, often alludes to the cruel hierarchies and injustices imposed by organized religion, framing religious institutions as sites of exclusion and discomfort. The confessionals shown in the large-scale Confessional 5 and Confessional 6 (both 2018–19) stand like sculptures amid expanses of white. In each of these paintings, the screen beside the low penitent’s seat is elongated to emphasize the cleric’s power over the sinner. The “Squint” paintings, eight of which were included in the exhibition, portray a range of structures—stepladders, cages, pillars with rungs, and stepping blocks—placed to allow access to small viewing portals high in the depicted walls. Yet in each case, observation is thwarted: the squints are covered or unreachable, and the structures often seem precarious. Squint 45 (2016–19), for instance, shows a steep, spindly stepladder leading to a tantalizingly half-closed aperture, while in the diptych Squint 69 (2019), two viewing pillars seem to stand too far to the side of the slitlike openings.

While ostensibly concerned with the evils of religion, Simpson’s paintings are strangely dispassionate—perhaps because they are first and foremost about looking. “When you look at a painting, the first thing that you must see is the painting itself and then the image,” Simpson said in a 2016 interview. “If this happens, the painting is halfway to working.” In the massive diptych Squint 68 (2019), each panel portrays a strict frontal view of a stepping block below a small square aperture. The blocks are rendered so convincingly that it appears one could almost walk onto them, the scenes implicating the viewer.

Two diminutive “Bench Paintings” from 2019 depict a pale yellow bench hovering obliquely within a pastel pink field. In one, a nebulous cloth rests underneath, its ill-defined form contrasting conspicuously with the rigidly contoured bench; in the other, that space is empty. Throughout the show, Simpson’s limited formal lexicon helped direct attention to minor variations among the compositions—the streaks and scuff marks on the surface of a canvas, subtle tonal modulations, rough unpainted edges. As with Vermeer’s work, the longer one looked at these deceptively simple paintings, the more one saw.

This article appears under the title “Michael Simpson” in the December 2019 issue, p. 105.