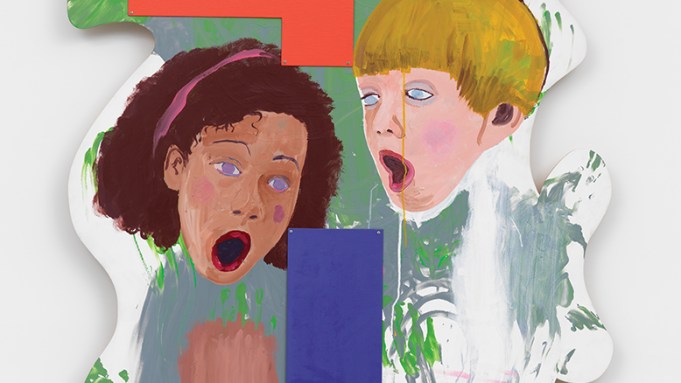 Hans Hofmann hung over this exhibition of Mike Kelley’s paintings like an oppressive father figure to rebel against. Epitomizing painting with a capital “P,” the early Abstract Expressionist’s work heavily impacted the curriculum taught at the University of Michigan when Kelley attended school there, in the 1970s. Kelley chafed at the formal, painterly, and, above all, academic version of art that his teachers espoused, calling his education “a form of mental abuse, of brainwashing.” He thus pursued mediums like performance, installation, and video, using them to plumb the dark psychological depths of good old-fashioned American culture. In the 1990s, however, he returned to painting with a body of work titled “Timeless Paintings,” in which he explored residual traumas from his education and sought to undermine the medium itself. The exhibition, which was organized by guest curator Jenelle Porter, revolved around this series and the various subseries it spawned.

Kelley evoked Hofmann’s famous “push and pull” technique—in which planes of color appear to emerge and recede from the canvas—only to relegate it to gimmickry. The Prenatal Mutual Recognition of Betty and Barney Hill (1995) presents two Hofmann-like geometric planes of flat color as unmoored shapes that hover around ghoulish, washy renderings of the heads of a boy and a girl who appear awestruck, their mouths agape. The Hills were a couple who in 1961 claimed they had been abducted by aliens. Their story became the first widely publicized alien abduction account in American history. In citing both Hofmann and the Hills in his work, Kelley places the “high” culture of painting and the “low” of American pop culture cheek by jowl.

A similar juxtaposition is found in works that turn the hilariously juvenile magazine Sex to Sexty—which, according to the exhibition materials, Kelley called the “bible of hick erotica”—into formal exercises in color, composition, and conceptual sign play. These works, from a series called “Missing Time Color Exercises,” are framed grids composed of copies of Sex to Sexty interspersed with monochrome panels that serve as stand-ins for issues Kelley was missing and that display paint hues the artist mixed to coordinate with the neighboring issues. In Missing Time Color Exercise #3 (1998), an issue titled Hippo Dippo and bearing a cover illustration depicting a lusty male hippopotamus at a zoo about to mount a female companion residing ass-up in a pool is placed beside a square of soothing, tasteful heather blue more appropriate to a spa or the walls of a decorative arts museum than the crass Sex to Sexty. Positioning the two in mismatched company, Kelley sets up a playful, heightened tension.

While sex was everywhere in the show—note the two tip-touching boners in Lobed (2008–09)—certain works dealt with the notion of painting for painting’s sake. For instance, works from the 2003 “Carpets” series, composed of framed pieces of carpet imprinted with paint, served as a tongue-in-cheek takedown of Color Field abstraction, but one that was a little simplistic for my taste. More complicated and nuanced were Bouquet #2 (Green) and Bouquet #4 (Orange), both 1998, which are not the Matissean or Hofmann-like still lifes that the titles might suggest, but floor-based groupings of plastic cups of dried paint. They offer less a skewering of painting than its disassembly into constituent parts, presenting the sort of objects generally discarded after a painting is finished rather than the painting itself. Here, we see Kelley’s approach to the medium at its best, when it becomes not about the canvas at all, but about new and inventive ways to consider painting beyond the frame.