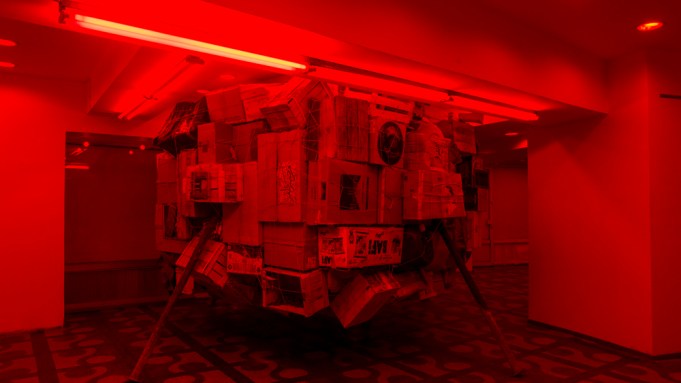 Mike Nelson, a British artist twice shortlisted for the Turner Prize, is best known for labyrinthine installations that simultaneously engage with and transform their architectural surroundings. For his breakthrough work, The Coral Reef (2000), first constructed at Matt’s Gallery in London and restaged at Tate Britain in 2010, he created a network of fifteen rooms in which furnishings and items ranging from drug paraphernalia to religious ephemera to surveillance equipment hinted at different functions and belief systems. In Magazin: Büyük Valide Han, exhibited as part of the 2003 Istanbul Biennial, he turned two spaces in the titular seventeenth-century caravanserai, or inn for passing traders and their caravans, into a photographic darkroom strung with archival pictures of the structure’s facade that served to trace the site’s history. At the 2011 Venice Biennale, he re-created the darkroom in the British Pavilion, linking two cities that have historically functioned as bridges between East and West.

Nelson returned to Istanbul’s historic quarter for his latest installation, Projektör (2019), which was housed at the Gürün Han, just around the corner from the Büyük Valide Han. Built in 1954, the Gürün Han was an important center of Turkish commerce for decades, but today is largely empty. The complex is structured like a mall, with multiple floors of shops that traveling merchants could rent to sell their wares. Projektör spanned the entire seventh floor, occupying sixteen shops. The installation incorporated sculptures, videos, and architectural interventions into a mise-en-scène that suggested a film set. Indeed, Nelson had conceived the work as an homage to Jean-Luc Godard’s Alphaville (1965), in which a detective wanders through deserted buildings in a totalitarian Paris of the future, tasked with finding a rogue agent and destroying the despotic regime.

Projectors and monitors placed throughout the shops showed videos comprising footage of Istanbul that Nelson shot while in taxis going from the airport to the historic center on his trips to the city over the past three decades. Each video interweaves sequences from trips taken in different time periods. As a result, Byzantine and Ottoman monuments emerge and disappear in the background, the taxi drivers’ speech patterns reflect changes to the vernacular, and new trams, shopping malls, and infrastructure attest to the city’s shifting topography.

The largest shop in Nelson’s installation contained a reconstruction of his Agent Dickson at the Red Star Hotel (1995): a spaceship-like sculpture, titled after an episode in Alphaville, made of cardboard boxes and wooden crates placed on metal stilts and bathed in red light. The exterior is decorated with newspaper ads from various eras, images of iconic Turkish politicians and soccer players, and inscriptions in Arabic. A square hole offers a glimpse of the structure’s interior: a sparsely furnished room replicating working-class living quarters from the 1960s, its walls decorated with portraits of an imam and of the former left-wing Turkish prime minister Bülent Ecevit. A shortwave radio receiver and a birdcage hang from the room’s ceiling, while a camera and a prayer rug lie on the floor next to a worn book on Mustafa Kemal Atatürk, founder of modern Turkey. Like the videos capturing changes to Istanbul’s historic center over the course of thirty years, this structure collapses together divergent moments in Turkey’s economic and political history. In such works, exhibited against the backdrop of the all-but-defunct Gürün Han, Nelson shows the ruthless effects of modernization on an ancient city transformed by capitalist forces.