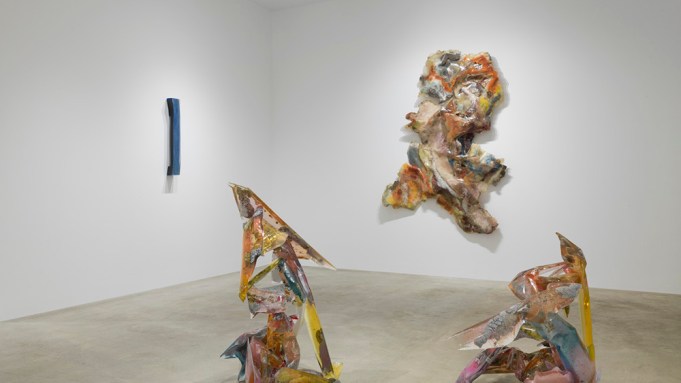 A casual visitor who just wandered into Richard Van Buren’s exhibition without glancing at the name on the wall could easily have thought it was a two-person show. Artist #1, this viewer might have surmised, was a Minimalist sculptor favoring understated geometric forms and nondescript materials such as lengths of wood straight from the lumberyard and neutral-colored polyester resin. Artist #2, by contrast, was a hedonistic maximalist, creating assemblies of jagged polyester-resin elements with gaudy metallic surfaces and extravagant palettes that evoke candy shops, exotic bird sanctuaries, and Italian opera costumes. This visitor would no doubt have been shocked to find out that Artist #1 and Artist #2 were one and the same person.

Even for better-prepared viewers, this gathering of ten works by Van Buren—four made between 1967 and 1971 and six between 2018 and 2019—presented challenges. How, one wondered, did the artist move from the relatively simple structures of early works like Bykert Goal Post (1968), a freestanding “goal post” built of two-by-fours coated in resin thick enough to mute the color of the wood but clear enough to keep the material’s irregularities visible, to the chromatic fireworks and formal extravagance of his recent pieces? In fact, seeds of Van Buren’s current style are already on display in Beirut, a large wall relief from 1971 in which buckling, punctured layers of resin and fiberglass have been liberally infused with glitter and colored pigments. Although formally restrained compared to recent cantilevered agglomerations like the floor sculpture Dervish I (2019) and the wall relief Carrot Top (2018), Beirut reveals that by the early 1970s, Van Buren had not only bid farewell to rectilinearity but had also begun a dialogue with the natural world. For all its artificial colors and industrial materials, Beirut recalls nothing so much as the surface of a frozen lake riven with air bubbles and stray debris. Interestingly, the year before, Van Buren had begun experimenting with casting his polyester resin sculptures in snow.

Van Buren’s development in the late 1960s can be charted by his inclusion in two emblematic exhibitions: “Primary Structures,” the 1966 Jewish Museum show that is widely credited with defining Minimalism; and “A Plastic Presence,” a traveling exhibition that debuted at the Jewish Museum in 1969 and focused on post-minimalist work employing new synthetic materials. (The only other artist included in both shows was Richard Artschwager.) By the late 1970s, Van Buren had abandoned cast polyester resin because of his concerns about its toxicity. After experimenting with many different materials, he returned to polyester resin about five years ago, now taking more precautions in the casting process. Another significant change in the late 1970s was that Van Buren stepped away from the world of galleries and museums for some years, largely to focus on collaborative projects with his wife, dancer-choreographer Batya Zamir, creating sculptural pieces that she could interact with in performances.

The titles of several recent works (the aforementioned Dervish 1, Alicia’s Dance) reference bodies in motion, and the sculptures themselves convey a vivid sense of movement, thanks not only to how their parts continually thrust and parry into space, but also to their color and light effects. The phrase “mixed mediums” hardly does justice to the variety of eye-catching stuff—silvery pins, downy feathers, glistening pearls, seashells, and a cornucopia of metallic paint—that Van Buren embeds in his resin shards. As delicate and wondrous as fossil-rich pieces of amber, these works can be fully appreciated only by prolonged, up-close viewing. After reveling in their retinal and tactile opulence, one turned back to the earlier work with a keener appreciation of how, even in his Minimalist phase, Van Buren was able to inject luminosity into volumetric forms.

This article appears under the title “Richard Van Buren” in the November 2019 issue, p. 102.