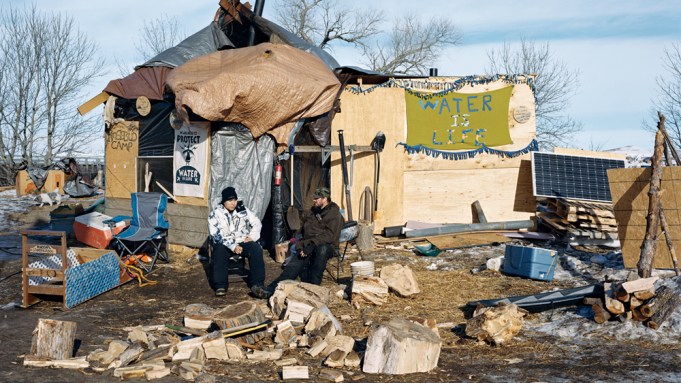 While studying under photographer Garry Winogrand at the Cooper Union in New York in the early 1970s, Mitch Epstein trained his eye to catch moments of beauty tinged with foreboding. In the first few decades of his career, he displayed this talent in various series, on subjects ranging from Americans at play to people and landscapes in India, Egypt, and Vietnam. Such works sometimes hinted at sociopolitical critique, but their meanings remained ambiguous, with formal beauty taking precedence over specific messages. Epstein’s practice shifted in the aughts, beginning with the series “American Power”: an indictment of the energy industry in the United States. Since then, his work, while still visually arresting, has become more urgent and direct.

In 2017, Epstein began a series titled “Property Rights,” for which he photographs sites of protest and immigration across the United States, including the Sioux reservations of North Dakota, the Arizona-Mexico border, and rural Pennsylvania, foregrounding the tension between the sublime natural beauty of the American landscape and recent political flashpoints that have ignited across it. His recent exhibition at Sikkema Jenkins & Co. comprised twelve large-format prints from the series.

The photographs lay bare the complex, entwined relationships between citizenship, politics, climate, and land use vis-à-vis Indigenous communities, immigrants, and activists. In 2015, the Standing Rock Sioux Tribe and thousands of non-Native protesters came together to fight construction of the North Dakota Access Pipeline: an ongoing initiative to install a 1,172-mile-long underground crude-oil transportation system, a section of which would cross the Sioux’s sovereign land. In Standing Rock Prayer Walk, North Dakota 2018, five figures walk in a line across a snowy field. Bright strips of fabric that adorn an eagle staff carried by the man leading the procession punctuate the white landscape. While the protests at Standing Rock centered on water pollution, the movement has exposed the persistent threat of displacement faced by Indigenous people.

Epstein’s photographs frequently suggest the aftermath of an event, or the quiet before the storm. Joshua Flyinghorse and William Nelson Williams III “Nine Tails” Rosebud Camp, Standing Rock Sioux Reservation, North Dakota 2017 shows an encampment where protesters lived during Standing Rock demonstrations. Two men sit in front of a makeshift dwelling composed of patchworked building materials. A pile of chopped wood lies on the ground before them, while banners bearing the slogan water is life hang from the building. The camp was dismantled later that year, and the men’s solemn expressions and the general disarray of the site suggest the twilight of their endeavor.

In recent years, protests have ensued across Pennsylvania as energy companies (citing eminent domain laws) have attempted to gain access to forest land in order to construct another massive pipeline. Tree-Sits, Camp White Pine, Huntington County, Pennsylvania 2017 depicts two towering conifer trees with tentlike structures suspended from their upper branches. Environmental activists known as “tree-sitters” live in such shelters in an attempt to stop the clear-cutting of forests. Buckets and jugs for water collection and waste removal hang from the structures, as inhabitants might not leave the trees for months on end. Epstein’s images remind the viewer that resistance movements can endure longer than the news cycles covering them, and many individuals completely restructure their ways of life in order to stand up for their beliefs.

Bisbee, Arizona 2017 is a striking close-up of a bulletin board with dense layers of torn pieces of paper announcements stapled to it. The display recalls the white, papery surface of birch: a tree that has been an essential natural resource in Indigenous communities for millennia. Here, the characteristic black flecks of the “bark” are bits of text in different fonts. Most of the words are illegible, but nation, meditation, and water emerge from the surface, underscoring some of the primary concerns of this affecting series.

This article appears under the title “Mitch Epstein” in the November 2019 issue, p. 101.