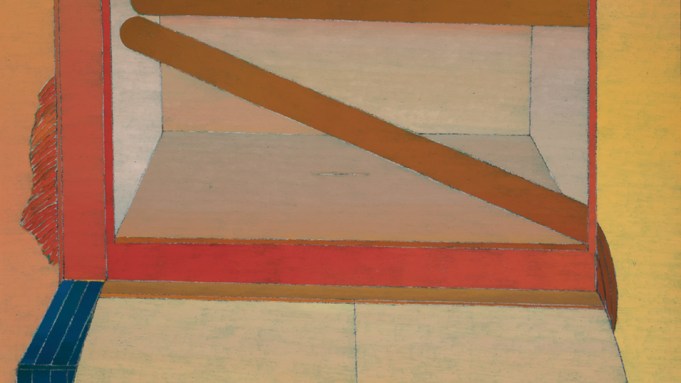 With their dusky sunset and sunrise palettes and their landscape-evoking forms, the paintings in the Berkeley Art Museum and Pacific Film Archive’s small-scale retrospective of work by Miyoko Ito (1918–1983) could very well have been used as cover art for Brian Eno’s ambient releases from the 1970s. Like those albums, Ito’s paintings offer restrained compositions that are diffusely atmospheric and generically pretty when encountered in passing but highly absorbing when given closer attention.

Guest curator Jordan Stein brought together twelve canvases spanning the years 1959 to 1983 in a sensitive arrangement that highlighted the Berkeley-born artist’s remarkable color sense and traced the development of her fantastic approach to figurative abstraction. Ito’s paintings are landscapes in only the loosest sense, as suggestive of sparsely dressed psychic interiors as they are of mountains or inlets. Ito employed forms resembling, variably, rods, tongues, clouds, and curtains, creating nested or stacked arrangements. Frequently, she incorporated scenic openings that, as with the trope of a window within a painting, create a sense of distance. In Oracle (1967–68), an orange cloud contains a boxlike form inset with a design recalling herringbone parquetry. The upper half of Tabled Presence (1971) features a proscenium of sorts that reveals what could be construed as a room, the dimensions of which are mirrored in a sloping plane that extends from it.

Ito’s careful application of bands of color to create an ombre effect further destabilizes the compositions, making it more difficult to parse background and foreground, while her colors shimmer and smolder. In Island in the Sun (1978), a domelike carmine and crimson form suggesting the titular landmass glows against a shifting color field whose aquamarine and sky blue hues are so delicately applied that their transitions are almost imperceptible. One has to look at the edges of the canvas to see the various layers of underpainting that produced such subtle effects.

Hanging out at the sides of Ito’s canvases also allows one to notice that many are only partially nailed in to their frames. The halos of nails convey Ito’s willingness to rip works out and start again—sometimes decades after she had set them aside—along with a related sense that any view she produced was momentary, contingent: one in a series of possible images. Ito’s life was marked by abrupt transitions and fresh starts: months before her graduation from the University of California, Berkeley, in 1942, the newly wed artist was sent to Tanforan, an internment camp south of San Francisco, under Executive Order 9066. After the camp closed, she embarked on a graduate study of painting at the School of the Art Institute of Chicago, settling into the city that would shape her career and that she called home for the rest of her life. Ito once remarked, “Each painting is a beginning again, all over again. Which is so wonderful.” The Berkeley exhibition conveyed the artist’s constantly renewed fascination with her medium and, as the first museum presentation of her paintings in nearly four decades, might itself signal a new beginning for her work.